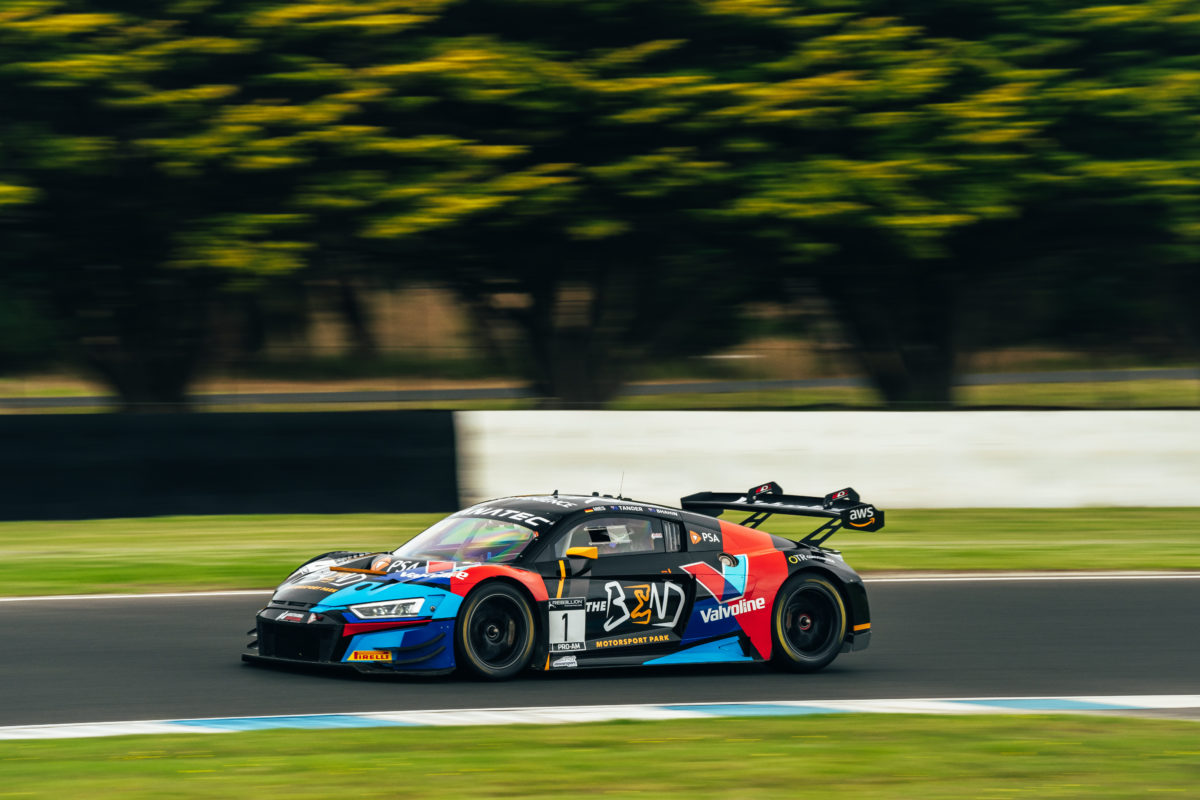 Christopher Mies/Yasser Shahin have headed up an all-Audi podium in Race 2 of Round 1 of Fanatec GT World Challenge Australia Powered by AWS at Phillip Island.

Mies led the opening stint in Car #1 before 2021 Pro-Am champion Shahin forced his way past Tony Bates to reclaim first position with just under 15 of 60 minutes remaining.

Laim Talbot brought a somewhat wounded R8 LMS GT3 to the chequered flag in second position, 2.1745s adrift, after Chaz Mostert sustained damage when he was baulked by traffic in his stint.

Bates ended up third in Car #24, which had been second in the hands of David Reynolds when the mandatory pit stop cycle began, and there was even a fourth Audi in the outright top four as Brad Schumacher took Trophy class honours.

It was three-wide at the head of the field for the run to the first corner of the race, Mies charging down the inside and into the lead from third on the grid, with van Gisbergen sweeping into second from the outside of the track, and pole-sitter Mostert (#65 Audi) shuffled back to third.

Mies gapped the field by a full second on Lap 1, and was approaching an advantage of two seconds when Mostert picked off van Gisbergen on Lap 3 at Lukey Heights.

The #888 Mercedes-AMG quickly came under pressure then from another of the new-specification Audis, and van Gisbergen chose not to fight when Reynolds got underneath him on Lap 4 at MG.

Mostert caught up to Mies on Lap 6 although the latter effectively had five seconds in hand on the former so long as he stayed ahead, given the mandatory pit stop time penalties arising from the results of Race 1, when they finished first and second respectively.

Mostert almost got past when they happened upon traffic on Lap 17, but there was a much more dramatic moment next time around.

He lost almost three seconds relative to Mies by the time he pitted two laps later, handing over the Coin Spot-backed car to Liam Talbot for the run home.

Mies was left out until as late as the mandatory pit stop window would allow before pitting on Lap 19, with a lead of 5.6s over Reynolds and a full 22.4s over van Gisbergen as they followed him into the lane, eventually.

However, such were the time penalties, and the fact that the #24 Audi was free of them by virtue of missing the podium in Race 1, Bates emerged with a six-second lead over Shahin in the #1 Audi.

Talbot was almost 18 seconds behind at the completion of the pit stop cycle and Ibrahim 22 seconds away from the lead in the Triple Eight car.

Shahin caught the #24 Audi by the end of Lap 26, almost three quarters of an hour into the contest, as light rain fell over the Phillip Island Grand Prix Circuit.

The lead changed when he went for a dive on Lap 27 at MG, making contact with Bates on exit before driving off into the distance.

Shahin disappeared to a lead of more than five seconds in the next two laps alone, before Bates also ceded second position to Talbot at MG on Lap 30.

Talbot closed in during what remained of the race but did not have enough time to run down the #1 Audi, settling for a second placing to go with his and Mostert’s Race 1 victory.

Bates got home 18 seconds off the pace in third, while both Schumacher and Brenton Grove made late moves on Ibrahim.

Matt Stoupas won the Am class in seventh outright in his #23 Audi, with Ross Poulakis/Sam Brabham (#34 Mercedes-AMG) prevailing in GT4 in 19th outright.

The field now heads to Mount Panorama for the Liqui Moly Bathurst 12 Hour on May 13-15, which serves as Round 1 of the Motorsport Australia Endurance Championship.