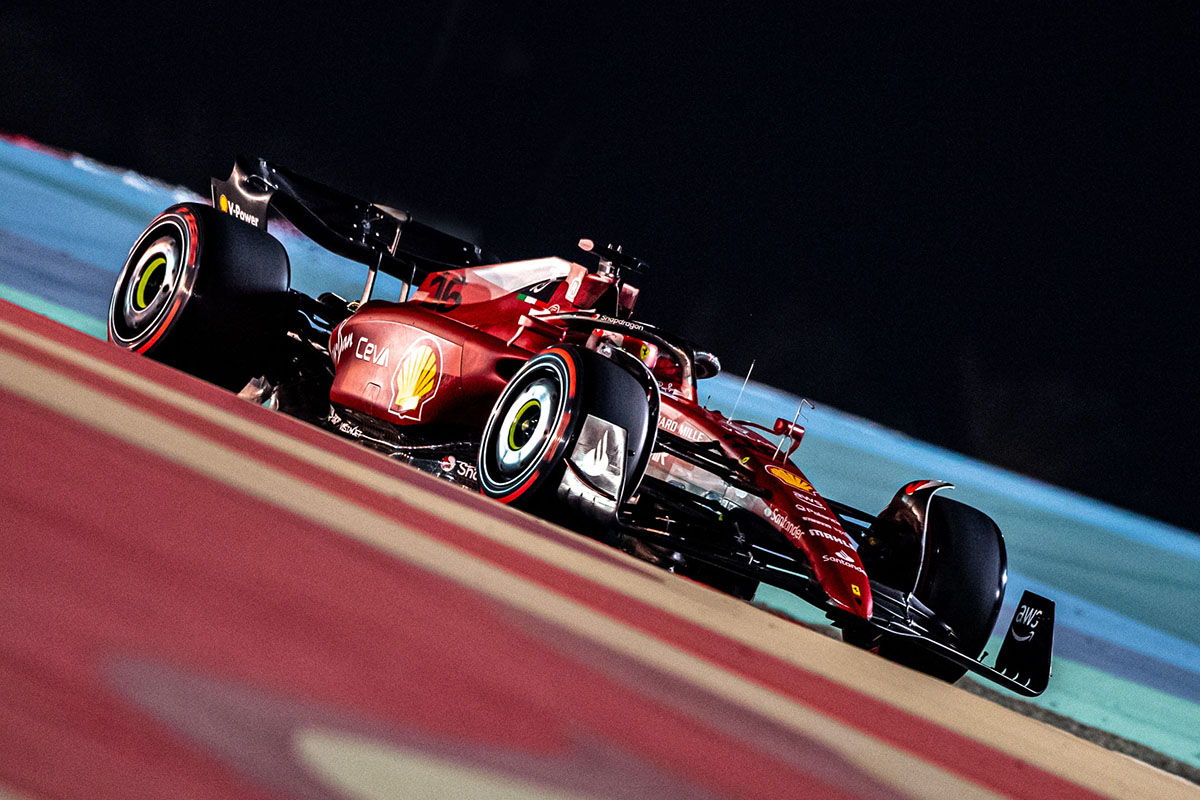 Charles Leclerc has confirmed the pre-season potential of Ferrari by claiming pole position for the Formula 1 Bahrain Grand Prix.

A strong final lap from saw him steal pole from Carlos Sainz as the chequered flag fell, and then withstood Max Verstappen’s late effort.

The 2021 world champion will start second with Sainz joined by Sergio Perez on the second row.

The McLaren duo of Lando Norris and Daniel Ricciardo ran soon after, though neither able to better Gasly.

A strong lap from Verstappen saw the Dutchman record a 1:31.909s, putting the Red Bull on provisional pole comfortably.

Perez looked to be on par to match or better his team-mate, only to fall short by 0.4s at the end of the lap.

It was then Magnussen’s turn, the Haas driver moving into second before Bottas stole the spot seconds later with a 1:31.919s.

Leclerc then shot to the top, recording a 1:31.471s to move into a clear provisional pole.

Sainz made it a Ferrari one-two shortly after, the scarlet duo split by just 0.1s at the top of the timesheets.

The Australian had complained of understeer earlier in the session but progressed to 15th only to be immediately demoted back into the bottom five as Norris improved to sixth, 0.7s faster than his team-mate.

Joining Ricciardo on the sidelines was Yuki Tsunoda, Nico Hulkenberg, Lance Stroll, and Nicholas Latifi at the end of Qualifying 1.

Splitting the pair was Lelcerc with his first lap in the segment, his 1:31.356s leaving him 0.6s away from the lead Red Bull.

Behind them, Magnussen again set an impressive early time with a 1:31.461s, a lap neither Hamilton nor Russell could better with their first Q2 efforts.

The Dane was advised of a hydraulic problem in the Haas, recovering to the pits with five minutes remaining but warned about his power steering.

Both Mercedes headed out with three minutes remaining, Hamilton sitting fifth one spot ahead of Russell as they did so.

With a comfortable advantage in provisional pole, Verstappen did not head back out.

It was a safe bet though tis advantage was eroded with Sainz just 0.03s slower at the end of Q3 and Leclerc third 0.2s.

Missing out on a berth in the Top 10 were Esteban Ocon, Mick Schumacher, Norris, Alex Albon, and Zhou.

The early Qualifying 3 pace was set by Sainz after the front runners all completed their initial effort laps, the Spaniard ahead of Leclerc and the Red Bulls of Verstappen and Perez.

Using a set of scrubbed soft tyres, Hamilton logged a 1:32.158s versus the 1:30.687s of the pace-setting Ferrari as Mercedes held down fifth and sixth, Russell trailing his more experienced team-mate.

There was little between Leclerc and Verstappen for second, the duo split by 0.012s before they began their second and final runs.

They did so with three minutes remaining, the top seven heading out for a final flurry.

Magnussen, Fernando Alonso, and Bottas, who filled the bottom three places of the Top 10, were off sequence slightly as the trio opted for a single timed lap in the segment.

A mistake at the first corner cost Russell the better part of a second through the first split, improving his best time but remaining sixth.

That became seventh when Bottas improved, shadowed across the line by Leclerc who went to the top of the timing screens.

Verstappen’s final effort saw him improve on his earlier effort but fall short of Leclerc, the Ferrari driver’s 1:30.558s just over 0.1s ahead of the Dutchman’s 1:30.681s.

Sainz will start third alongside Perez, with Hamilton fifth and Bottas sixth.

Starting seventh will be Magnussen ahead of Alonso, Russell, and Gasly.