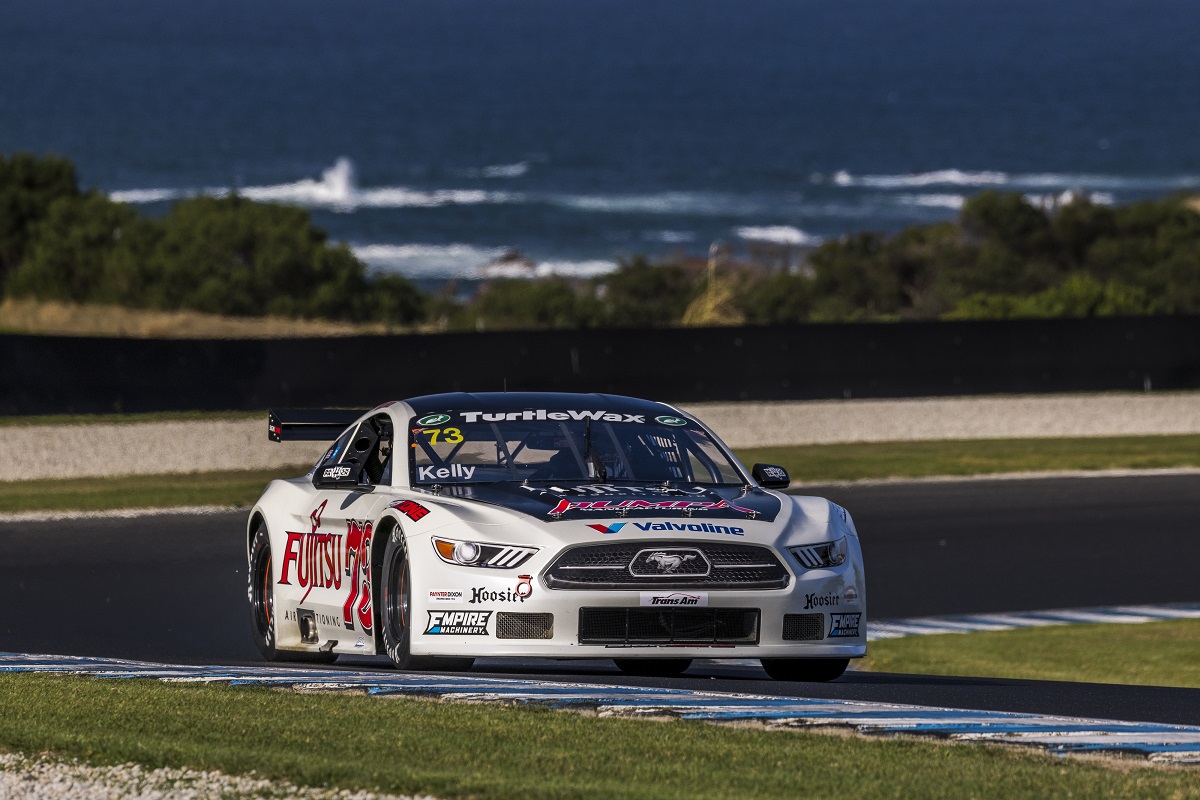 Owen Kelly has come out on top in a three-way battle for victory in Race 2 of Round 2 of the Turtle Wax Trans Am Series at Phillip Island.

The fight for line honours went right down to the last of 13 laps, with added spice in the form of heavy traffic which the front-runners had to navigate.

Nathan Herne looked like pinching first position but ended up being passed by Tim Brook at the final corner and thus dropped to third.

However, Herne’s result is preliminary, with the Garry Rogers Motorsport driver facing a post-race investigation over opening-lap contact with Ben Grice.

He has already been penalised after the fact this weekend, taking the chequered flag first in Race 1 but eventually relegated to fourth after a stewards hearing in the evening for an incident with team-mate Kelly.

The aggrieved party was thus the official winner of that contest and started from first position for Race 2 as a result.

Kelly converted that starting berth into the early lead, with Brook slotting into second spot from the other side of the front row.

Just behind, Grice slewed onto the grass exiting Doohan Corner after nose-to-tail contact with Herne, who had to slow to avoid an even bigger hit when Car #03 slid back onto the bitumen at Southern Loop.

Herne inherited third while Grice was back up to fourth when he went down the inside of Lochie Dalton at the Turn 4 Hairpin, only for Dalton to reclaim the position with a pass on the run towards the Hayshed.

The drama allowed the top two to skip out to an advantage of almost two seconds, before Herne started to claw back that margin.

Those three were all in a bunch as they started Lap 9, and Herne moved into second position when he went around the outside of Brook at the Hayshed on Lap 11.

They continued to run together and encountered several back-markers on the final lap, Herne getting a run on Kelly exiting Siberia but one which was not quite good enough to nick the lead.

Instead, he came under pressure again from Brook in the final corners, the series leader going down the inside of Car #1 at the last bend and picking up a second placing.

Dalton ended up fourth and Nic Carroll drove from deep in the field to fifth, ahead of Brett Holdsworth, Cody Burcher, Jon McCorkindale, Edan Thornburrow, and Kyle Gurton.

Grice, who dropped to seven cylinders in Race 1, faded to 12th by the end of Race 2, and Jett Johnson managed to make the finish in 15th with bodywork falling off Car #117.

Nash Morris ended up last in the 27-car field after a power steering hose apparently came off while he was running fifth on Lap 10.

Race 3 at the Shannons Motorsport Australia Championships starts this afternoon at 14:55 local time/AEDT, and will be streamed live and ad-free on Stan Sport.