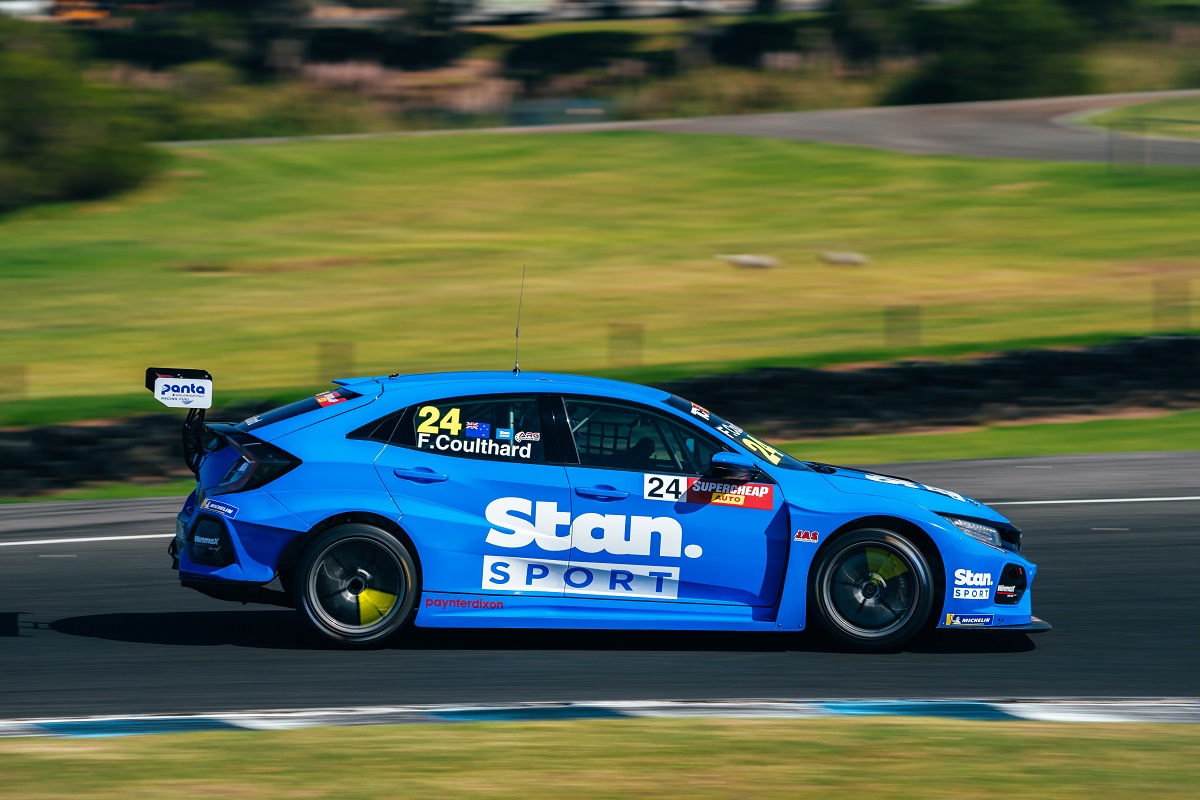 Fabian Coulthard has his first victory in the Supercheap Auto TCR Australia Series, prevailing in Race 2 of Round 2 at Phillip Island.

Coulthard came from seventh on the grid to take the lead early on Lap 3 in his #24 Stan Sport Honda Civic Type R, and was never headed from there.

Joining the Wall Racing driver on the podium were Garry Rogers Motorsport’s Ben Bargwanna in a Peugeot 308 and Tony D’Alberto in the other Wall Honda, the latter after fending off a chasing bunch headed by Jordon Cox.

With the starting grid set with a reversal of the top 10 from Race 1, Bargwanna shared the front row with Michael Clemente (Honda) and it was the latter who led the field to the first corner.

Coulthard benefited from a battle between Aaron Cameron (Peugeot) and D’Alberto to snatch fourth position as the field negotiated the Turn 4 Hairpin for the first time.

The New Zealander was third when he went underneath Lachlan Mineeff (Volkswagen) at Turn 11, just before word came through that Clemente would get a five-second time penalty for starting in front of his grid box.

Coulthard grabbed another position when Bargwanna went to the outside of Clemente at Turn 4 on Lap 2, leaving a gap for the #24 Honda pilot to force his way through on exit.

He was into the lead less than a lap later again when he overtook Clemente through Southern Loop, and began to pull away from the field.

Bargwanna also got by the #15 Honda after three laps more, and Clemente would soon find himself slowing anyway when his fanbelt came off.

He limped back to the pits, just as Cameron had done two laps earlier when he lost a turbo hose while running in fourth position.

As Coulthard continued to circulate with a margin of more than one second over Bargwanna, the fight was on for the final podium position between D’Alberto, Cox (Peugeot) and O’Keeffe (Peugeot).

Neither of the latter two could make a move stick on the car in front, and it became a battle of five when Race 1 winner Jay Hanson and his Melbourne Performance Centre Audi team-mate Will Brown, who started 18th, caught them on Lap 13.

Bargwanna brought his deficit to the lead down to half a second at the chequered flag, but Coulthard never looked under a serious threat from the youngster.

Zac Soutar (Honda) ended up 17th after a mid-race tangle with Bailey Sweeny (Hyundai) which sent him into the gravel at MG, and Josh Buchan (Hyundai) 19th following a post-race penalty.

D’Alberto and Cox now share the series lead, with Coulthard set to start the weekend finale from first position by virtue of cumulative event points.

Race 3 starts this afternoon at 16:10 local time/AEDT, and will be stream lived and ad-free as part of Stan Sport’s coverage of the Shannons Motorsport Australia Championships.