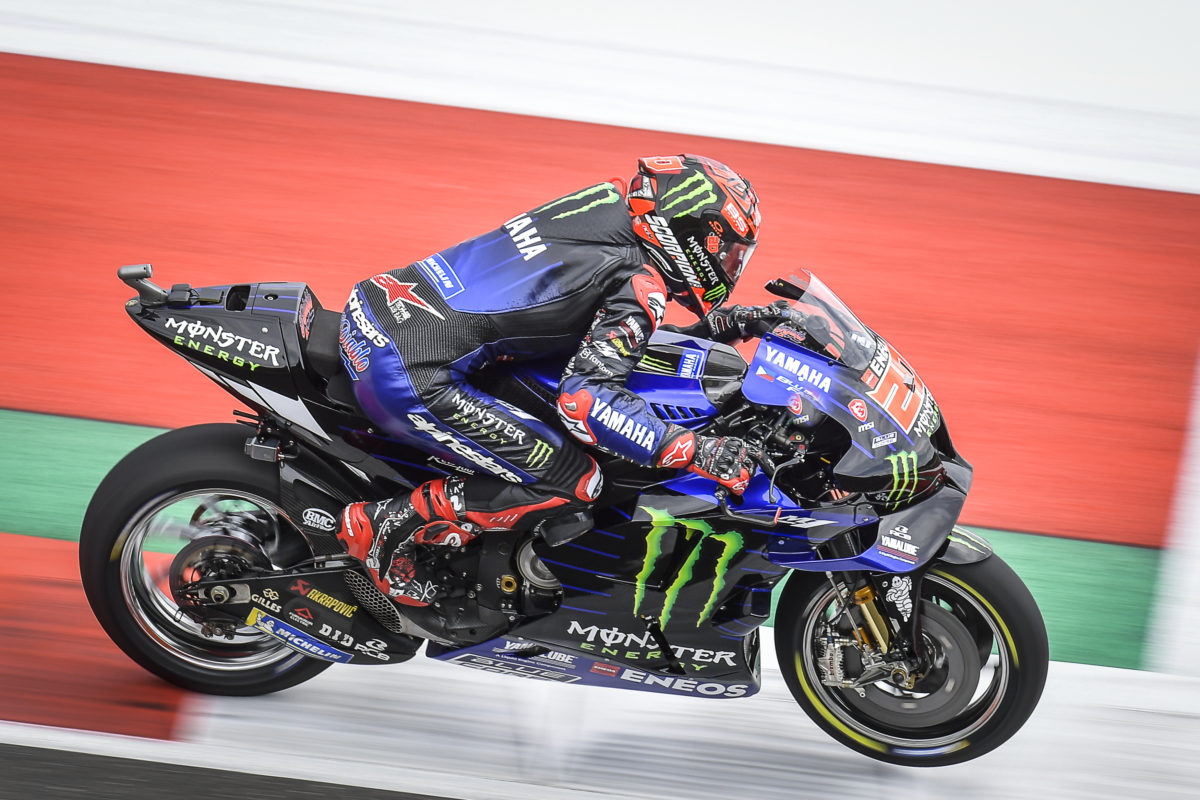 Fabio Quartararo has claimed pole position for the Indonesian MotoGP while Marc Marquez is set to start 15th after two crashes in qualifying.

Monster Energy Yamaha’s Quartararo will be joined on the front row by the Pramac Racing Ducati duo of Jorge Martin in second and Johann Zarco in third, while Jack Miller ended up ninth on the grid and Tech3 KTM’s Remy Gardner 22nd.

Marc Marquez failed to get out of Qualifying 1, and the six-time premier class champion was hardly alone in being caught out by the low-grip surface of the Mandalika International Street Circuit.

At the start of Qualifying 2, Quartararo clocked an impressive 1:31.227s straight out of the box while Francesco Bagnaia (Ducati Lenovo), who did progress from Q1, was second after the opening runs on a 1:31.615s.

Bagnaia went early for his final time attack of the afternoon, and had a ‘stoppie’ of sorts at Turn 10, before improving to a 1:31.507s on his next flyer.

Aleix Espargaro dropped his Aprilia at Turn 10 with less than three minutes to go, triggering a yellow flag which caused obvious displeasure for Miller as he and others rode through the scene, unable to record another lap time.

The net effect was that several riders has just one more chance to improve their starting position, with championship leader Enea Bastianini going third on his Gresini Ducati on a 1:31.504s after the chequered flag.

However, his time on the provisional front row was brief, Zarco bumping him with a 1:31.378s before Brad Binder stole fourth with a 1:31.433s on his Red Bull KTM.

Bastianini was thus shuffled back to fifth and Bagnaia to sixth, from Miguel Oliveira (Red Bull KTM) and Alex Rins (Suzuki Ecstar).

Miller (Ducati Lenovo) ended up ninth, ahead of Aleix Espargaro, Fabio Di Giannantonio (Gresini Ducati) and Franco Morbidelli, the latter of whom crashed his Monster Energy Yamaha early on at Turn 5.

Earlier, Bagnaia, Marc Marquez, and Mir were among those who had to go into Q1 after Friday setbacks and suboptimal weather conditions for Free Practice 3.

Marco Bezzecchi (Mooney VR46) was fastest initially in that opening 15-minute stanza of qualifying on a 1:31.695s, and second at the end of the opening runs after Bagnaia clocked a 1:31.667s.

Marc Marquez was third at that point on a 1:31.830s after a big slide around Turn 16 on his first flyer, and quickly ducked back into the pits as he opted for a two-stop strategy.

The Spaniard was clearly pushing hard even before he folded the front of his Honda and crashed at Turn 13, prompting a dash to a nearby scooter and a ride back to pit lane.

Bagnaia tightened his grip on top spot when he clocked a 1:31.219s at the start of his second run, after which Di Giannantonio took up second position in a 1:31.631s.

Marquez, meanwhile, had made it back to the Repsol Honda garage with 3:48s left in the session, to jump aboard the bike on which he had started the session.

On his third and final run, he was held up by fellow Honda rider Takaaki Nakagami (Idemitsu LCR) through the second sector, cleared him, and then went down again, this time at Turn 12.

Mir (Suzuki Ecstar) lost all hope of making Q2 when he crashed right at the end, while Pol Espargaro had nearly done so minutes earlier as he battled for grip from his Repsol Honda.

The wash-up from all of that is that Luca Marini (Mooney VR46 Ducati) has qualified 13th with a late 1:31.666s, from team-mate Bezzecchi, who crashed late in the piece, and Marc Marquez.

The first ever MotoGP race at Mandalika, a 27-lap affair, is due to start on Sunday at 18:00 AEDT.