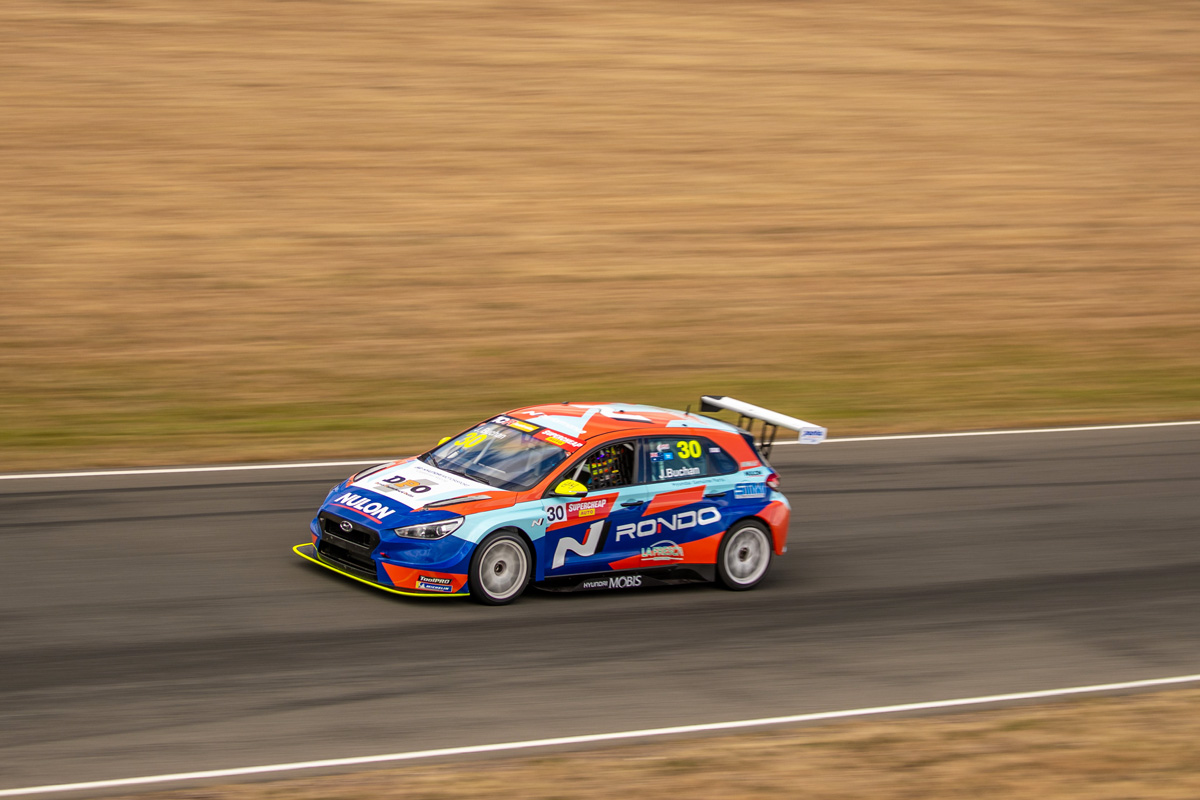 Making the most of Hyundai’s liking to Phillip Island will be crucial this weekend for Supercheap Auto TCR Australia Series leader Josh Buchan.

The second-year HMO Customer Racing driver holds a two-point advantage over Honda privateer Zac Soutar in the standings after taking a trio of top five results from Round 1 in Tasmania.

Phillip Island is the next stop on the calendar, the Shannons Motorsport Australia Championships event beginning today.

Buchan, twice a race winner last year, knows it’s imperative to do well at The Island to build a points margin given two of the final five rounds this year will unfold at Mount Panorama – a circuit notoriously tough for the Hyundais.

Amid extreme wet weather last year, Buchan was disappointed to leave Phillip Island last year with a 13th, DNF and ninth, and is determined to do better this time around.

“Honestly, it’s one of our better tracks,” he told Speedcafe.com.

“We just sort of tripped over ourselves a little bit last year. I was 20th in the third race and came into the top 10. We were only down there through dumb stuff really.

“That was a huge missed opportunity so we were filthy at ourselves last year with PI, so we come here this year, we tested down there, we’re having a red hot go at it, that’s for sure.

“We know that there are chances for good points here.”

The 26-year-old admitted it has been “pretty cool” to be introduced as TCR series leader in recent weeks, but he feels his early season success can be no flash in the pan.

“Obviously it’s a very slender lead and it’s Round 1, but based off what we saw down [at Symmons Plains], we were a bit more competitive than what we probably thought we might have been so it’s pretty exciting,” said Buchan.

“There’s definitely tracks we know we’re going to take a little bit of a backseat for, but it’s nice to know that at a circuit that isn’t one of our strong ones, we performed quite well.

“It’s just really nice to pay back the hard work for everyone in the off-season because our team genuinely did not have a break.

“Our guys were in there on Christmas Eve and Boxing Day. It’s just a good reward early on in the year to solidify the work that they put in, so very happy.” 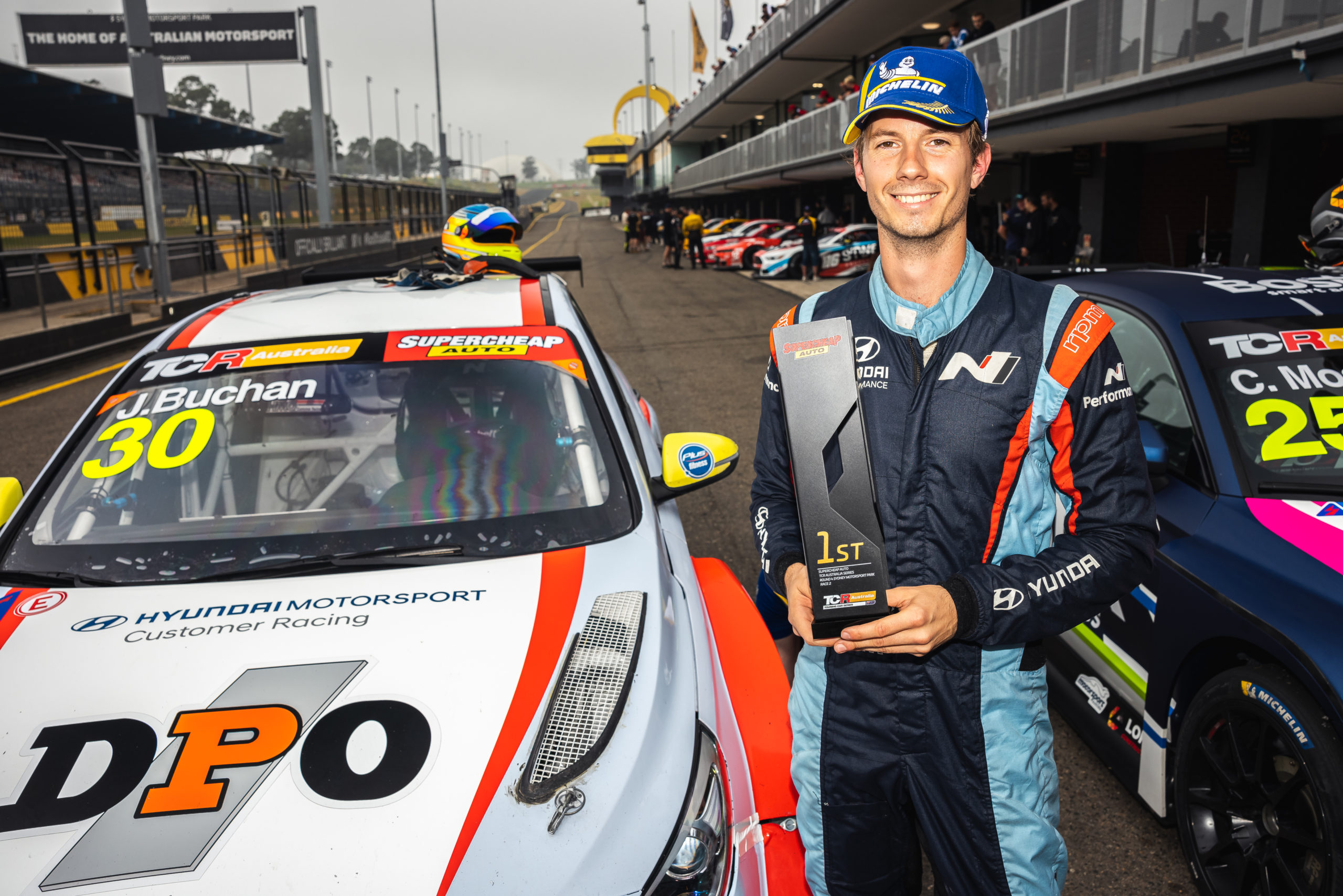 Supercars race winners Will Brown and Chaz Mostert are the only names thus far etched in the history books as TCR Australia title winners. Buchan is confident he can join the exclusive club.

“TCR Australia is all about hanging in there and taking chances when you get them,” he said.

“It’s a year full of swings and roundabouts and if you can have luck in your favour once or twice, you can be in any car on the grid and have a good chance, and we’re fully aware of that.

“I’ve got even more confidence knowing I’ve got the team behind me doing what they’re doing to give me the car I’ve got, so we’re in the mix. There’s no two ways about that.

“Honestly the goal last year was to go out and win, so the goal this year is no different whatsoever. We’re in the mix; I think about 15 blokes are though.

“It’s good, it keeps you on your toes. I haven’t stopped thinking about it.”

Once destined for S5000 before COVID-19 intervened in 2020, Buchan is only in his second year of tin top racing but dreams of one day testing himself on the international stage.

“I would love to go over and race European TCR, WTCR, do a round, do a season, whatever it may be, purely from a fact that I want to see where I stack up against the guys who are classed as the best,” he said.

“I don’t think that Australia gets enough credit for how much talent there is here, and I’d like to go over there and see where I stack up, because if I can win out here, I’m certain I could do well there. The competition here is ridiculous, I can tell you that much for free.”

All three races this weekend will be streamed live and ad-free via Stan Sport, which is providing exclusive coverage from 11:00-17:00 AEDT on Saturday and Sunday.