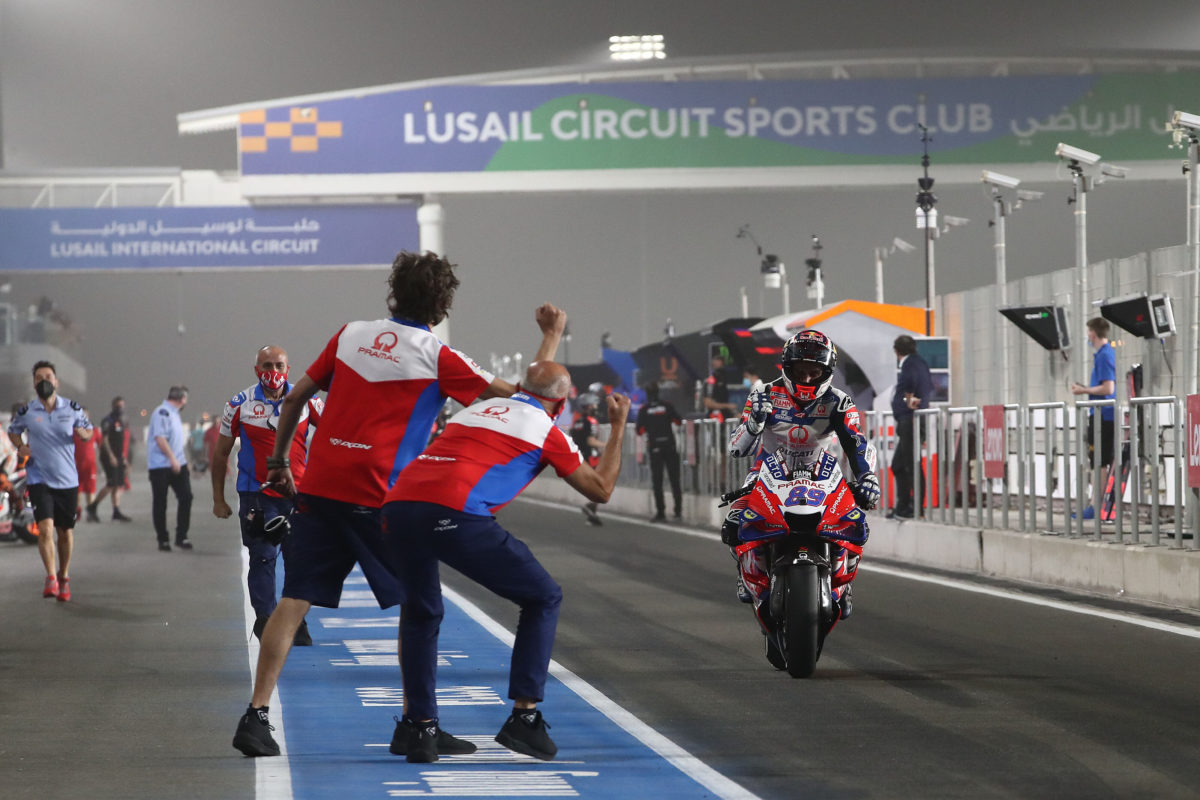 Jorge Martin has identified taking over the factory Ducati MotoGP seat currently occupied by Jack Miller as his “main goal”.

Martin has just started his second season in the premier class, again with Pramac Racing, but is already a race winner on the big bikes after triumphing in last year’s Michelin Grand Prix of Styria.

Then, he was identified by Ducati Corse general manager Gigi Dall’Igna as a likely future works squad rider, and he has continued to impress at what is effectively its B team.

The 24-year-old is already contracted directly to the manufacturer, as is normal practice for Pramac, but his deal runs out at the end of the 2022 campaign, as does Miller’s.

Also in the mix is Gresini Racing’s Enea Bastianini, who strengthened his position by winning the Qatar Grand Prix, and thus taking the early championship lead, earlier this month on a year-old Desmosedici.

Martin was taken out of that race by the man who already has a deal to ride for the Ducati Lenovo Team in 2023, Francesco Bagnaia, but is confident about his prospects of joining the Italian there next year.

“My main goal is to be an official Ducati rider,” he told the MotoGP media rights holder in his native Spain, DAZN.

“That will be determined by the results. If we are at the front, we will be where we have to be.”

While the win at the Red Bull Ring last year was Pramac’s first in the premier class, the squad has the latest, GP22-spec bikes for both of its riders, the other being Johann Zarco.

The difference between the factory team and Pramac essentially boils down to the former getting priority with respect to engineering support during a race weekend, and Martin is not ruling out a title bid this year.

“I can be MotoGP World Champion; I don’t know if it will be this year, next year or the year after,” he said.

“I was a bit of a dark horse in the [pre-season] tests because I didn’t intend to do a great lap and then we had a lot of problems.

“I’m not considered a [championship] contender, but I have the potential to do it.”

As to the GP22 package, that remains something of a question mark. Ducati made headlines before riders were on-track at the Lusail International Circuit for the first practice session of the year when it emerged that the factory team had reverted to a ‘hybrid’ of its 2021 and 2022 engines.

Martin qualified on pole using the fully 2022-specification engine, but made a poor start and was eighth when he was taken down by Bagnaia on Lap 12.

Miller’s race was already over by then after his bike got “lost” and was delivering erratic bursts of power, with the best of the new Ducati riders at the chequered flag being Zarco in eighth, and Mooney VR46’s Luca Marini the only other GP22 pilot to make it home, in 13th.

Bagnaia fumed post-race that he is “not a tester” after struggling all weekend, and while it seems every other manufacturer besides Yamaha has made improvements in the off-season, Martin believes no bike is a particular standout right now.

“I don’t think the Ducati’s the best bike on the grid,” said the Spaniard.

“I think it’s a very complete bike, it’s a factory that has a lot of good riders, young, fast learners, and with a high level.

“I don’t think there is any bike right now that is better than another, and I think this year the others have come very close.

“But I think the team, whether it’s the engineers or the mechanics that we have at Pramac and Ducati, are incredible and they put a lot of passion into it, that’s why we have a bike that has improved so much in the last few years.

“But I think there are other bikes that win, the one that has won the world championship has been a Yamaha and I think the best one is the Yamaha.

“We have to keep working and until we win the world championship, we will not be the best bike.”

Bastianini, meanwhile, believes the likes of Miller and Martin are under more pressure given they have the latest bikes.

“In my team I haven’t a lot of pressure now because I’m not in the factory team,” he said when asked by Speedcafe.com what the Qatar win meant for his own factory team ambitions.

“I think for the moment though, the other riders, especially with the 2022 bike, have more pressure than me.

“But, it is not one of my problems, the pressure.”

Round 2 of the season, the Indonesian Grand Prix, gets underway with opening practice tomorrow at the Mandalika International Street Circuit.