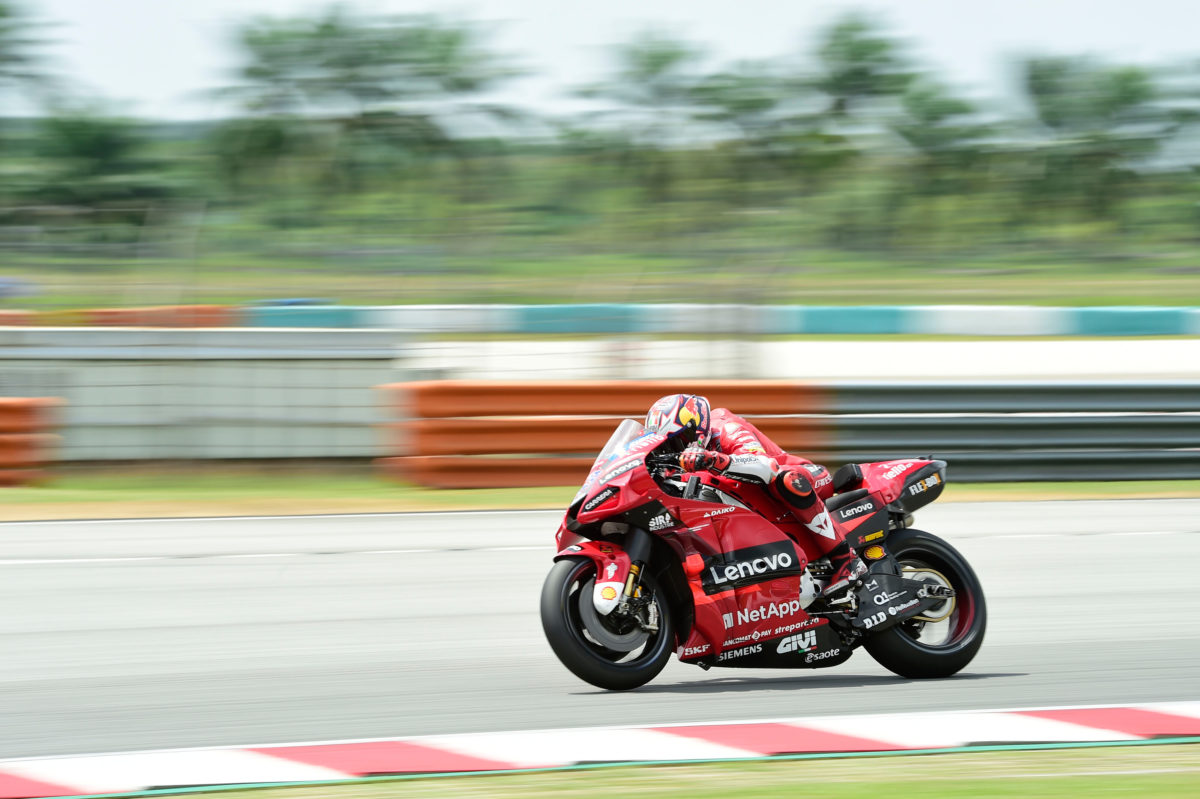 Jack Miller in pre-season testing on a Ducati

Ducati sporting director Paolo Ciabatti is hopeful that its new front ride height device is not banned from MotoGP next year.

The Bologna manufacturer raised eyebrows during the 2022 pre-season when it came to light that it had developed a system by which the front of the bike can be lowered around a lap.

Ducati had already pioneered the use of a rear holeshot device in the category, enabling the rider to lower the back end of their bike in order to enhance traction at the start of a race.

That was developed into a system which could be activated in-race, by mechanical function rather than what would be illegal electronic means, to achieve the same objectives on other straights.

It became known as the ‘rear ride height device’ and was finally copied by all other manufacturers by the second half of the 2021 season, at which time Joan Mir credited it as “really important” in the podium he achieved while using it for the first time on his Suzuki.

Now, Ducati has managed to come up with a version for the front wheel, and rival manufacturers are already seeking to have it banned.

The matter will ultimately be decided by the Grand Prix Commission, with Italy’s Corsedimoto reporting that the Motorcycle Sports Manufacturers Association (MSMA) wants it outlawed by no later than 2024.

The MSMA, comprised of the six manufacturers which compete in MotoGP, is represented on said commission, but so too is championship owner Dorna Sports, the FIM governing body, and the independent (non-factory) teams through the International Road-Racing Teams Association (commonly referred to as IRTA).

Ciabatti thus holds out hope that the front ride height device will not be banned.

“I hope common sense and a kind of fair play that I don’t see in our world from a technical point of view will return,” he told Italy’s GPOne.com.

“If something is allowed by the regulation, and there are no safety reasons to think about abolishing it, it should be allowed.

“The position of the manufacturers is clear; five would like to ban it starting from 2023 and one – that is us – would like to keep it.

“We will have to wait for what the GP Commission will decide, which normally tries to maintain a certain fairness.

“The championship is owned by the FIM and managed by Dorna; these are the bodies most interested in ensuring that it is as correct as possible both from a technical and a sporting point of view.”

Riders are divided about the device.

Ducati’s Francesco Bagnaia, naturally, expressed his support ahead of the Qatar Grand Prix, but so too did Aprilia’s Maverick Viñales, and KTM’s Brad Binder was at least resigned to its existence.

Bagnaia said, “For me I just have to press a button. It’s not a problem.”

Viñales remarked, “Not much to say, but on the acceleration it’s much safer with the holeshot.”

“Sure, when you arrive at the grid you have more to do, it’s always important for me not to mess that part up.

“But the reality is that it’s here to stay and I think every manufacturer needs to make the best of it.”

Marquez insists that the front ride height device should also be prohibited.

“For me it’s something that for the future they must remove,” he declared.

“I already said last year when I arrived after my injury.

“For the show [entertainment], we don’t gain anything. Okay it’s prototypes, but for street bikes you don’t need the holeshot.

“The aerodynamics, I agree with, because it’s nice and new things, but the holeshot system… always the run-off areas are trying to be increased, you are arriving faster on the brake points and braking later, so for the future there is no sense.”

Yamaha’s Fabio Quartararo and Mir essentially agreed, with the latter making the same point as Marquez regarding top speeds.

Quartararo said, “For me, it’s starting to be too much.

“For me in 2019, the starting procedure was just you arrive in neutral, press the launch control and go.

“Now you need to check too many things. At the end you win [enhanced performance], but for me it’s starting to be too much.”

Mir added, “I’m with Fabio. For me it’s starting to be too much.

“Every time we arrive faster into the straight; we will reach 370km/h soon. The layouts are the same and for sure it’s more performance.

“Also, on the acceleration side it’s more difficult to make a difference. If you use everything then it’s more performance but it’s not the best thing for safety.”

The season continues with Round 2, the Indonesian Grand Prix, this weekend at the Mandalika International Street Circuit.