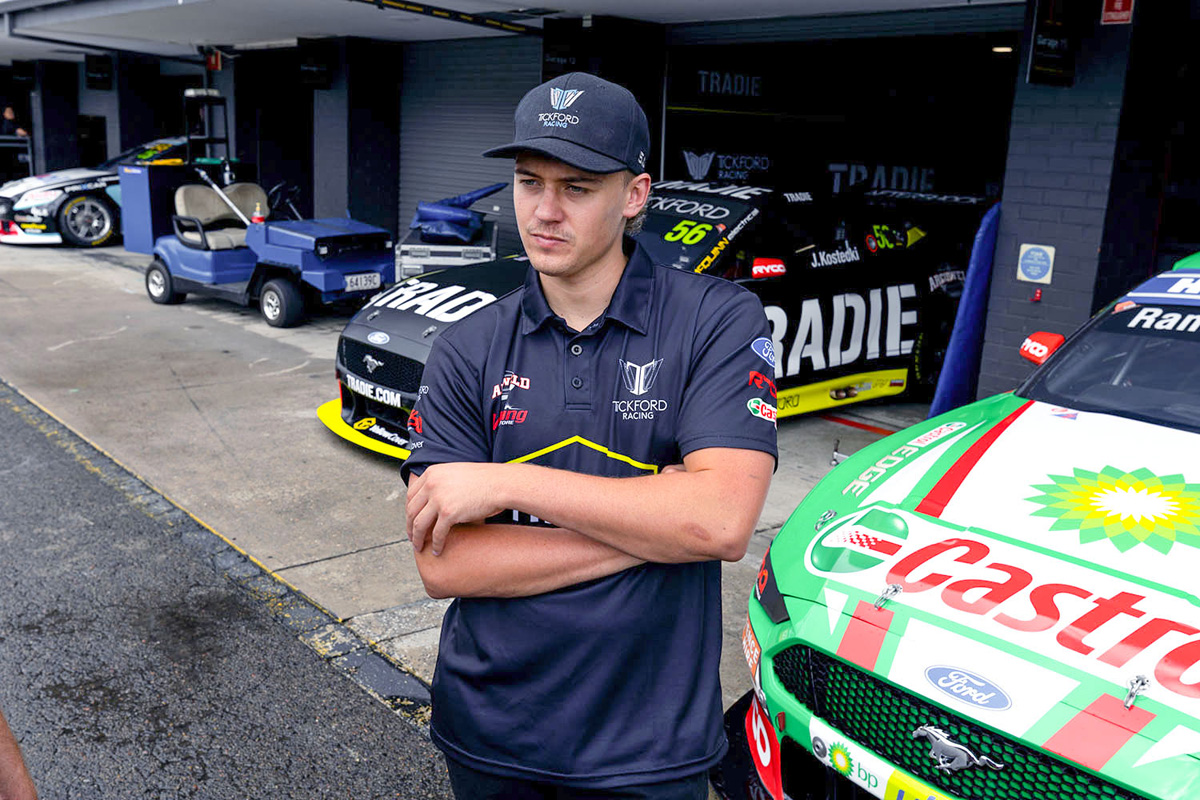 Having got a glimpse of the performance able to be extracted from a Tickford Racing Mustang, Jake Kostecki is excited for what’s possible when he puts it all together.

The former Matt Stone Racing driver had a brutal first main game weekend in a Ford, leaving Sydney Motorsport Park with finishes of 19th and 24th.

Having started last for the Saturday race, he outqualified team-mate Thomas Randle less than 24 hours later – only for things to go awry when Kostecki was pinged for turning Todd Hazelwood around, and then himself spun in greasy conditions at the final corner.

With his car stalled and pointing the wrong way, a Safety Car period was called to retrieve the stricken #56 Tradie Mustang.

While Round 1 on the surface might have appeared fairly negative, the 22-year-old sees positives to take into the Ned Whisky Tasmania SuperSprint later this month.

“It wasn’t a smooth sailing first round with a few little things going wrong, but we’ll learn from that now and be better for the next round,” Kostecki, who was in Launceston today, told Speedcafe.com.

“There were still positives to take out of the round, like our race pace in both races was fairly strong, we just didn’t piece everything together with little things happening in the background and then my mistake on the Sunday as well.

“But if you take our positives from the round, I definitely showed a lot of good speed in the races which I felt like was a strong thing that I haven’t had for a while.

“So I am definitely looking forward to what’s to come for the future because I can feel from the package that it can be great.

“I’m pretty confident that the team can make the right decisions to get the cars up the front,” he added.

“Like Cam [Waters] has obviously been a front-runner for the last few years now so there’s no reason why we can’t get my Tradie Mustang up the front too.”

Last year, Waters showed just how speedy Tickford can be over a single lap at Symmons Plains, taking a hat-trick of front-row starts including two poles.

Excessive tyre wear in race trim though would prevent him from converting any of those opportunities into a podium finish.

Kostecki believes the team now will be better placed to cash in on such raw speed.

“The car has great one-lap speed there and they have definitely learnt over the last 12 months of other things as well to keep the car up the front for the races too, which I’m pretty excited about,” he said.

With arguably Tickford Racing’s worst track now out of the way, its four drivers – Waters, James Courtney, Randle, and Kostecki – are sixth, 12th, 17th, and 21st in the championship, respectively.