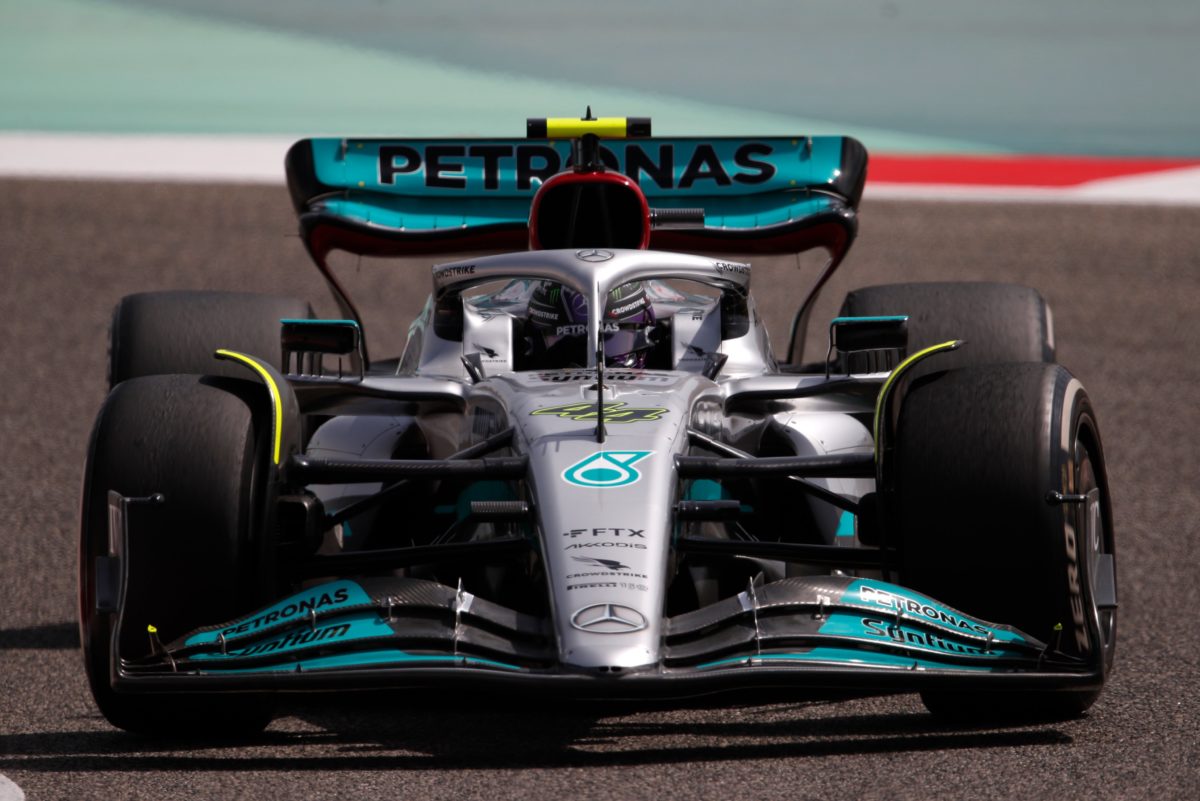 It sparked intense discussion within the paddock, with Red Bull boss Christian Horner suggesting the solution was not in the spirit of the rules.

Speaking with F1TV during the morning session, Brawn acknowledged that Mercedes’ design was an extreme solution.

“The Mercedes concept we didn’t anticipate, but I think it is a very extreme interpretation of the regulation,” Brawn said.

“There’s going to be a lot of debate about their interpretation. That’s what happens with new regulations.

“And however hard you try to close up all the options – believe me, we closed off hundreds of them – the innovation in F1 is always extreme.

“So from our perspective, it’s largely about ‘does it affect the objective of the regulation’,” he added.

“But from the teams’ perspective, they want to be sure that no one’s taken an interpretation they don’t feel is correct, so I think there’s going be a lot of debate in the next few days.”

Significant effort went into formulating the all-new aerodynamic regulations which have been introduced for the coming season.

Primary among the considerations was increasing the ability for cars to follow one another.

The solution settled upon is a combination of ground effect, where cars develop their grip by channelling air under the floor, and by diverting turbulent air up rather than around the cars.

There is a feeling among the F1 paddock that Mercedes’ sidepod design is contrary to that latter point, hence Horner’s comments.

“The new Mercedes violates the spirit of the regulations. For us, there are some parts that are not legal,” Horner is reported as saying according to Auto Motor und Sport.

Interestingly, Red Bull felt the need to distance itself from the remark’s and in response issued a statement claiming: “Christian Horner has not given any interviews regarding Mercedes’ car. Any quotes being attributed to him are incorrect.”

It subsequently clarified that by that it meant official comments, as it received a backlash on social media.

Speaking with Sky Sports later, Horner admitted he was surprised to have read comments he’s alleged to have made.

“I was slightly surprised to be reading comments that I’m supposed to have been making but there we go,” he said.

“To be honest with you, I haven’t paid a great deal of attention to it,” he added when asked for his thoughts on the Mercedes sidepods.

“It’s obviously a fairly different concept but that’s for the aero guys and designers to get into.”

The concern therefore appears to stem not from the legality of the design, but whether it meets the spirit of the regulations.

“Well, the spirit [of the regulations] is a grey area,” Brawn said.

“I think one of the significant things that we changed was the governance in Formula 1.

“In the past, you needed everybody to agree to a change in the season. To make a chance, we have 80 percent of the teams agree, as long as the FIA and Formula 1 also agree.

“So I think once the interpretation that Mercedes has made has been understood, then we can get a balanced view where you can take a view on its impact, what effect it’s going to have.

“The spirit is such a grey area but at the end of the day, you have to go with what the wording of the regulation is. If you take it to court, that’s what they judge it on.

“But that wording can be changed. With an 80 percent team majority we can change the wording.”

Testing continues in Bahrain on Friday, the penultimate day of F1 testing before the opening round of the season on March 18-20.