Bagnaia declares he is ‘not a tester’ after Qatar MotoGP shocker

Bagnaia declares he is ‘not a tester’ after Qatar MotoGP shocker 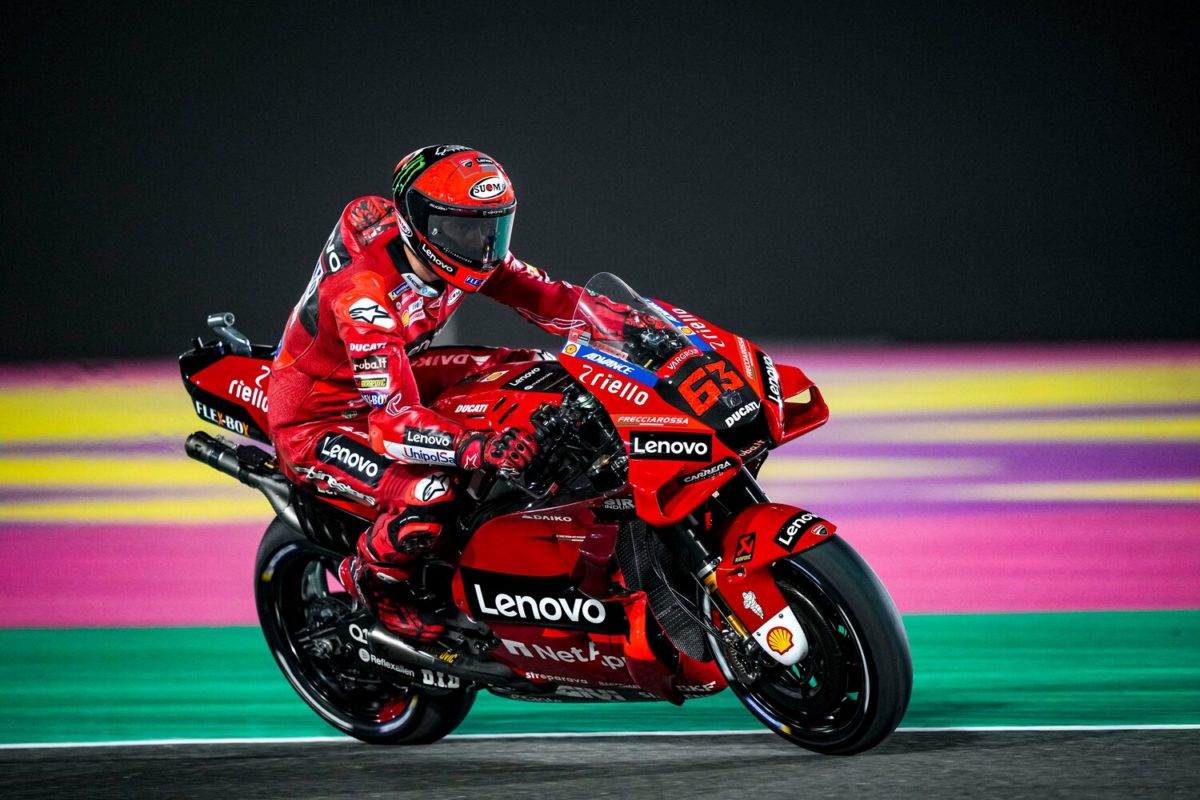 Ducati’s Francesco Bagnaia has declared that he is “not a tester” after a shocking performance in Round 1 of the MotoGP season, the Qatar Grand Prix.

Bagnaia was arguably the favourite for the title before the season-opener, after coming home with a wet sail last year when he finished runner-up to Fabio Quartararo.

However, his quest to go one better in 2022 began in terrible fashion at the Lusail International Circuit.

The Italian crashed in attempting to pass Ducati stablemate Jorge Martin halfway through the 22-lap race, taking the Pramac Racing rider down with him, but was already in trouble by then.

He had qualified a relatively lacklustre ninth on the grid, plummeted to 16th during the opening lap, and was five seconds away from the lead when he tried to pass Martin for eighth position.

In comments consistent with those he made after a front-end lose in Friday practice, Bagnaia said he was testing during a race weekend when he should have been concentrating on setting his Desmosedici up for a grand prix.

“It’s strange, because all the new Ducatis started so badly,” said #63.

“I was 16th in Turn 3, then I started to push to recover positions, but we were not ready at all to fight for the win today.

“It was too ambitious to think about victory, but we have tried to recover positions.

“My pace was not so bad, it was quite good, thinking about what we have done this weekend. The most important thing will be to start from this, and not touch anything on the bike any more.

“From the first day of the test, I never rode with the same bike for two sessions in a row.

“So, my feeling was a mix of feelings, because I was discovering things again during the race.

“So, this is something unacceptable for me, so I have to be more focused on my riding style, to adapt better.

“And to work for the track, because from the first day of testing until FP3, we never worked to adapt my riding style to the track or the bike.

“So, this means you will never arrive ready to the race, and this was the situation.”

He added, “In the past, it was not like this. You have a satellite team that work more on these things.

“But OK, in any case I’m not a tester, I’m here to win, and I [need] to be concentrated on riding in the best way possible.

“We only had five days of [pre-season] testing [but] I think we have to test just in the test; not during a race weekend.

“[Otherwise] it will be more difficult to reach a result like last year.”

Bagnaia says he has asked Ducati Corse general manager Gigi Dall’Igna to work more like last year, when he won four of the last six races.

Somewhat ironically, the GP21 model of Desmosedici he rode then is what Gresini Racing’s Enea Bastianini took to victory at Lusail in Round 1 of 2022.

“It’s clear that the bike that last year was winning all the last races won today, because it was already very competitive last year,” remarked the factory team rider.

“So Enea, from his first day of test, they only had to put fuel in the bike and ride it.

“And we were concentrating too much on developing. And from my point of view, we will never touch the bike again, and just ride.” 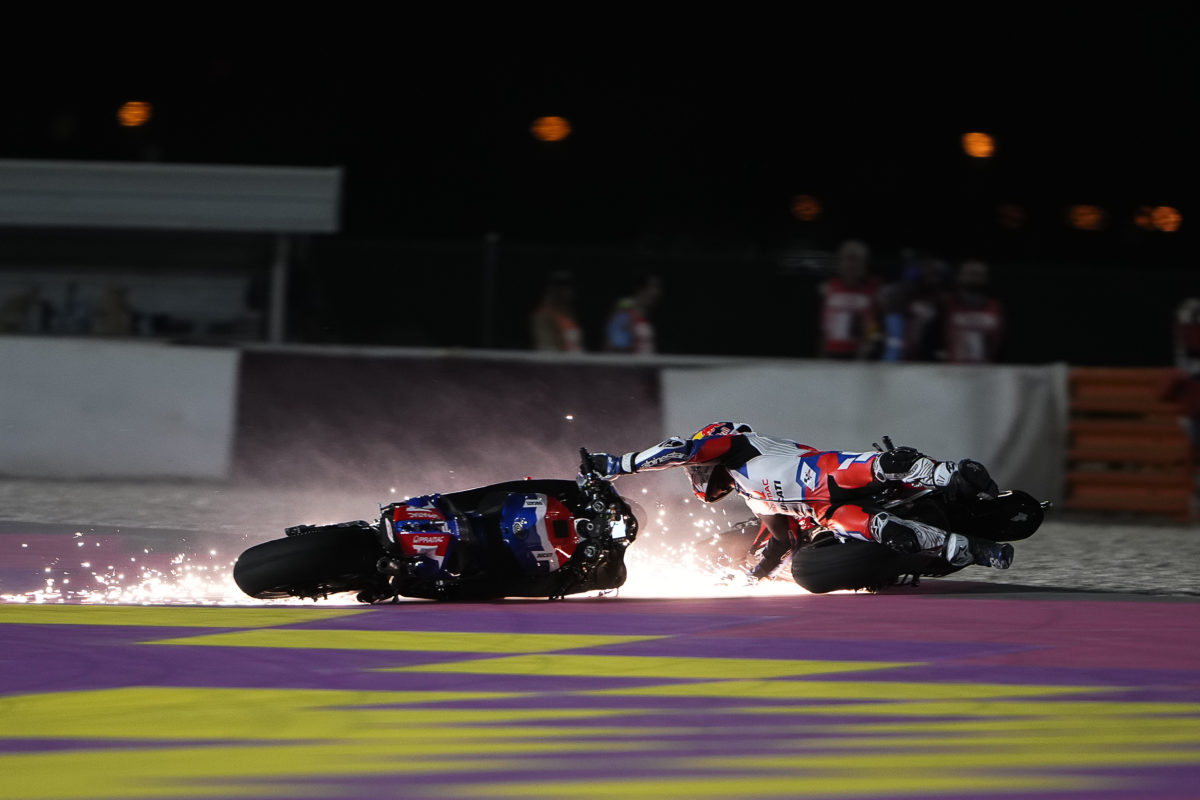 Jorge Martin’s tumble after being taken out by Bagnaia

Bagnaia was also apologetic for taking out Martin, even if the front-end lock-up which he experienced felt “strange”.

“I was a bit late on entry with Jorge, but it was not a really hard braking,” he recounted.

“So, it was quite strange to have the front locking, but it’s like this.

“I have just to say sorry to Ducati, to Pramac, and to Jorge, first of all, and just focus on the next race.”

For the part of Martin, who was due to have checks on a sore right hand from the crash, he too was frustrated about a lack of pace on his own GP22.

The second-year rider was also concerned about Ducati having apparently lost its horsepower advantage.

“The crash sometimes happens, so just I am angry because we weren’t competitive today,” said Martin, who had qualified on pole but dropped to seventh at the start.

“I was expecting to fight for the podium, or even the victory today but the pace wasn’t there. We had some issues and we need to understand.

“I could not overtake even the Aprilias or the Suzukis, so I don’t know exactly which is our strong point now.

“We don’t have a strong point, so we need to understand well and try to improve because today I could finish seventh, eighth. That was the maximum.”

Jack Miller also failed to make the finish on the other Ducati Lenovo Team entry, having developed a technical problem which affected the throttle.

Power delivery had also been a talking point at the start of the weekend after it came to light that the factory team riders had reverted to a hybrid of the 2021 and 2022 engines, while the other GP22 riders remained with the full 2022 specification.

Only two of those five GP22 riders reached the chequered flag, Pramac’s Johann Zarco being the best of them in eighth position.

Round 2 is the Indonesian Grand Prix at Mandalika on March 18-20.