Gardner ‘hoping to catch up’ with Darryn Binder after Qatar ‘disaster’

Gardner ‘hoping to catch up’ with Darryn Binder after Qatar ‘disaster’ 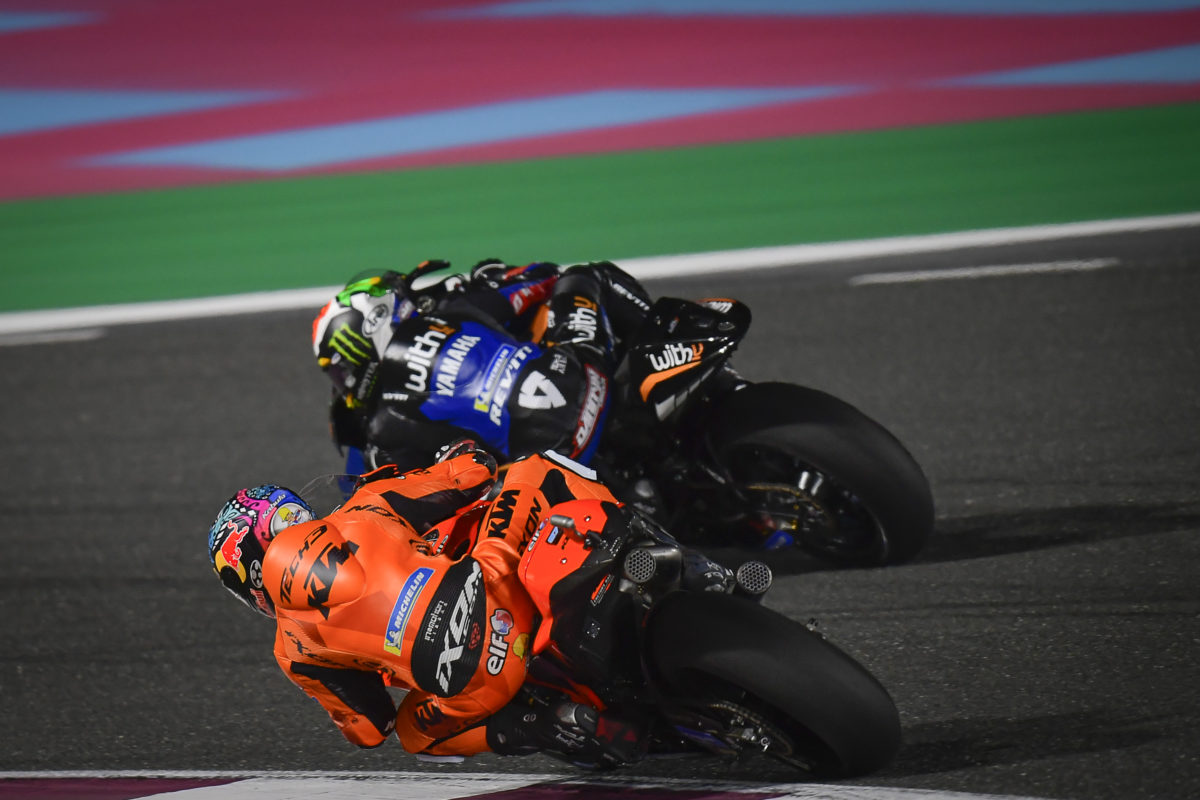 Remy Gardner is “hoping to catch up” with Darryn Binder after a battle in the Qatar MotoGP which he described as “a disaster”.

Gardner picked up the final championship point on offer in his debut premier class race by finishing 15th, and so happened to be first of the rookies.

However, the Tech3 KTM rider was not particularly satisfied with that result nor with how fellow rookie Binder, who has made the leap from Moto3 directly to MotoGP, rode during the 22-lapper at Lusail.

Timing shows he was apparently engaged in a contest with the South African for virtually the whole race, finally getting ahead for good on Lap 20.

However, Gardner had higher ambitions, suggesting he could have caught Maverick Viñales, who finished 12th, or Binder’s WithU RNF Yamaha team-mate Andrea Dovizioso, who ended up 14th.

“Although it is not where we want to be, it is nice to be getting a MotoGP point,” said the Sydney-born rider.

“At one point, I felt capable of catching Maverick Viñales and Andrea Dovizioso, but I had Darryn Binder in front of me and I could not get past him.

“He is coming from the Moto3 class, so he was all over the place, coming back on line without looking, he was wide.

“It was a disaster and I lost the group. I am hoping to catch up with him to discuss this.”

Binder, who finished a position behind Gardner, commented post-race, “I got off to quite an okay start, I was pretty fast in the beginning, so I was making some passes and I was pushing too much for a couple of laps.

“By Lap 5, I needed to take a step back and find my feet because I had a long race ahead of me.

“I had a nice battle with Remy, I really enjoyed fighting with the rookies, I learned so much throughout the race and by the end, I really wanted to fight for 15th, for the point, but I just missed out.”

Gardner was one of two points finishers for the Austrian marque, with Red Bull KTM Factory Racing’s Brad Binder, brother of Darryn, finishing second in the first race of the season.

That too, says #87, shows there is room for improvement.

“Brad Binder did a podium today, so we need to look at his data and what he did in order to help us improve and go faster,” added Gardner.

“It is a great result.

“Anyway, we finished the race today and we will take experience from it when heading to Mandalika.”

The bottom four finishers were in fact all rookies, Raul Fernandez last of them in 18th on the other Tech3 KTM, while Marco Bezzecchi (VR46 Ducati) failed to make the end of his debut premier class race.

“I am pretty happy about Tech3 KTM Factory Racing’s day and we have accomplished our mission,” he declared.

“This year is all about learning the category and the target is to fight for the Rookie of the Year title.

“We saw a tough battle between all rookies and we are happy to see Remy Gardner emerging as the winner of today’s contest.

“We picked up a point, which is not easy to do, especially with his right wrist still sore, and we finished the opening round leading the rookies’ championship. Congratulations Remy on your first MotoGP point.

“Raul had a good race and a great battle with all the rookies as they stayed close to each other the entire race, despite the track conditions changing at every single lap.

“Even if he did not grab the point, I want to thank him for his dedication and his hard work.

“We know that Raul is a fast rider and we understand that it can be difficult to accept that the learning process takes a while. I am sure that from the next race, he will already be better than today.”

With the next stop being the new Mandalika International Street Circuit, the rookies will not only arrive at a venue where they already have MotoGP testing mileage under their belt, but one where the established riders have no more track knowledge than they do.

The Indonesian Grand Prix will be held on March 18-20.