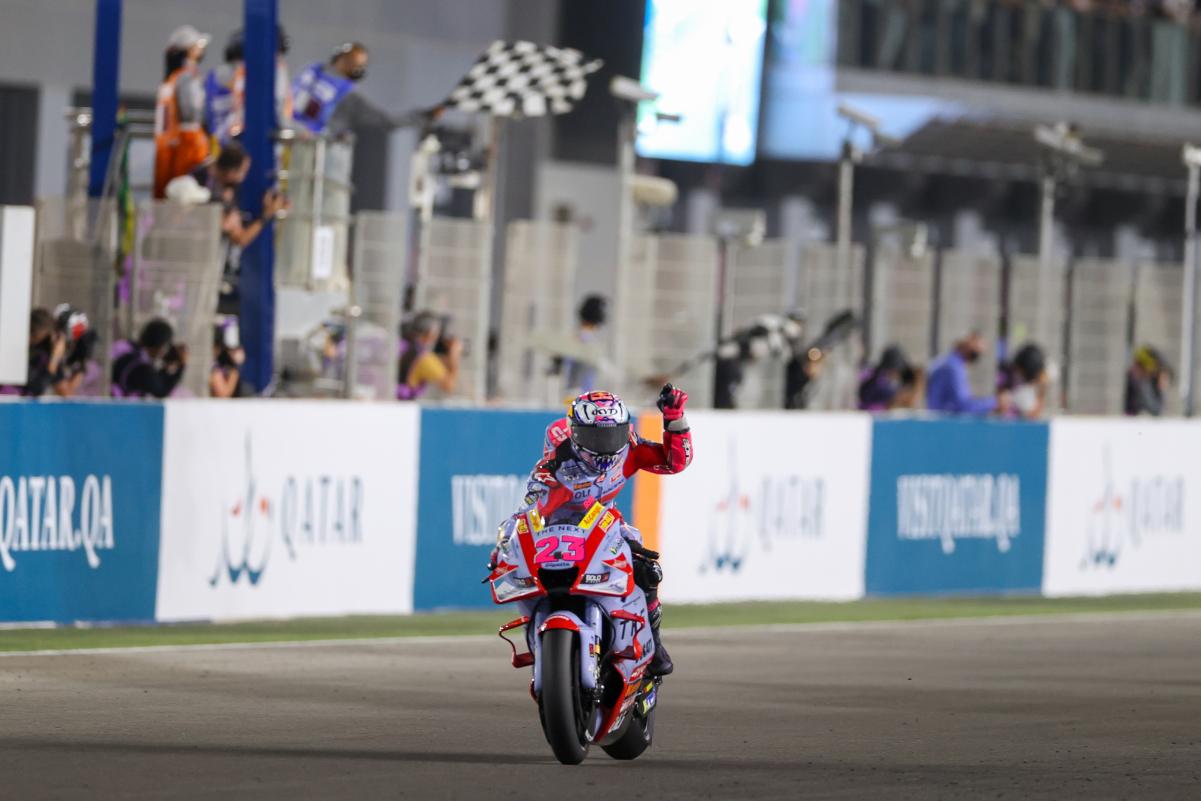 Gresini Racing’s Enea Bastianini has won the Qatar Grand Prix as factory Ducati counterparts Jack Miller and Francesco Bagnaia both failed to finish the first race of the MotoGP season.

Marc Marquez was fifth on the second factory Honda and 2021 champion Fabio Quartararo finished ninth on his factory Yamaha, while Tech3 KTM’s Remy Gardner picked up a championship point when the Sydney native ended up 15th, the first of the rookies.

However, Miller retired with a technical drama and Bagnaia succeeded only in taking out fellow Ducati rider Jorge Martin (Pramac Racing) while they were running towards the back of the top 10.

The start was already a shocker for most of those on the GP22 Ducatis, with Martin dropping from pole position to seventh, Miller (Ducati Lenovo Team) from fourth on the grid to 10th at the end of the standing lap, and Bagnaia as far back as 15th.

For Honda it was the opposite, Espargaro jumping from sixth to first and Marquez slotting into second, while Binder climbed from seventh to third.

Suzuki Ecstar’s Joan Mir made two passes on Lap 1 to be running in fourth early on, ahead of Bastianini, and Aleix Espargaro (Aprilia Racing), while Martin even briefly dropped behind Quartararo (Monster Energy Yamaha) before reclaiming seventh.

Marquez went down the inside of Pol Espargaro at Turn 1 on Lap 2 but could not make the move stick, before Rins (Suzuki Ecstar) passed Quartararo for eighth at the start of Lap 4.

The field had settled into something of a rhythm by then, with Pol Espargaro heading up a train which stretched deep into the top 10 but #44 looking comfortable in the lead.

Bagnaia had climbed to 10th by then, but Miller was going in the opposite direction, losing positions at a steady rate.

Binder grabbed second spot when Marquez ran wide at Turn 1 on Lap 6, and Bastianini passed Mir for fourth position at Turn 4 on that same lap.

From there, the top four started to break away, and Bastianini advanced to third position when he rode past Marquez at the start of Lap 7.

Pol Espargaro had stretched his lead to a full second when Bastianini finally converted pressure into a pass of second placed Binder as they ran towards Turn 1 at the start of Lap 14.

Meanwhile, Aleix Espargaro had risen to fifth, after re-passing Mir on Lap 8, and was stalking the #93 Honda which was losing touch with the podium positions.

The Aprilia rider squeezed past Marquez on Lap 17 at Turn 15, as Bastianini reeled in the other factory Honda entry at the head of the field.

The Gresini rider got a run on Pol Espargaro at the end of Lap 18 and blazed past as they ran down the straight, before #44 outbraked himself at Turn 1 and ceded second spot also, to Binder.

Bastianini was more than a full second up at the end of Lap 20 and while Binder closed in at a fairly rapid rate in the final two laps, the Italian had enough in reserve to win by 0.346s.

It made for emotional scenes, the victory being the team’s first since founder Fausto Gresini died with COVID-19 ahead of the 2021 season.

Pol Espargaro was almost another second further back in the final podium position, ahead of Aleix Espargaro, Marquez, and Mir.

While a Ducati won, it was an embarrassing night for the Bologna marque’s factory team.

Bagnaia crashed out on Lap 12 and took Martin with him, in what was an attempted pass at Turn 1 for only for eighth position.

By then, Miller had already pitted at the end of Lap 7 with what had been reported as a possible electronics issue for the #43 entry, the Queenslander having dropped to last of those who were still upright at the time.

In addition to Martin and Bagnaia, those crashing out were Miguel Oliveira (Red Bull KTM), Alex Marquez (Castrol LCR Honda), and Marco Bezzecchi (Mooney VR46 Ducati), making for six DNFs once Miller is accounted for.

In the championship, Bastianini has 25 points, Binder 20, and Pol Espargaro 16.

Round 2 is the Indonesian Grand Prix, at the Mandalika street circuit, on March 18-20.