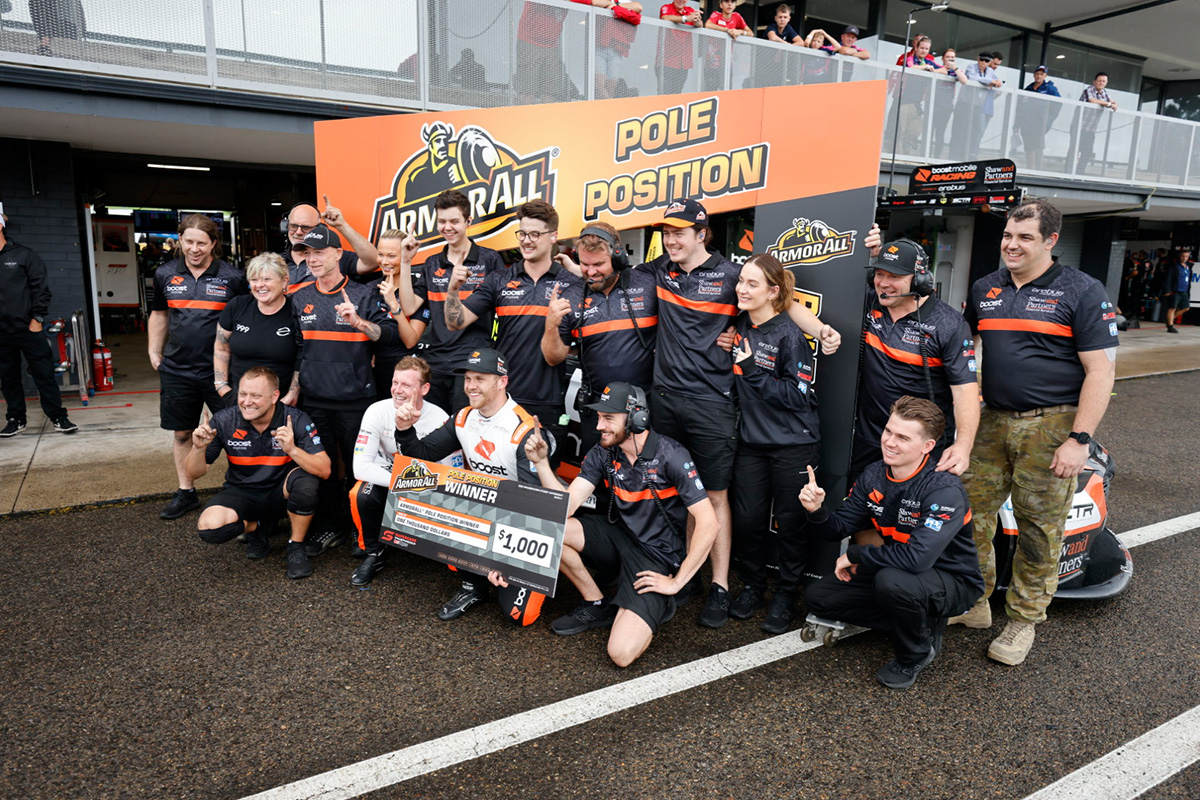 Kostecki went from third at the end of provisional qualifying to first on the grid for this afternoon’s 77-lap contest at the Beaurepaires Sydney SuperNight, with the Shell V-Power Racing Team’s Anton De Pasquale to join him on the front row.

Rain was variable throughout the session and Walkinshaw Andretti United’s Chaz Mostert was the big loser, dropping from provisional pole to seventh in the #25 Mobil 1 Optus ZB Commodore.

Kostecki had gone deep into Moffat Corner (Turn 1) in the #99 Boost Mobile ZB Commodore and was rewarded at the end of the lap with a 1:39.5216s which was three tenths of a second better than anyone to that point.

De Pasquale was next onto the race track, just as the rain got noticeably heavier, but was still fastest to the first sector before nearly chucking the #11 Mustang off the road at Turn 7.

However, he still managed to achieve a 1:39.6288s to go second-quickest with one car to go, namely that of Mostert.

Unfortunately for the 2021 Bathurst 1000 winner, the track was too wet by then for him to convert his earlier qualifying performance into an actual pole position, as he could only set a 1:40.8010s.

On the other hand, Tickford Racing’s Cameron Waters drove the #6 Monster Energy Mustang to a 1:39.8429s to qualify third from a provisional fifth, with Broc Feeney (#88 Red Bull Ampol ZB Commodore) taking fourth on a 1:40.1088s.

James Courtney (#5 Opposite Lock Mustang) had the burden of being first onto the race track but the Tickford driver still crept up to eighth on the grid, alongside Mostert, courtesy of a 1:40.9435s.

Brad Jones Racing’s Bryce Fullwood (#14 Middy’s ZB Commodore) was fourth to head out and ultimately qualified ninth with a 1:41.3760s.

Todd Hazelwood was already likely drop from a provisional sixth when he had his lap of 1:41.8193s scrubbed off due to straying beyond track limits, and through a big puddle, at the final corner.

Illustrating how conditions deteriorated relative to provisional qualifying, Kostecki’s shootout lap was more than four seconds slower than Mostert had gone in the earlier, 15-minute hit-out which saw drivers finish on slicks.

“Just a credit to the whole team,” said Kostecki post-session.

“We weren’t very good here in the wet when we were here last year, so George [Commins, engineer] definitely tuned her up and she felt awesome throughout qualifying and to just be do the lap in the shootout with no mistakes was awesome.

“We were the fastest telco then so we’ll have to see how we go in the race.”

Race 2 of the season is scheduled to start this afternoon at 14:30 local time/AEDT.