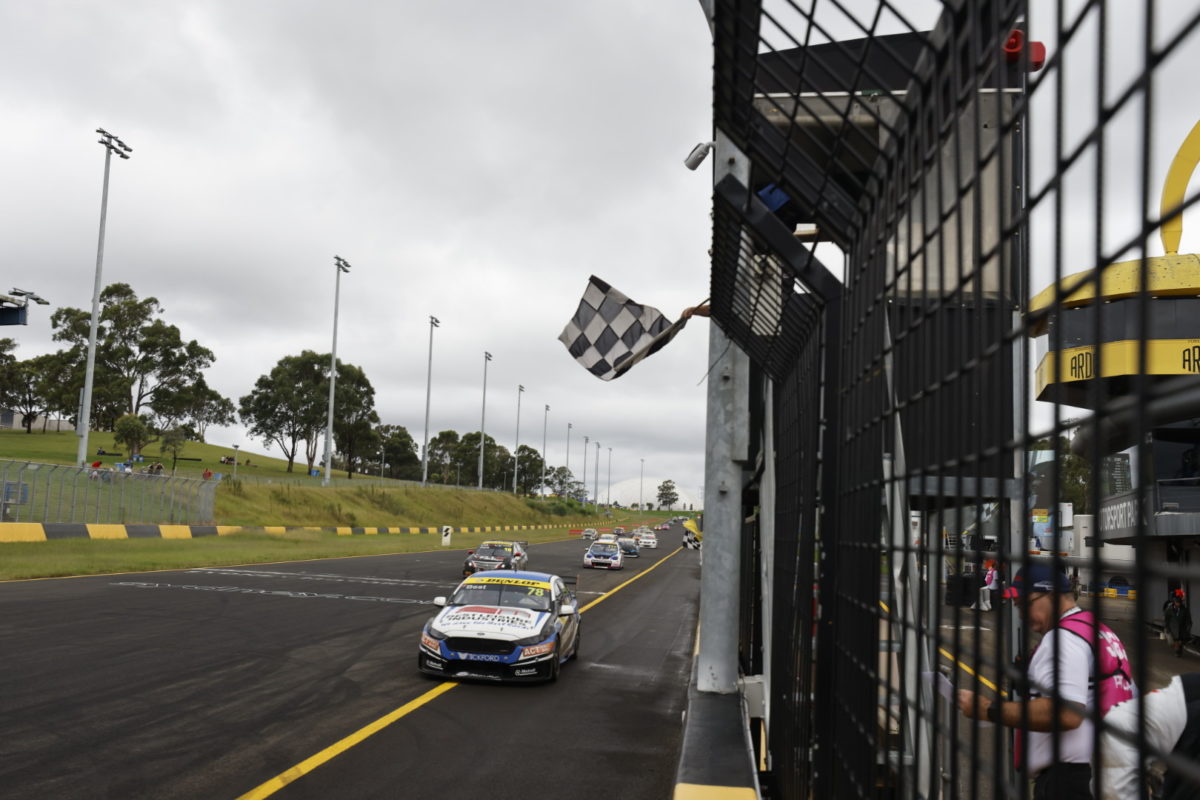 Tickford Racing’s Zak Best leads the Dunlop Super2 Series after winning a chaotic second race of Round 1 at a wet Sydney Motorsport Park.

Best led the field to the chequered flag under the third Safety Car period of the race, ahead of Grove Racing’s Matt Payne and Triple Eight Race Engineering’s Declan Fraser.

Angelo Mouzouris was among the DNFs due to damage which he incurred when he hit Cameron Hill at the first braking zone of the race, while the afternoons of Ryal Harris and Nash Morris ended in a crunch at Turn 05 just after the second restart.

There was carnage at both ends of the field as soon as the race got underway, triggering a Lap 1 Safety Car.

Hill had made a good start from Row 2 and challenged pole-sitting team-mate Fraser as they headed for Bond Bend (Turn 2), only to be punted there by Mouzouris (#6 MW Motorsport Nissan Altima). 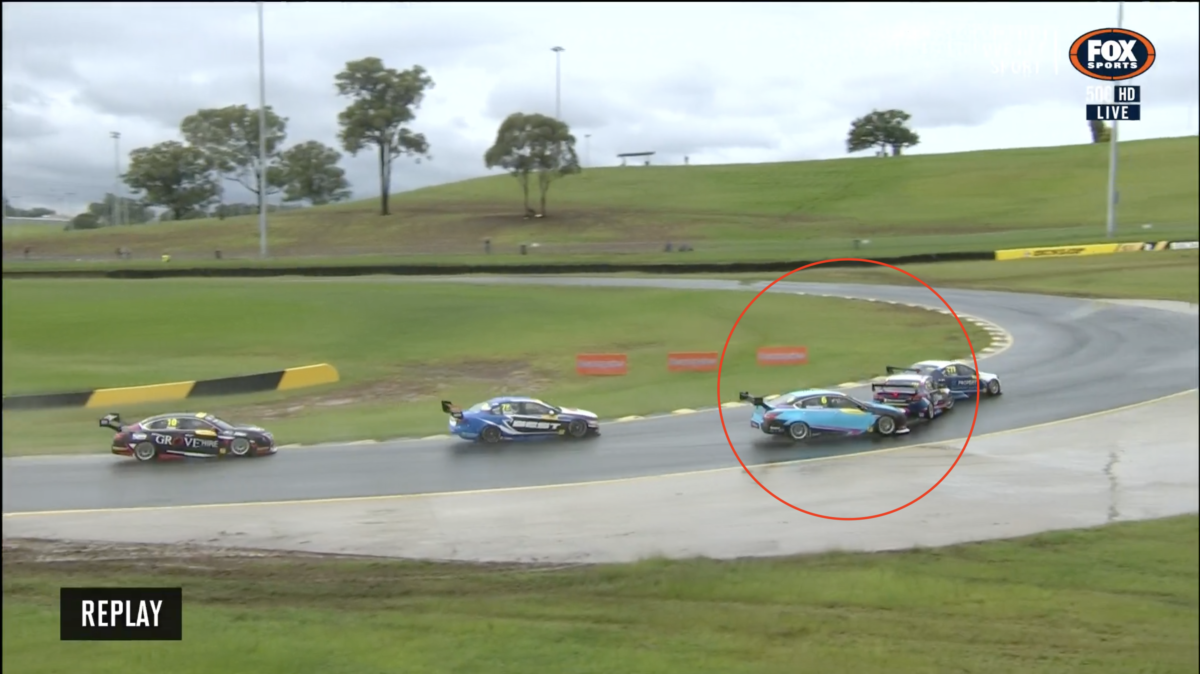 Tyler Everingham (#27 MWM Nissan Altima) and Super3 driver Kai Allen (#26 Eggleston Motorsport VE Commodore) both failed to get away initially from Rows 2 and 3 respectively, but the contact on the main straight in fact occurred up the back.

Hill and Mouzouris were both into the pits for running repairs and while the former was able to be dispatched while still on the lead lap, the latter would be forced to relent when he was into the lane a second time under Safety Car. 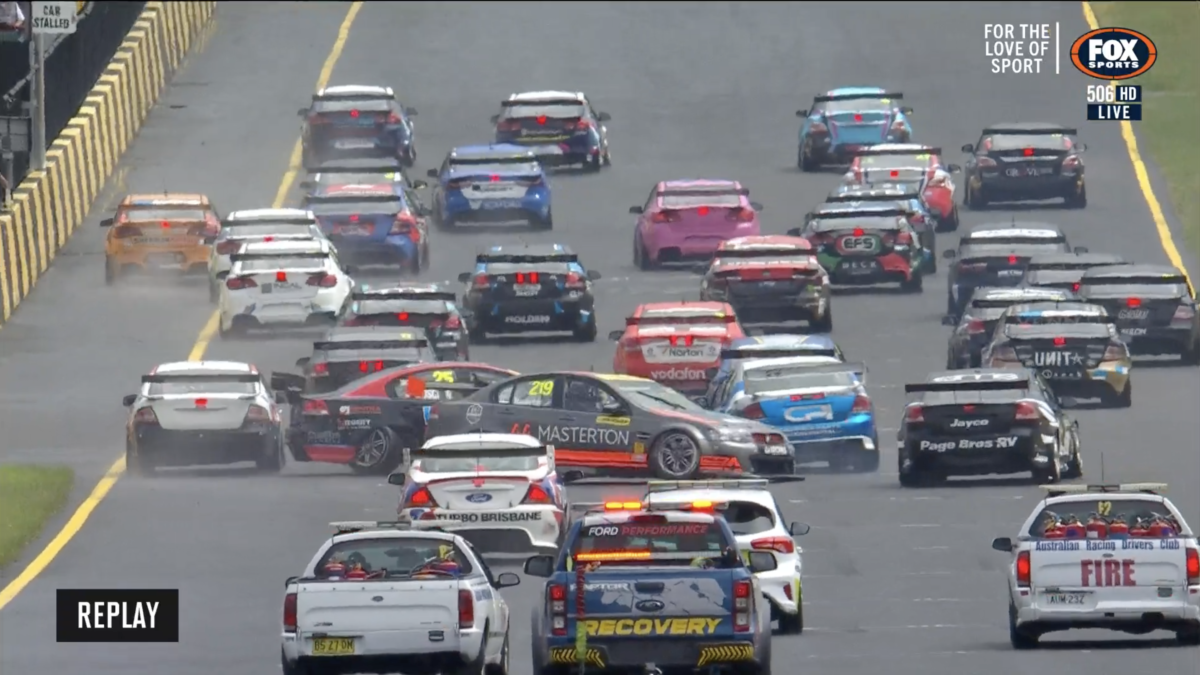 The mess on the grid. Picture: Fox Sports

The race restarted on Lap 5 and when Fraser was slow off Brock’s 05, Best was able to clear him down the outside of the track and drive into the race lead by the time they arrived at Turn 6.

Payne moved into second spot when he passed Fraser as they ran down Brabham Straight to commence Lap 6, before an almighty stoush broke out in the latter half of the top 10.

McLean was in the thick of it, eventually losing his rear bumper after copping a nudge from Everingham at the Turn 8 hairpin, although that was just one of several hits that the #54 VF Commodore took.

McLean’s Eggleston team-mate Cameron Crick ended up in the wall after a tangle with Morse at the Turn 8 hairpin on Lap 8, necessitating a second Safety Car period.

Another restart came on Lap 12, at which point Everingham went down the inside of Seton at Turn 3 and Robotham followed him through at Turn 4.

Behind them, Harris was forced wide and onto the wet grass at Turn 4, before sliding back across the track at 05 and taking out Morris.

The Safety Car was scrambled yet again and that would effectively be the end of the action, meaning Best won the race from Payne, Fraser, Maxwell, Everingham, Robotham, and Seton.

Matt Chahda Motorsport gambled on slick tyres for Matt Chahda (#18 FGX Falcon), making him the only driver in the field not on wets, and he drove from 12th to eighth in the final green flag period as the track continued to dry out.

Hanson finished ninth, McLean rounded out the top 10, Allen salvaged the Super3 win in 11th outright, his class rival Brad Vaughan (#5 Anderson Motorsport FG Falcon) took 12th, and Hill got back to 13th outright and 11th in the Super2 class.

Round 2, as the calendar currently stands, supports the Bunnings Trade Perth SuperNight at Wanneroo Raceway on April 30-May 1.