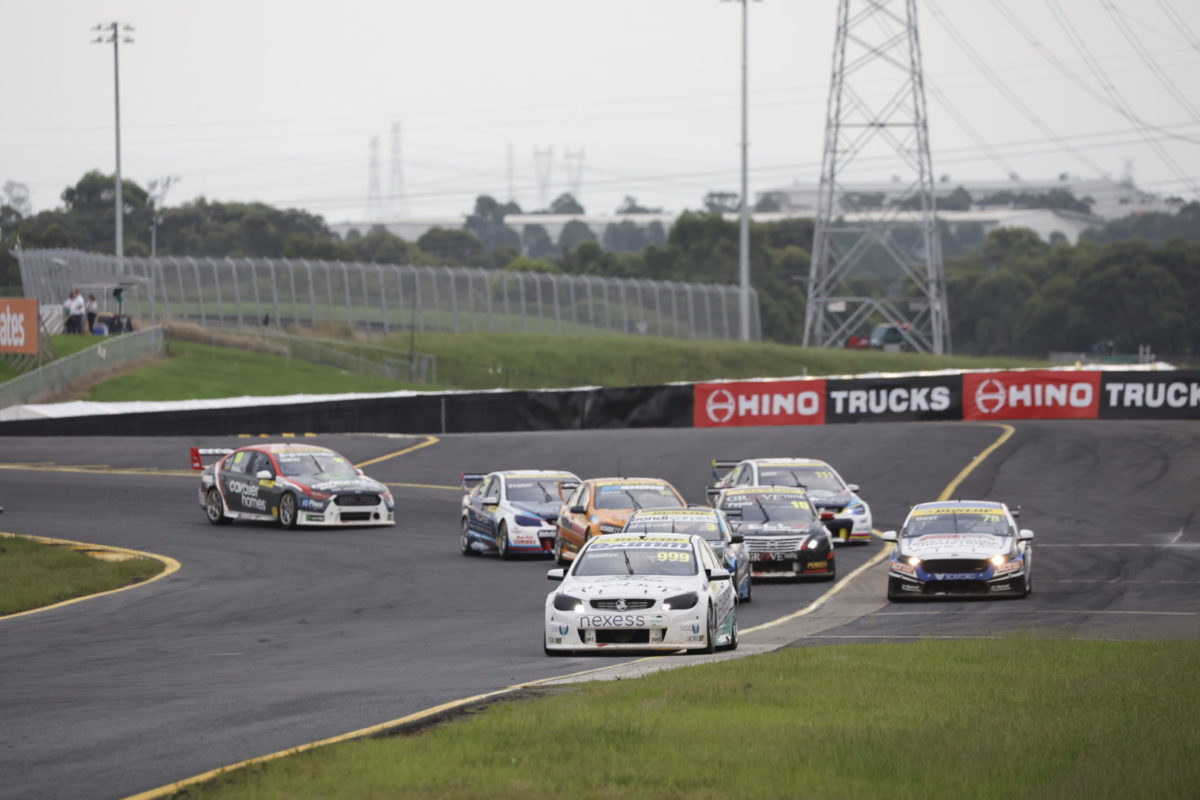 Jaylyn Robotham drives away from the field after taking the lead. Picture: Ross Gibb

Jaylyn Robotham has pinched a thrilling maiden Dunlop Super2 Series race win after Tyler Everingham was cruelled by a flat tyre in the Round 1 opener at Sydney Motorsport Park.

Image Racing’s Robotham was only fourth at the time of the second and final Safety Car restart in Race 1, at which point Everingham held the lead but had a deflating right-rear.

The MW Motorsport driver ran wide when he tipped the #27 Nissan Altima into Moffat Corner (Turn 1), incentivising Tickford Racing’s Zak Best to have a lunge when the field arrived at the braking zone at Bond Bend (Turn 2).

Best pinched a brake in the #78 FGX Falcon and he too ended up wide of the race line, causing pole-sitter Matt Payne to show the nose.

As Best tried to hold off the Grove Racing driver through Turns 3 and 4, Robotham decided to stick the #999 VF Commodore down the outside, and that turned into the race lead as they ran though Brock’s 05 onto Turn 6 on the far side of Corporate Hill.

Best locked up again at the Turn 8 hairpin as Robotham disappeared up the road, extending the gap to 1.9s at the end of the restart lap and going on to win by 3.3610s after just two laps more.

Best hung on for second while MWM debutant Thomas Maxwell (#3 Nissan Altima) was able to nick third position in the kerfuffle which unfolded on the restart lap.

Earlier in the day, Payne had taken a maiden Super2 pole position.

However, he was slow away, allowing Everingham to bolt from the outside of the front row and into a clear lead.

Best advanced to second spot from the inside of the second row, with Payne slotting into third and Robotham taking up fourth.

Chahda went down the inside of Maxwell at Turn 4 to move into fifth position, before a Safety Car was called due to an incident back at Turn 3.

Elly Morrow (#8 Brad Jones Racing VF Commodore) had become stuck on the grass after being turned around in contact with Angelo Mouzouris (#6 MWM Nissan Altima), who started last after failing to set a representative time in qualifying.

Stewards investigated the clash in-race and opted to take no further action, although the neutralisation did cost Everingham most of a margin which already stood at 1.9s.

The restart came on Lap 4 and Everingham took his time to accelerate, as is his right, but Chahda dropped back behind Maxwell and also Seton as the field fanned out.

Triple Eight team-mates Fraser and Hill were on the climb before the Safety Car was called again on Lap 6, due to Super3 competitor James Masterton (#219 Masterton Motorsports VE Commodore) spinning off at Moffat Corner and becoming stuck on the wet grass.

Again, Everingham lost a handy lead, at that point approaching a full second, while Best had managed to keep Payne behind him in the battle for second position.

It was during that Safety Car period that the issue with Car #27’s right-rear tyre came to light, but MWM and Everingham tried to persevere without a pit stop.

Unfortunately for the Dubbo driver, who had already missed Friday practice this weekend due to food poisoning, it became apparent he would not be able to cling on for a win when he struggled to make the turn at Moffat Corner upon the Lap 9 restart.

It did, however, set up a thrilling conclusion to the contest, from which Robotham emerged with his first race win in the series.

Among those outside the top 10 at the finish were Eggleston’s Matt McLean (#54 VF Commodore) in 12th position, having dropped from seventh on the grid to 17th after the start, and Mouzouris in 15th.