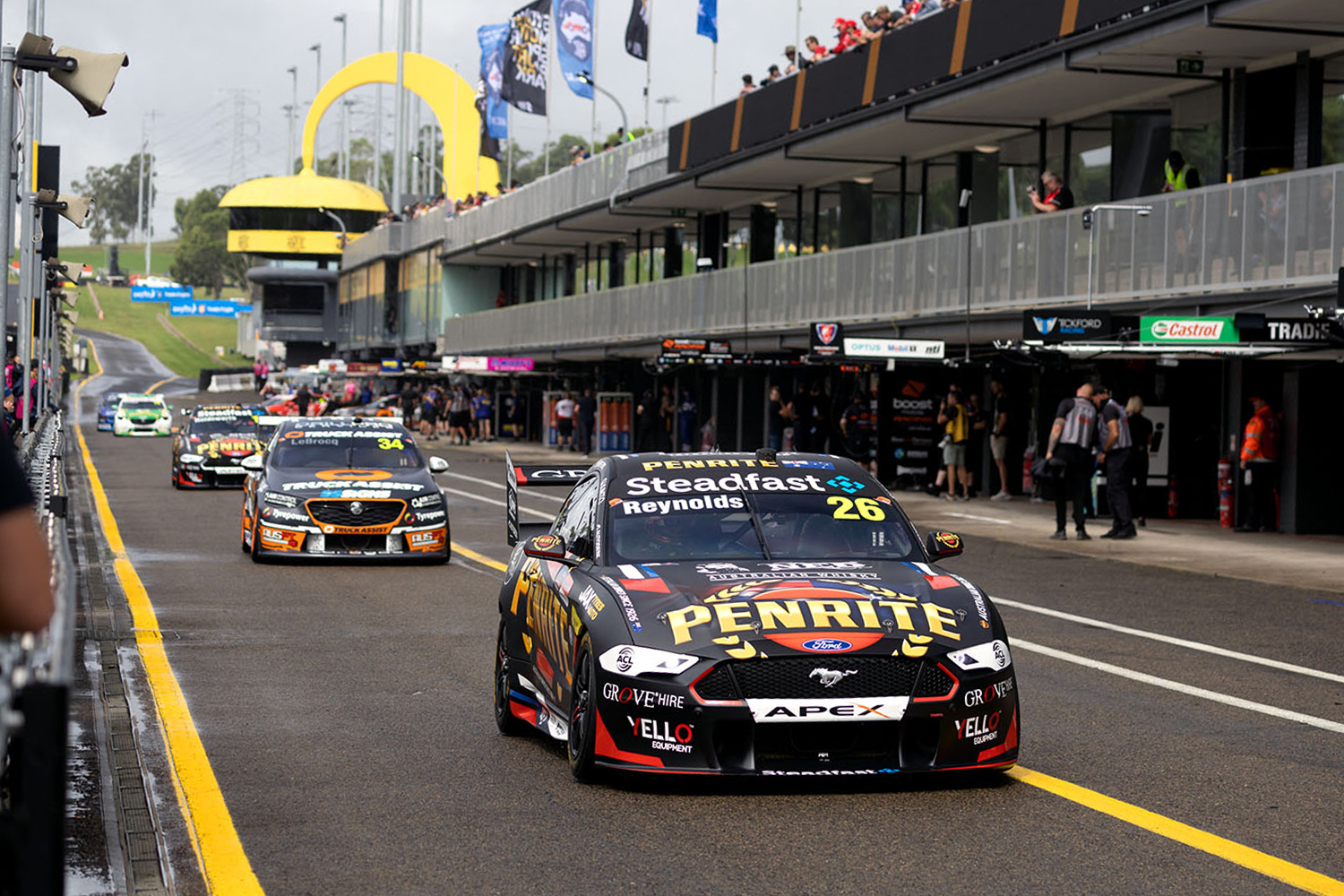 Penrite Racing’s David Reynolds is loving life in the wet at Sydney Motorsport Park, despite tough to tame conditions.

Friday’s pair of practice sessions offered a mix of wet and dry running on a day where the weather couldn’t decide what it wanted to do.

Kelly Grove Racing as it was known last year, enjoyed success in the wet with a Ford Mustang that took to inclement conditions like a duck to water.

For Reynolds, the wet running was a welcome sight. In the end, he wound up sixth and fifth across Friday’s sessions.

Last year Reynolds and then team-mate Andre Heimgartner described the Ford Mustang as being “numb” to set-up changes at times.

What brief dry running the team got on Friday gave Reynolds confidence that Grove Racing has unlocked some potential.

However, he was cautious not to read too much into it just yet given the mixed conditions.

“In the wet, my car is really good. Very, very, very strong in the wet.

“It’s practice so no one knows where everyone is. It feels really good. I’ve never felt so happy. In the dry, wet-dry, it’s just trying to make a lap happen.

“Every lap is kind of different. It depends on who runs before us, whether they drag water onto the track. It’s just a lucky dip.

“In the dry, it’s not too bad. I think we have definitely improved on last year, but we won’t know until it’s fully dry.

Even when conditions were at their best, there were still streams of water running across parts of the Sydney Motorsport Park circuit.

The final turn before the main straight was particularly patchy, proving difficult for the Supercars field to figure out.

Plenty suffered from mid-corner understeer as the slick front tyres washed out on the wet asphalt before kicking into oversteer as drivers tried to put the power down.

Reynolds was among those to have a major moment. Even still, he was able to set a competitive time.

“Huge moment, I thought I was going off there,” said Reynolds.

“There’s obviously more in myself, not stuffing up like that, but everyone would have the same story. It’s just that style of condition.

“It’s really hard to manage. It’s a bit of a lucky dip. If someone goes through a corner and there’s water on the inside and they drag it across and then you hit it, you’re sliding and then grips up then slides.

“You lose that time, then the next lap you’re trying to account for it and it’s not there. It’s just different. You’re just literally trying to drive what you see.”

More rain is forecast for Sydney, with the Bureau of Meteorology forecasting rain this afternoon and evening, and potentially heavier falls on Sunday.

Qualifying for Race 1 of the 2022 Repco Supercars Championship gets underway at 14:45 local time/AEDT.