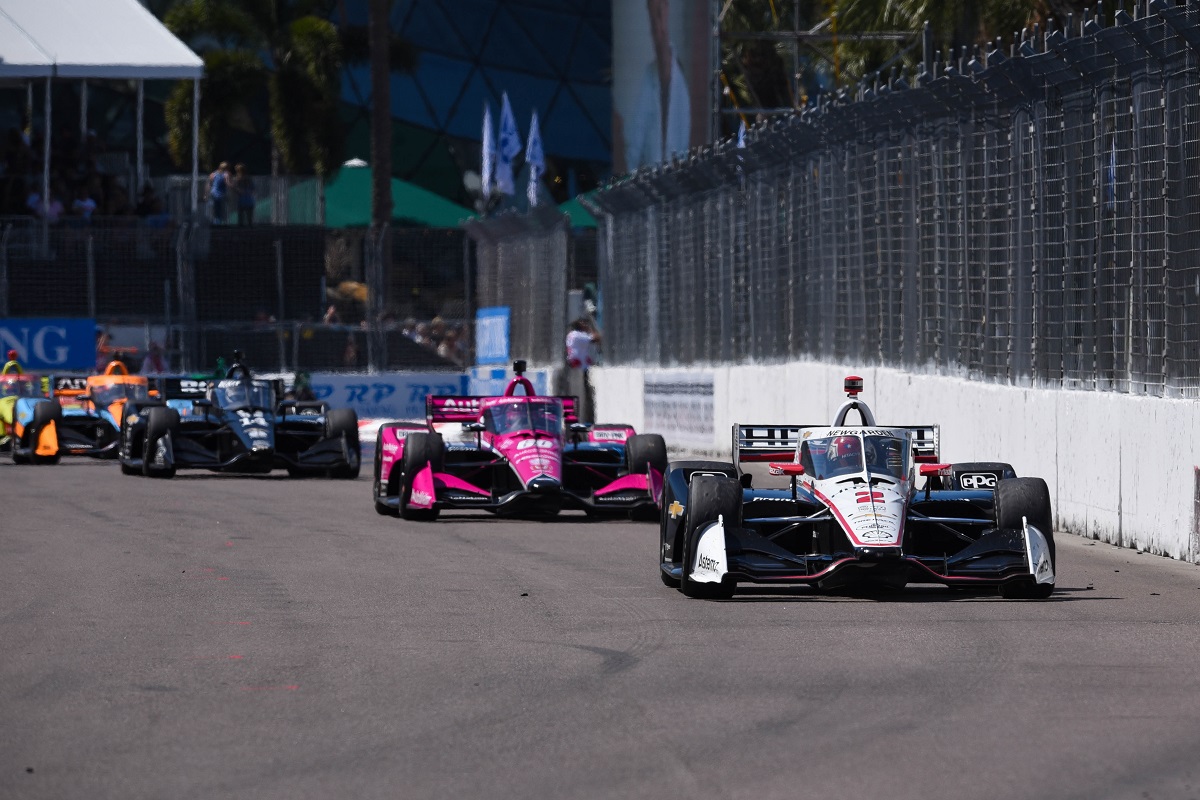 The IndyCar field at St Petersburg

IndyCar has delayed the debut of its hybrid powertrains to the 2024 season.

The 2.4-litre, twin-turbocharged V6 engines were to have been introduced next year, but have been delayed “due to ongoing global supply chain challenges with some hybrid system components”.

Instead, Chevrolet’s and Honda’s current 2.2-litre, twin-turbocharged V6 units will continue to be used in competition in 2023.

“We are pleased with the pace of the technical development of the 2.4-litre, twin-turbocharged V6 hybrid as we prepare it for competition,” said IndyCar president Jay Frye.

“We are very encouraged by the progress our team and our partners have made, but an immediate decision needed to be made to ensure we are prepared for the 2023 season utilising our current 2.2-litre engine package.

“Thanks to our great partners at Honda and Chevrolet for working through this challenging supply chain situation.

“We are going full speed ahead with the 2.4-litre hybrid engine and cannot wait to have it on track in 2024.”

The decision was made in consultation with both Chevrolet and Honda, who reiterated their support of the new formula.

Mark Stielow, director at GM Motorsports Competition Engineering, commented, “We are proud of the hard work and level of commitment by our engine group, along with our teams and partners, in the development of the Chevrolet 2.4-litre engine for our IndyCar programme.

“We were certainly excited to have it on track next season. Chevrolet remains fully committed to the NTT IndyCar Series , and we look forward to debuting our future engine package in 2024.”

“We have finished development and dyno testing of our new internal combustion engine, and once the hybrid system component supply chain issues are sorted, we’ll begin track testing of the new hybrid power unit.”

This is the second time that the introduction of the hybrid engines has been delayed, having originally been set to debut in competition this year.

It was in October 2020 that the first postponement was announced, with challenges caused by the COVID-19 pandemic cited as the reason then.

The new engines will produce a base 800 horsepower, rising to 900 horsepower when supplemented with the hybrid system.

The first track testing of those powerplants will take place on March 30-31 (local time) at Sebring.

As for the current engines, Will Power stated ahead of the Grand Prix of St Petersburg that Chevrolet had made improvements including in drivability, a point backed up by fellow Team Penske driver Scott McLaughlin after winning Race 1 of the season.

They will be among several drivers in action in an Open Test at Texas Motor Speedway this Monday (local time), ahead of Event 2 of the season at the same circuit on March 19-20.