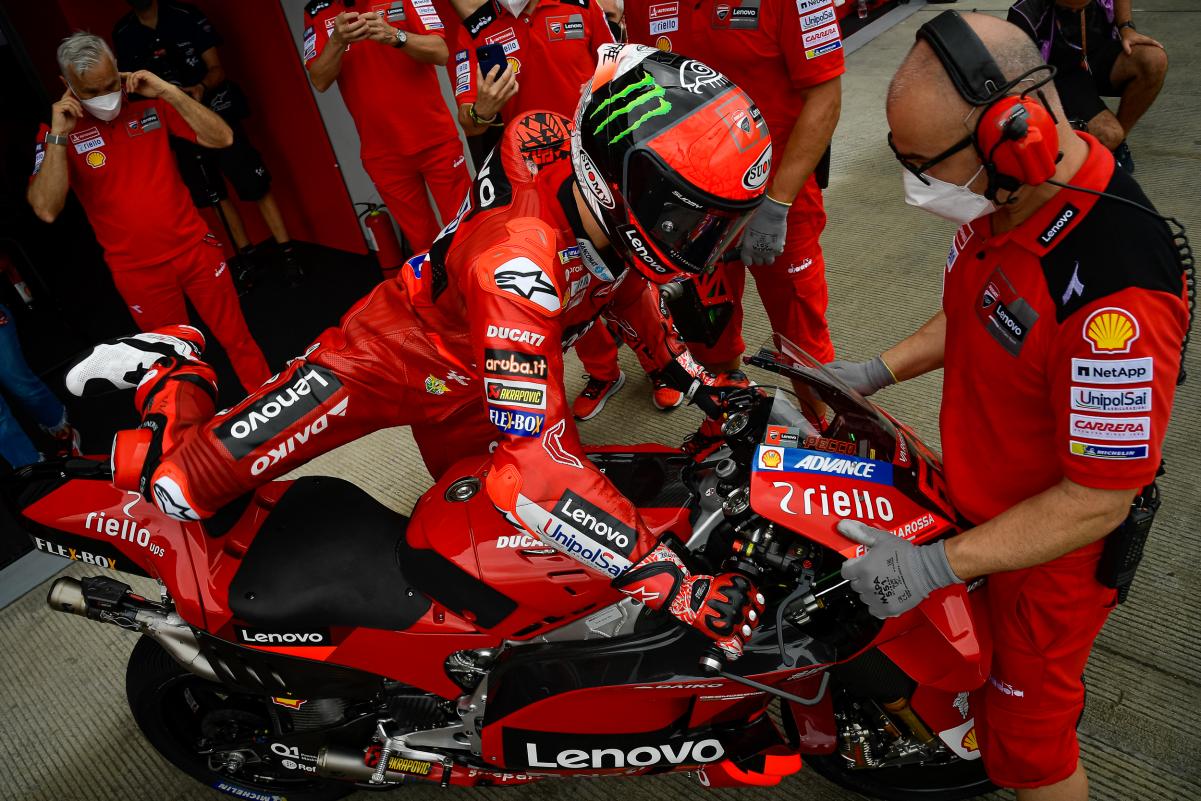 The factory Ducati riders have had a change of engine specification for the 2022 MotoGP season after concerns over power delivery.

Francesco Bagnaia apparently found the new engine to be too aggressive for his liking, and asked for a different specification.

However, that means Jack Miller will also have to switch to whichever powerplant Bagnaia chose, given MotoGP’s regulations stipulate that each rider in a factory team must use the same.

Ducati Lenovo Team manager Davide Tardozzi confirmed some sort of change but reacted angrily to the speculation, rebuffing suggestions that its lead rider had complained per se.

“Because I want to say, just we give to Pecco a different spec; you can have the possibility to manage the engine towards the riding style of the rider, and this engine is towards the rider’s style of Pecco, and also Jack.

“So, the other guys were happy about a different spec and that’s what happened.

“I mean, we know that another company in Sepang has three different spec; why not everybody goes to this brand and ask which one has Marc Marquez or which one has another rider of them?”

Ducati Corse general manager Gigi Dall’Igna had stated ahead of the two Official Tests of pre-season that the Bologna marque had developed a “completely new engine” for this year.

That which its works team is now using has been variously reported as an upgrade of the 2021 specification or something of a hybrid between the 2021 and 2022 designs.

Tardozzi, however, would not divulge that information when asked directly about such specifics.

“I think we are happy about the riders’ choice and we think we give to all the riders the best possibility we can, so let’s see how the season starts and we’ll see in the end what happens,” he remarked.

“But it will be a very, very tough season because a lot of very, very competitive bikes and riders.”

What the factory team boss has apparently affirmed in his comments about “the other guys” and their choice of engine is that the other Desmosedici GP22 riders in the field are using the 2022 engine.

That is, Pramac Racing’s Jorge Martin and Johann Zarco, and Mooney VR46’s Luca Marini, have not made the same choice as Bagnaia.

The other three Ducati riders in the field are on GP21s and it was one of them, namely Gresini Racing’s Enea Bastianini, who was fastest of anyone at the two-day Sepang test.

That much did not surprise Miller, who cited the fact that he sometimes went quicker than the factory riders in testing when he was at Pramac.

However, he, Bagnaia, and Tardozzi had all made comments about the driveability of the 2022 engine during their first test in Sepang.

Miller referred to a focus on “just that first touch to get it as smooth as possible”, while Bagnaia said Ducati’s engineers would be working on electronics ahead of the second and final pre-season test at Mandalika.

Both reportedly went on to test the engine which #63 ultimately chose during those three days at Mandalika, and they must now use that specification for the season.

That is because Ducati is not a concession manufacturer, and hence its engines are homologated for the season once used in Free Practice 1 at Round 1 of the year.

Red Bull KTM Factory Racing’s Brad Binder was fastest in that session at the Qatar Grand Prix with a late 1:54.851s on a new hard front tyre and new medium rear.

Martin was the best Ducati rider in 12th, Miller was 13th-quickest, and Bagnaia ended up 18th after crashing at Turn 6 of the Lusail International Circuit with just over five minutes to go.