McLaughlin holds off Palou to win in St Petersburg

McLaughlin holds off Palou to win in St Petersburg 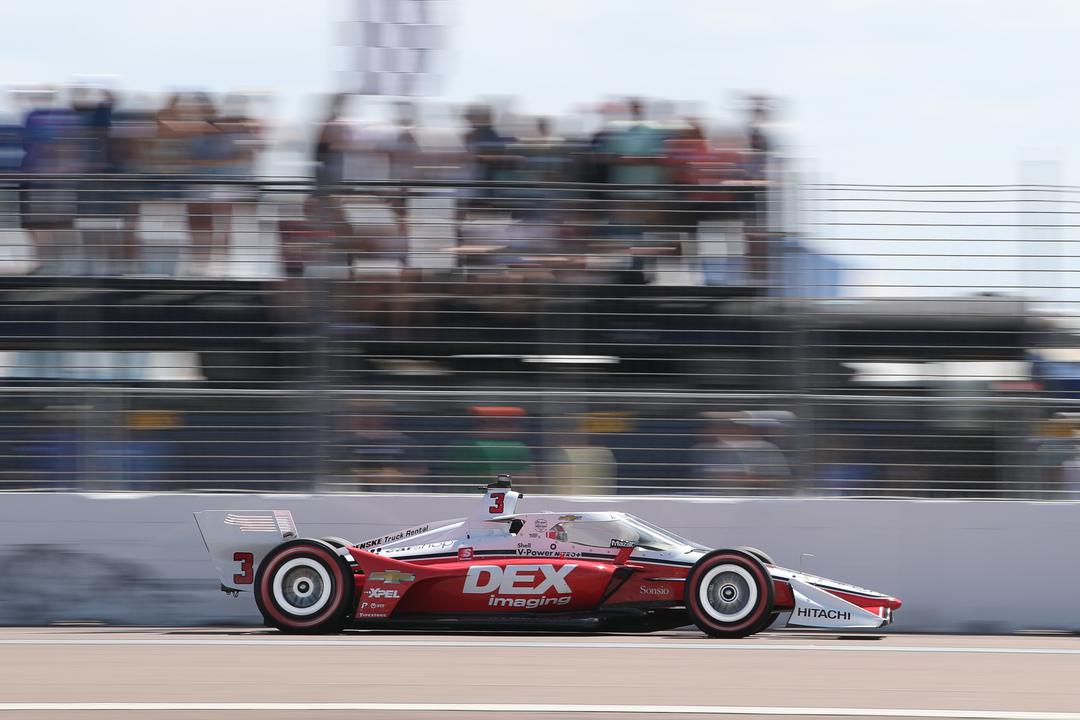 Scott McLaughlin has become an IndyCar race winner after holding off 2021 champion Alex Palou in a tense finish at St Petersburg.

They were nose-to-tail at the start of the final lap, with backmarker Devlin DeFrancesco immediately in front on the road, but McLaughlin held on to win by an official margin of 0.5095s.

Will Power suffered a setback when a Lap 25 Caution ruined his strategy to run black tyres in his first stint, but salvaged a third placing in the #12 Team Penske entry.

At the start of the race, Power had in fact been the only driver in the top 10 on primary tyres, and he got loose as the field took the green flag.

Power held Romain Grosjean (Andretti Autosport) at bay for fourth position at Turn 1, where they apparently made light contact, and Marcus Ericsson (Chip Ganassi Racing) was able to sweep around and take fifth.

Scott Dixon (CGR) emerged behind Grosjean in seventh, and he was among a number of drivers towards the back end of the top 10 and beyond who would soon commit to a three-stop strategy, with a stop on Lap 11.

McLaughlin, meanwhile, was stretching his lead over Herta at the head of the field, beyond four seconds on Lap 17.

Power had regained third position from VeeKay on Lap 15, and that was the start of a rapid slide out of the top 10 for the Dutchman as his red tyres wore out.

Herta was having similar, if not as dramatic, trouble with his rubber, and Power outbraked the #26 machine at Turn 1 at the start of Lap 20.

At that point, McLaughlin was a full six seconds up the road, but Power slashed that by more than half in the next five laps as he continued to make time on his initial set of black tyres.

However, his charge was halted on Lap 25 when a Caution was triggered by rookie David Malukas (Dale Coyne Racing w/ HMD Motorsports) hitting the wall at Turn 3.

Once pit lane opened, 11 of the 12 drivers who had not yet pitted would do so, leaving Alexander Rossi (Andretti Autosport) in the lead, from three-stoppers Dixon, Pato O’Ward (McLaren SP), Josef Newgarden (Penske), and Simon Pagenaud (Meyer Shank Racing).

McLaughlin just beat Power out of his pit box and they would take up 12th and 13th position respectively, first of those on a two-stop strategy (save for Rossi), but with the latter first of anyone in the field on the red tyres at that point.

Palou sat 14th, well up from his starting position of 10th when viewed in strategic terms, with Herta 15th.

Ericsson, Graham Rahal (Rahal Letterman Lanigan Racing), and Grosjean filled 16th to 18th, with those three having been involved in a squeeze in pit lane.

The race restarted on Lap 34 and Palou was able to pinch 13th position from Power at Turn 5, while Rahal briefly got ahead of Herta.

Rossi pressed on until the end of Lap 37, when he swapped from blacks to reds, before Herta on blacks went down the inside of Power at Turn 10 on Lap 38, taking an official 13th position but third of the two-stoppers.

Newgarden, whose first stop came on Lap 9, kicked off the second pit cycle on Lap 41, before Pagenaud and O’Ward came in.

Dixon made his second stop on Lap 48, also staying on blacks, leaving VeeKay to take the lead.

Callum Ilott (Juncos Racing) inherited second position, from McLaughlin, Palou, Herta, and Power, with Dixon resuming in 11th but best of those on his strategy.

Ilott pitted on Lap 57 but VeeKay, who took service for the first time on Lap 21, was trying to make a two-stopper still work.

He peeled off on Lap 62, but Herta was in for his final stop just a lap later, taking another set of blacks on Car #26.

That caused Team Penske to respond, calling McLaughlin down the lane on Lap 64, and the rest of the two-stoppers were into the pits within two more laps.

As such, with 34 laps to go, Dixon led again and O’Ward was second, but those two needed to pit again.

McLaughlin was the effective leader in third position, ahead of Palou and VeeKay, the latter of whom overtook Power as he merged after a stop for fuel and a switch back to black tyres on Lap 66.

Pagenaud was seventh, albeit off-strategy relative to those immediately around him and thus soon to pit, from Herta, Rahal, and Newgarden.

O’Ward made his final stop on Lap 73, while Power moved into the effective top three when he overtook VeeKay for fourth on Lap 78.

Dixon pitted from the lead on Lap 79, cleansing the order for the run home, with every driver on black tyres.

McLaughlin was back in front, with a margin of just over two seconds to Palou, with Power in third and VeeKay in fourth.

Johnson had hardly been a factor all afternoon, but the CGR driver did team-mate Palou a big favour when he held up McLaughlin midway through the final stint.

By the time both Cars #3 and #10 had lapped #48, at the start of Lap 88, Palou had closed to just six tenths of a second behind McLaughlin.

The New Zealander grew his margin back beyond a full second in the next half-dozen laps, but it continued to ebb and flow in traffic.

McLaughlin and Palou were nose-to-tail with three laps to go, and then they ranged up on DeFrancesco (Andretti Steinbrenner Autosport), who was not going to let them past.

Just 0.3176s was the margin as they took the white flag, but McLaughlin kept Car #3 ahead of Car #10 and wrote himself into the IndyCar record books.

Power finished 2.4671s behind the lead in third, while Herta made the chequered flag in fourth position after overtaking VeeKay on Lap 97.

VeeKay would lose another position before the end as Grosjean climbed to fifth, while Rahal ended up seventh.

Dixon had looked a threat for Grosjean after his final stop but would remain eighth, with Ericsson taking ninth and Sato rounding out the top 10.

McLaughlin is the early series leader on the way to Texas Motor Speedway on March 19-20 (local time), an event which will be streamed live on Stan Sport.