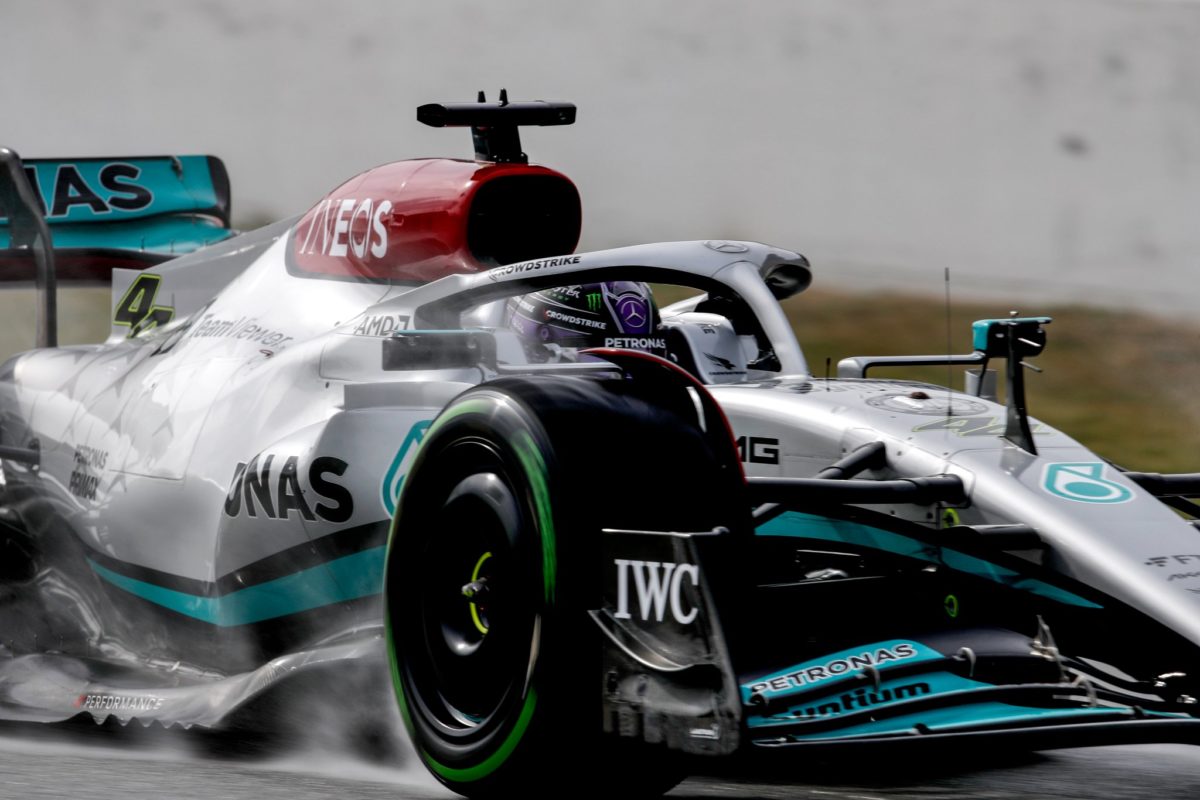 Lewis Hamilton during the final afternoon of F1 testing in Spain

The pair combined for more than 150 laps on Friday in mixed conditions, Russell recording a 1:19.233s in the morning session.

A busy afternoon for Hamilton on what was initially an artificially wet track ended with the Brit setting a 1:19.138s, the fastest time across the three days of running.

Their efforts were enough to propel Mercedes into second in terms of mileage for the test, Ferrari topping the list as it’s done since Wednesday.

The Scuderia was the first to log 1000km of running and was the only team to surpass 2000km across the three days.

With Charles Leclerc and Carlos Sainz featuring towards the top of the timesheets throughout, it has left many to suggest the Scuderia is among the early season favourites.

McLaren too continued to show well, Daniel Ricciardo setting 86 laps in the afternoon session to build on the 52 set by Lando Norris earlier in the day.

Nonetheless, the top of the pecking order looks to consist of the top four from last year’s constructors’ championship.

The final day of running was cut short for four teams with a number of red flags interrupting proceedings.

A hydraulic issue for Fernando Alonso on Friday morning sparked a fire in the Alpine which ended its test before lunch time.

At Haas, a difficult 24 hours was compounded when a leak was found in the car and couldn’t be resolved, while Scuderia AlphaTauri also had an interrupted day after Pierre Gasly crashed at Turn 6.

Finally, Aston Martin’s running was also curtailed after Sebastian Vettel rolled to a halt in the final minutes before lunch.

None of the four were able to get back on track.

Of the regular runners, Valtteri Bottas recorded the least number of laps for Alfa Romeo Sauber.

The Finn chalked up just 54 laps across the three days, and less than 50km of running on the final day – and that coming in the afternoon while the track was wet.

In total, the Swiss squad managed just over 800km of running.

That was still more than Haas, which recorded just 790km between Nikita Mazepin and Mick Schumacher.

Mazpein was behind the wheel to start the day, though got just nine laps in before the team was forced to call time on its test.

Teams now have a week and a half to work through the data they gathered in Spain before reconvening in Bahrain for another three days of testing from March 10.

The season proper will then begin on March 18 with opening practice for the Bahrain Grand Prix.