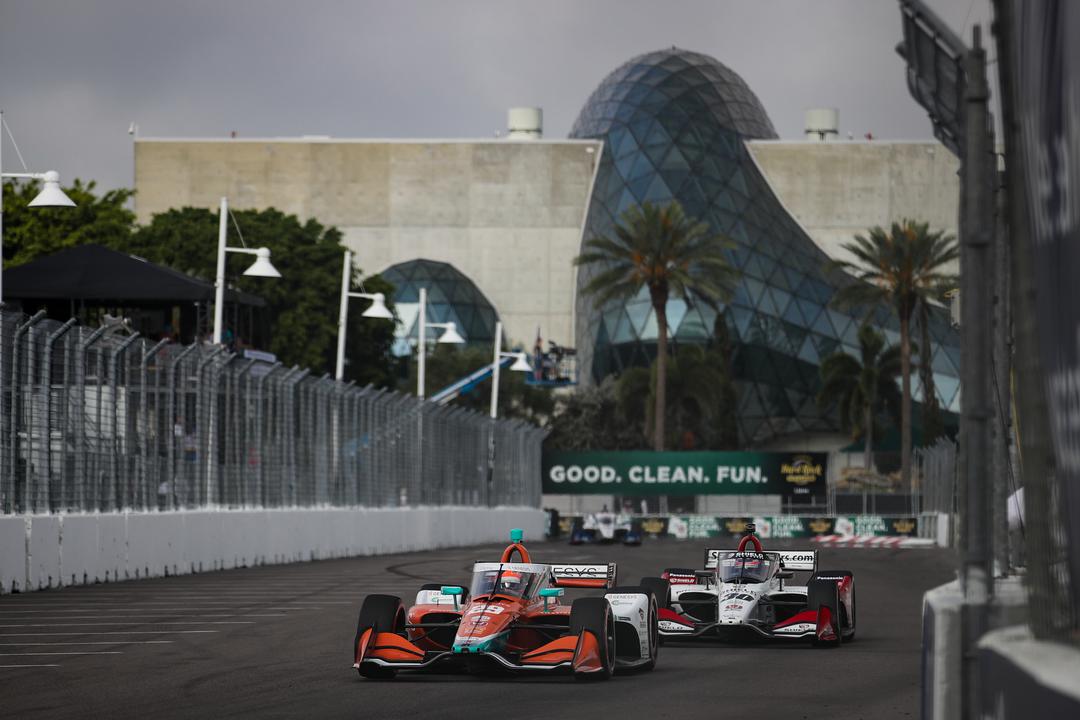 A pack of IndyCars at St Petersburg in 2021

Leading drivers are underwhelmed by a new rule which allows IndyCar to disable push-to-pass for lapped cars which have been shown the blue flag.

Rule 7.2.5.1 compels a lapped car to immediately give way to an overtaking car when it has been shown the blue flag on a road/street track, but has been varied this year by way of an addition which reads, “INDYCAR may disable Push to Pass for Lapped Cars (defined as a Car that is at least one lap behind all Cars that are on the Race leader’s lap).”

That provision, where used by officials, would render it impossible for a lapped car to use ‘the button’ in a bid to keep a faster car behind it.

However, according to the top three in Practice 1 at this weekend’s St Petersburg season-opener, it will make little difference.

Romain Grosjean, Colton Herta, and Will Power all agreed that it would be preferable if push-to-pass could be disabled for cars which are about to be lapped as they are the ones which will try and fight.

“I think it makes no difference because they’re already a full lap down, so they’re not going to try to stay in front of you,” said Herta.

“What they should do is do it for when you’re about to lap them.

“If they’re a full lap down to the field, they’re not going to defend with push-to-pass and make a hard time, but they will if they’re about to go one lap down.”

His Andretti Autosport team-mate Grosjean added, “Yeah, first time I heard about the rules, I thought it was if you were going to lap down a car that he was going to have his push-to-pass disabled to fight the leader, but no, it’s if you are eligible for a command blue flag, which anywhere there’s a blue flag you have to let by.

“I wish they had pushed it a little bit further, but it is what it is.”

Power has been an advocate for giving lapped drivers a lap back in the event of a full-course Caution, to discourage them from trying to get in the way when the leader attempts to pass.

The Team Penske driver once again called for stricter enforcement of blue flags.

“Every single driver in that meeting except for maybe one or two said we should enforce the blue flag when you’re coming around to lap the back of the field,” declared Power.

“We should do something about it.

“So, what does that mean when all the drivers say that? Nothing? Because clearly it doesn’t.”

Asked to clarify if he supported what Grosjean and Herta had said, Power confirmed that was so.

“Yes, that would be really great if they did that on the lap that… not when you have to be down a lap from the whole field,” said the Queenslander.

“It’s kind of ridiculous. At that point it’s the end of the day for that guy and they usually let you go anyway.

“It’s more the guys at the back of the train trying to stay on the lead lap.

“I think they’re trying to work it out. I think they want to do that. I just don’t know whether they have the ability yet with the system.”

When Herta pointed out, “Well, they’re doing it for if you’re a whole lap down,” Power added, “So, they obviously have the… I don’t know what it is when you try to get something like this done.