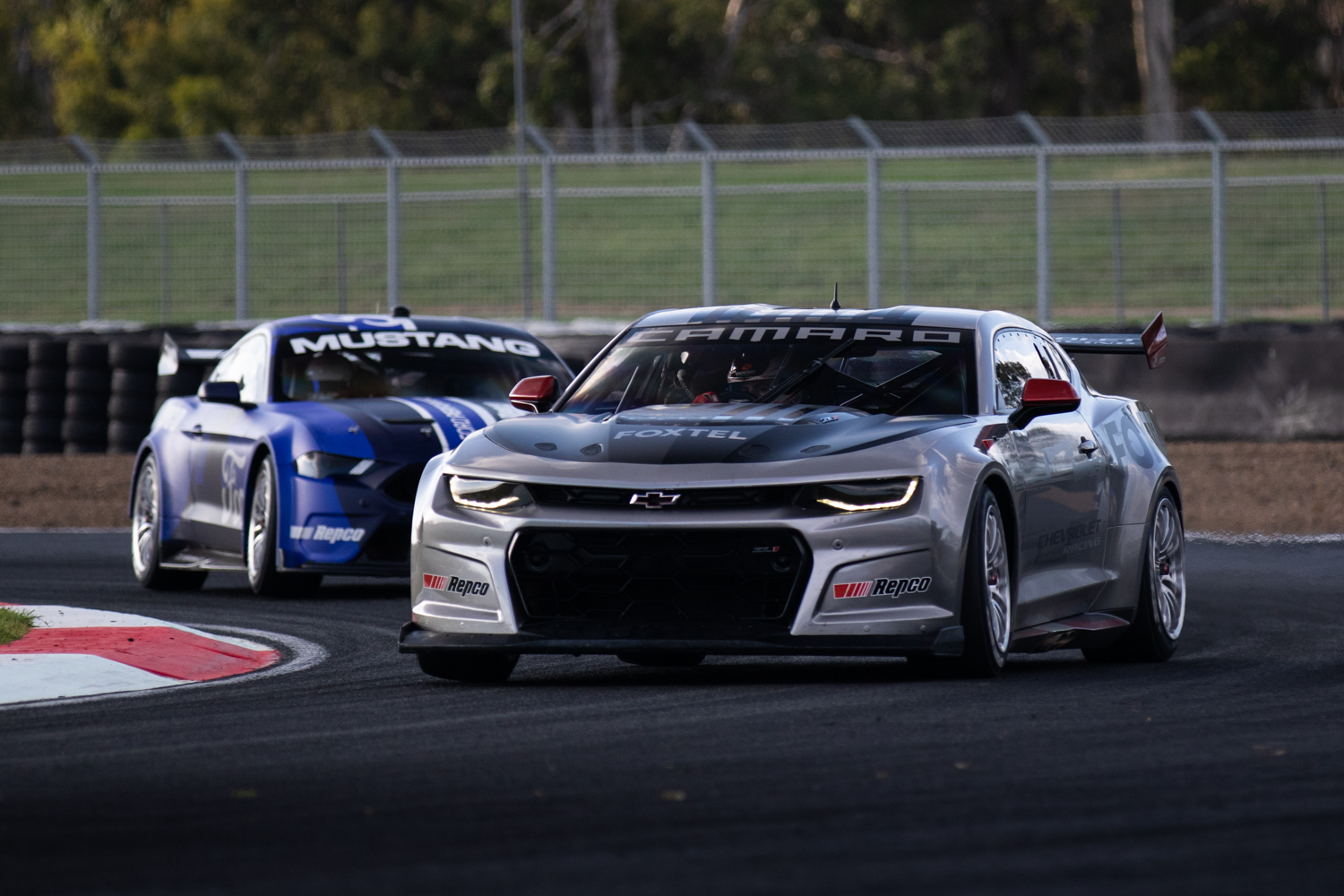 The Chevrolet Camaro and Ford Mustang prototypes at Queensland Raceway

Supercars has elected not to run its Gen3 prototypes in pre-season testing this week at Winton Motor Raceway to fast-track the installation of its sequential stick shift.

Earlier this month the category confirmed it would not adopt paddle shift and automatic throttle blip and will instead continue using the gearbox configuration as it appears in the Gen2 cars.

After a series of hit outs at Queensland Raceway, plans were in place for Supercars to continue testing the new-look Ford Mustang and all-new Chevrolet Camaro tomorrow and Wednesday at Winton Motor Raceway.

However, the testing programme has been put on hold until the gearbox configuration is revised.

“I think we all knew deep down what the fans wanted,” Supercars head of motorsport Adrian Burgess told Speedcafe.com.

“We knew what the drivers wanted, I think it was a very easy decision, and it was obviously the right one. We just had to go through the process before we could come out with it.

“Now we’ve made the decision, we’ve moved on. There are a couple of mods we’ll do to the car, we’re changing the selector slightly for what they call the NASCAR-spec selector.

“Because we’ve had to design the car around doing either, there were compromises within the design to be able to go paddle or to go stick shift.

“There are some parts that are due this week from Xtrac [Supercars transaxle supplier], so we didn’t see the point in going to Winton with paddle shift again when we need to get the gear shift in.

“We need to be able to then make sure the engines are built correctly because the engine will be susceptible to over-revs now as it is currently.

“A little bit of hardware will change in the engines and the mapping now that these engines are different to drive with a single throttle body.

“It wasn’t worth us testing with paddle shift still and wasting two days where we’re not really going to learn anything, so the correct decision is just to sit back and wait a little bit and get these things installed in the car correctly.

“We’ve got to remember these are prototypes and this is what you do with prototypes, you make changes, you find things, and then you fix them before you make 26 of them.

“We’re not stressed about it. We’re still on track with some of the other key timelines and decision timelines that we’ve got going forwards. So yes, it’s the right thing to do.”

As a result of the decision to ditch paddle shift, some chassis floor reinforcement will need to happen to account for the lever.

The engines themselves will have to be strengthened too, although Burgess doesn’t envisage a cost increase given the expensive electronic actuators will be ditched.

“We’ll probably change some of the top end a little bit,” said Burgess.

“Paddle shift, you can stop it from over-revving. With a manual, you won’t. The drivers, if they get it wrong, will still buzz them.

“It won’t really affect the price of the engine, it will be just a more robust part compared to the safety of having a paddle shift.

“It won’t slow us down, it won’t slow the programme down or anything. The engines are already being modified now. It’s not a big issue.”

As for when the prototypes will be back on track, Burgess hasn’t set a date.

Whether the cars will feature on-track at Sydney Motorsport Park for the opening round of the 2022 season is up in the air.

Beyond that, Supercars will at a minimum test the prototypes at Symmons Plains International Raceway after the March 26-27 event.

“We’re not sure yet,” Burgess said of when the prototypes will be back on track.

“Like all these things, there’s a couple of other issues we’re working towards fixing. So we’ll just work as fast as we can. We’ll have a look what dates we’ve got.

“We are going to go to Tassie. We’ve said that already, that’s obviously a very heavy braking circuit, so we’ll definitely be going there for two days after the event.

“We’ll just work backwards from that and see when we’re ready. SMP, or maybe we’ll come here [to Queensland Raceway] again, just make sure we’ve got it all working. Give it a shakedown.

“Yeah, no solid plan locked in.”