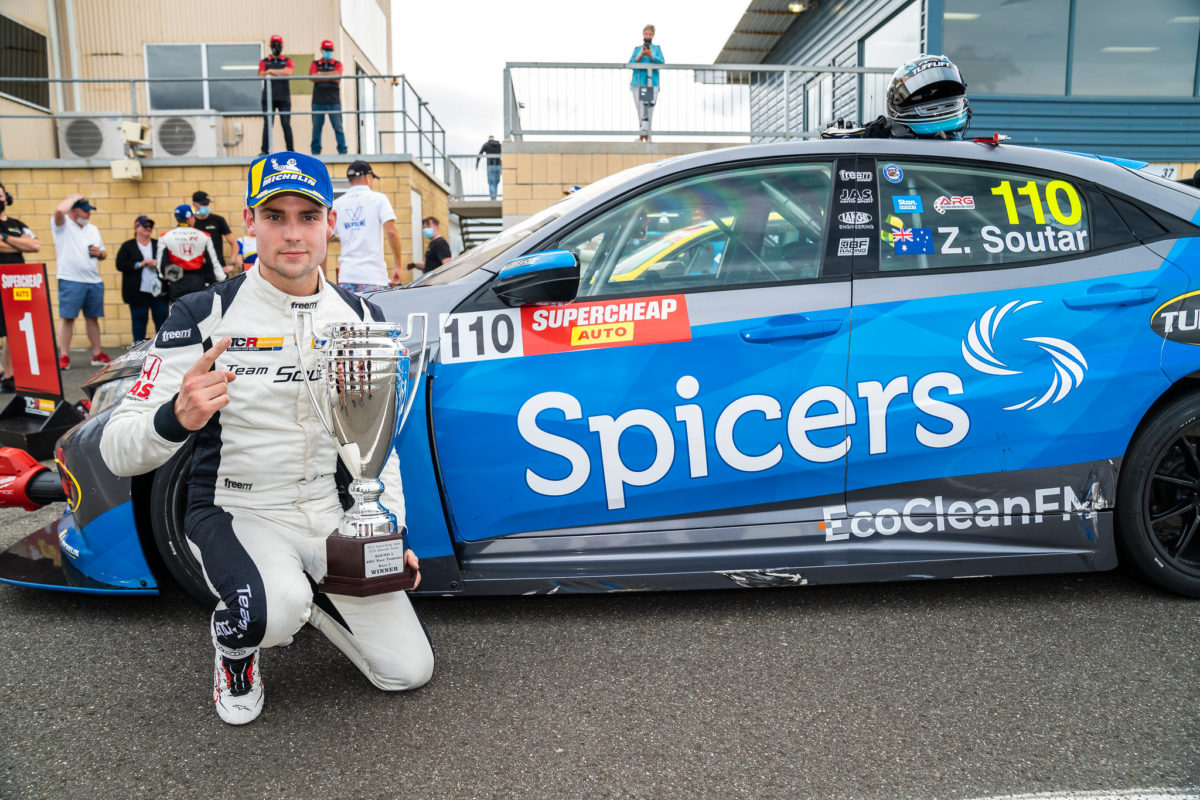 Zac Soutar has his first ever win the Supercheap Auto TCR Australia Series after Josh Buchan was penalised for weaving in Race 3 at Symmons Plains.

Soutar took the chequered flag in second position but Buchan had a five-second penalty hanging over him for weaving as the field was about to take the restart after a red flag period.

It meant that the #110 Team Soutar Motorsport entry was promoted to the official victory, while Tony D’Alberto made for a Honda one-two in the #50 Wall Racing Civic Type R.

Race 2 winner Jordan Cox was classified third in the #33 Garry Rogers Motorsport Peugeot 308, with Buchan relegated to fourth in the #30 HMO Customer Racing Hyundai i30 N.

Of the 18 starters, 15 made the finish, and 12 on the lead lap, with returning 2019 series winner Will Brown finishing 13th after he found himself stuck in the kitty litter with the race having barely begun.

Brown had lined up second on the grid for the finale at AWC Race Tasmania but made a somewhat tardy getaway, at least relative to Soutar from fourth on the grid, and they tangled on the run to Turn 2.

The #999 Melbourne Performance Centre Audi RS 3 went across the nose of the #110 Civic Type R and pirouetted into the gravel trap, bringing a Safety Car almost immediately.

Buchan led the field back to green on Lap 4, from Soutar, D’Alberto, Cox, and Dylan O’Keeffe, the latter of whom would soon be in combat with Hyundai privateer Brad Shiels.

When O’Keeffe went down the inside to reclaim fifth position on that restart lap, Shiels attempted the cutback at Turn 7 but tagged the left-rear corner of the #8 Peugeot, sending it spinning into the pit wall.

O’Keeffe was able to walk away from the scene but his 308 had dislodged the tyre barrier, necessitating a red flag to reset the safety installation.

After a delay of more than a quarter of an hour, the drivers were sent back out at around 17:00 local time for approximately 10 minutes of action.

It was then that Buchan brought himself undone, given he was still weaving to get some temperature into his Hyundai’s tyres after the Safety Car had pulled away.

He gapped Soutar at the restart and got almost 2.5s clear before word came through of the penalty.

Try as he might, Buchan could not make up the other 2.5s he needed to hang onto the win.

D’Alberto was officially 0.9320s away from victory in second spot, while the battle which Cox and Shiels waged over fourth on the road ultimately decided the race podium.

James Moffat did not take the start as a result of crash damage to his Renault Megane RS which was sustained in a coming-together with Hanson in Race 2.

Despite missing out on a race win this weekend, Buchan has a slim series lead over Soutar at this early stage of the campaign.

Round 2 of the Supercheap Auto TCR Australia Series takes place at Phillip Island on March 18-20, with live streaming on Stan Sport.