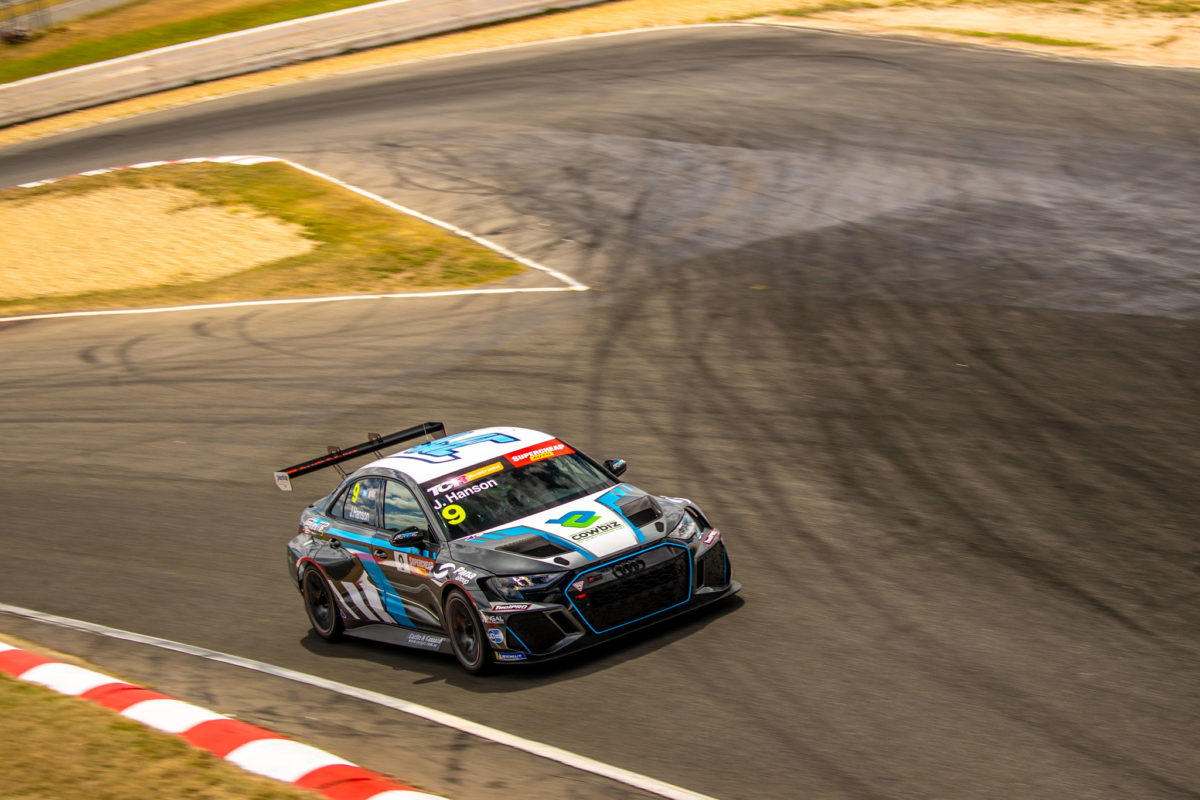 Jay Hanson has broken through for a career-first race win in the Supercheap Auto TCR Australia Series, taking out the Round 1 opener at Symmons Plains in the new Audi.

The Melbourne Performance Centre driver led all 26 laps in what was the first race for the new-generation RS 3 in a domestic TCR competition, with HMO Hyundai i30 N steerers Josh Buchan and Nathan Morcom rounding out the podium.

James Moffat finished fourth in a Garry Rogers Motorsport Renault Megane RS, ahead of team-mate Aaron Cameron in a Peugeot 308, privateer Zac Soutar in a Honda Civic Type R, and Will Brown in an MPC Audi.

The rest of the top 10 at the chequered flag was Tony D’Alberto (Honda), from Dylan O’Keeffe (Peugeot) and Brad Shiels (Hyundai).

Back at the start, Hanson made a slightly nervous getaway but it was good enough for him to lead the pack into the first braking zone, from pole-sitter Morcom, Buchan, and Brown.

Moffat dived down outside when the field arrived at the Hairpin for the first time, and he was able to drive past Soutar and into fifth position on exit.

Buchan passed HMO Customer Racing team-mate Morcom for second on Lap 2, and Moffat went down the inside of Brown into Turn 6 on that same lap.

That put the 2019 series winner down to fifth, and Brown lost two more positions on Lap 3 when Cameron lunged past at the Hairpin and Soutar was able to follow.

Meanwhile, Hanson was running away with the contest, and he moved three seconds clear of Buchan when he reset the lap record on Lap 11.

The youngster continued to stretch his margin, which amounted to 5.2101s at the chequered flag.

Moffat tailed Morcom towards the end, while Brown and D’Alberto put Soutar under some late pressure, but the real intrigue became the battle for 10th, and hence top spot on the grid for Race 2.

Fabian Coulthard (Honda) looked like he had it when he went down the inside of Shiels at Turn 6 on Lap 13, but gave it up three laps later when he went wide at the Hairpin and was slow up the back straight in the Stan Sport Civic Type R.

Still, Coulthard hung on for 11th spot in the end despite pressure from Michael Caruso, who drove his Ashley Seward Motorsport Alfa Romeo Giulietta from the rear of the 19-car grid after more power steering problems in qualifying.

Caruso effectively started 18th, however, after Jordan Cox manage to lose control of his Peugeot on his way to the grid, running off the road at the kink in the back straight and glancing the wall on drivers’ left.

He did start the race, but from pit lane instead of the 10th position in which he had qualified, and reached the finish in 16th position.

Race 2 will be held tomorrow from 14:25 local time/AEDT and will be streamed live on Stan Sport.