A three-race format for TCR’s Supercheap Auto Bathurst International event has been revealed with the publication of the 2022 Sporting Regulations.

As was the case when the 2021 Supercheap Auto TCR Australia Series wrapped up as part of last year’s six-day Repco Bathurst 1000 extravaganza, the final round of this year’s campaign will be comprised of a trio of 21-lap races.

That is revealed in Article S8 of the series’ 2022 Sporting Regulations, which stipulate that the other six rounds of the series shall also be run to a three-race format, although each of those will be 30-minute encounters converted to a prescribed number of laps. 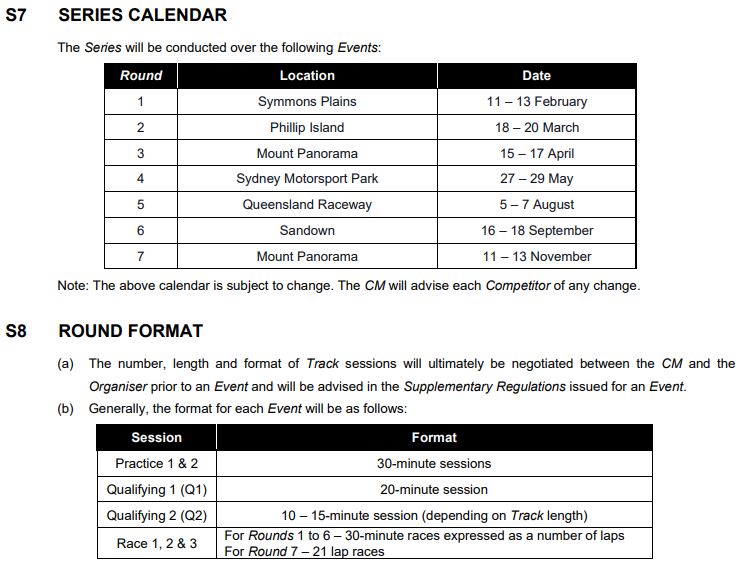 The relevant sections of the 2022 Sporting Regulations

The original plan for the Bathurst International dating at least as far back as 2019 was a two-driver, 500km enduro race which would attract competitors from TCR series the world over.

That specific concept was shelved in 2020 due to Australia’s external border closure, before what would have been the inaugural event was cancelled altogether due to state travel restrictions.

No commitment to the 2021 format was given until the ‘TCR Bathurst 400’ was announced in July, notwithstanding Speedcafe.com’s understanding that Supercars’ season-opening ‘Mount Panorama 500’ was so named because the ‘Bathurst 500’ moniker was already taken.

To be clear, the revelation that the 400km format will persist into 2022 hardly rules out a significant international element, especially as ‘fortress Australia’ begins to open up later this month.

However, it is highly likely that the call has been made for reasons of cost, specifically the expenses of facilitating in-race refuelling.

A 21-lap contest around the Mount Panorama Motor Racing Circuit amounts to just over 130km of racing, with sighting laps and the like on top of that.

Australian Racing Group CEO Matt Braid told Speedcafe.com last August regarding the 2021 format, “One of the reasons we went to the three races, 21-lap [format] and the 400km versus 500km is obviously the investment to switch to endurance spec on the cars is significant.

“We didn’t want to put more burden on the teams this year if we weren’t going to have a fully-fledged enduro with internationals.

“A component to consider was obviously the financial impact on the teams to upgrade or alter the specifications of the cars, particularly around refuelling.

“That was not the only reason, but certainly a factor in looking at how we could do an alternate longer distance format without looking at the refuelling capabilities.”

Consistent with its status and race lengths, Round 7 will be worth 50 percent more points than the preceding six rounds.

The winners of Races 1 and 3 at the Bathurst International will receive 75 points each, while the Race 2 winner gets 60 points, as compared to a 50-40-50 yield for the other events.

Race 2 is worth less than the others due to the nature of its grid determination.

Round 1 of the 2022 Supercheap Auto TCR Australia Series is the headline act this weekend at Symmons Plains, where AWC Race Tasmania is being held.

Will Brown set the pace in a Melbourne Performance Centre Audi in Practice 1, with Practice 2 due to start at 14:15 local time/AEDT.

Tomorrow’s action will be streamed live on Stan Sport.