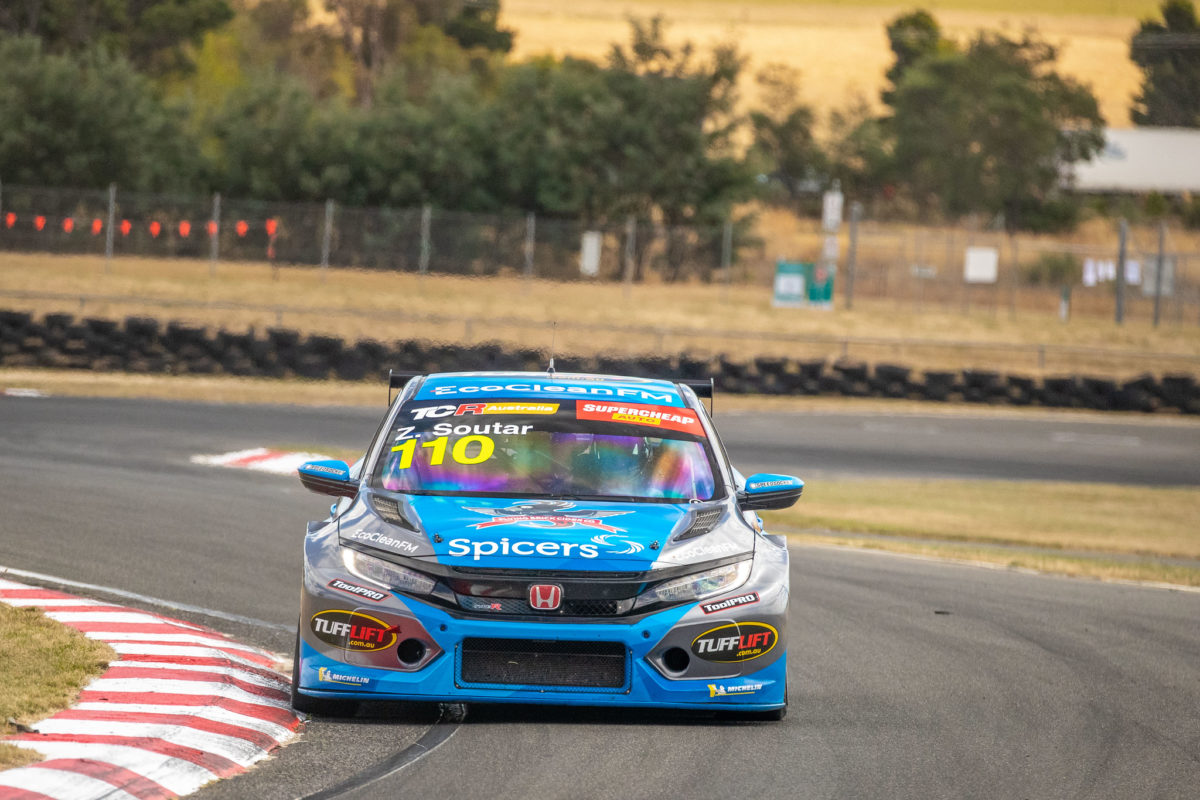 Supercheap Auto TCR Australia Series privateer Zac Soutar has set the pace in an ultra-tight Friday of practice for Round 1 of the 2022 season at Symmons Plains.

Soutar wheeled his Honda Civic Type R to a 0:55.4522s in the latter stages of the second, half-hour session for the hot hatch category at AWC Race Tasmania, knocking off some of the big names in the field.

James Moffat and Dylan O’Keeffe made for two Garry Rogers Motorsport entries in a top three covered by only 0.0317s, with debutant Fabian Coulthard fourth-quickest in a Wall Racing Honda and Practice 1 fast man Will Brown fifth.

HMO Customer Racing’s Nathan Morcom was quick early on, moving the benchmark on each of his first three flying laps.

The Hyundai driver held sway with a 0:55.8952s when he pitted after half a dozen minutes, before Brown steered his Melbourne Performance Centre Audi RS 3 to a 0:55.7794s.

Soutar (Team Soutar Motorsport) went faster than all of them with that 0:55.4522s inside the final six minutes, and there was little movement at the pointy end thereafter.

Coulthard did, however, subsequently creep from fifth to fourth with a 0:55.4996s, a time which was only 0.0474s slower than Soutar’s best and less than a tenth quicker than Brown’s.

Sixth through ninth were Jordan Cox (Peugeot), Morcom, Tony D’Alberto (Honda), and Josh Buchan (Hyundai), the latter of whom was last classified of those to go underneath Brown’s practice 1 benchmark of 0:55.7197s.

Bailey Sweeny (Hyundai) rounded out the top 10, 2021 series runner-up Aaron Cameron (Peugeot) was 11th, and Michael Caruso ended up 19th with a 1:00.6551s after a power steering problem for the Ashley Seward Motorsport Alfa Romeo Giulietta.

Caruso thus propped up the timesheet for Practice 2, with Kody Garland not taking to the track after crashing his Renault in Practice 1.

Qualifying, to be held in two parts, starts tomorrow at 14:20 local time/AEDT and will be streamed live on Stan Sport.