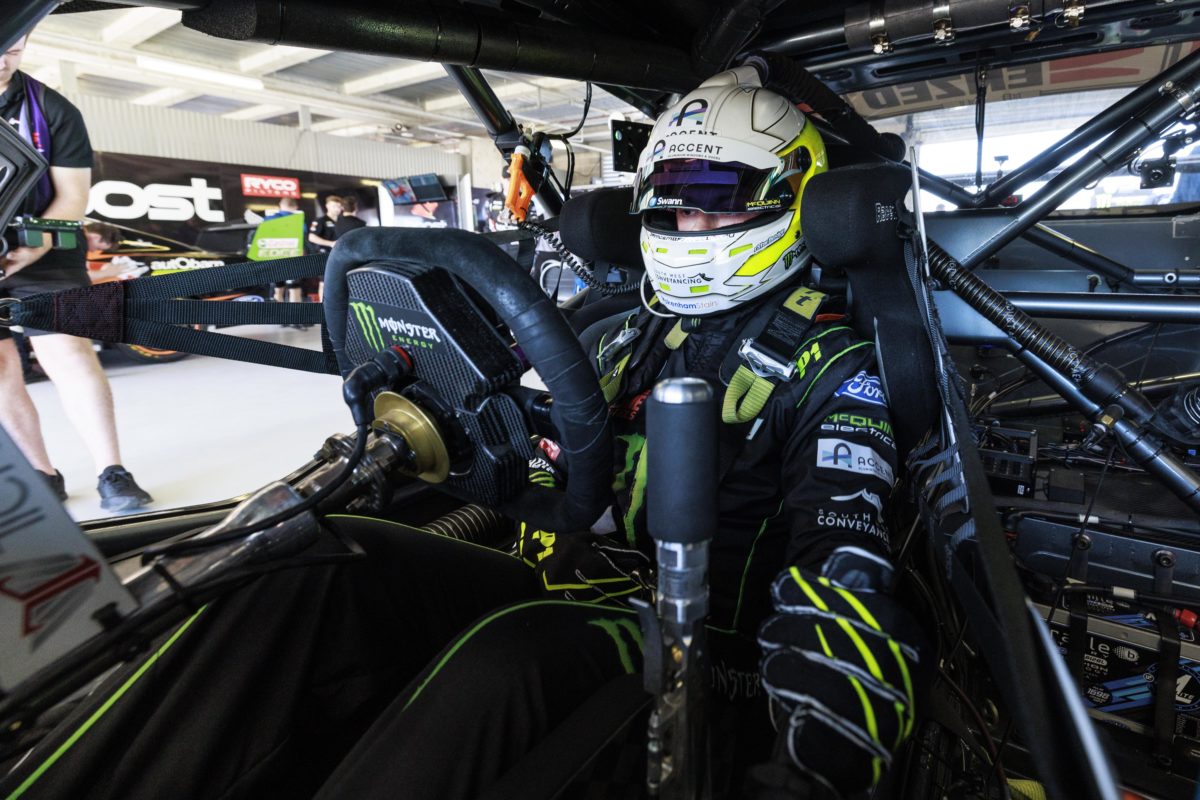 James Moffat in Cameron Waters’ Gen2-spec Tickford Racing Ford Mustang, with sequential gearstick by his side

Supercars has announced that the manual, sequential gear shift system will remain when the Gen3 era of competition begins next year.

The decision means that paddle shift and auto blip will not be seen in the championship when the Chevrolet Camaro and new-spec Ford Mustang debut in 2023.

Gear shifting has been one of the hottest topics in Supercars, for more than 12 months now, after a Gen3 electronics tender came to light in January 2021.

The revelation that the category was seriously considering a switch to paddles and auto blip created friction between the preferences of the majority of drivers and one of the key aims of Gen3, that being cost-cutting.

Fans, on the whole, also wanted to maintain the status quo, which requires drivers to change gears with a sequential lever and heel-and-toe on the downshift.

Now, it has been announced that they will have their wish.

“Supercars can confirm that the General Motors Chevrolet Camaro and Ford Mustang will continue to run using a purely manual sequential gear shift system when they hit the grid in 2023,” read a statement from the category.

“The fully manual gear change mechanism used on the six-speed sequential transaxle currently in the category will remain exactly as it is from 2023 when the Gen3 Supercars begin racing.”

It means that, rather than going to the electronic actuation which the prototypes had been built with, the mechanical system will stay.

According to new Supercars CEO Shane Howard, the Gen3 Steering Committee was “unanimous” in its stance.

“Following the early rounds of testing in the prototypes, and unanimous support from the Gen3 Steering Committee, I can confirm the Camaro and Mustang will race using the current fully manual gear shift for 2023 and beyond,” said Howard.

“We strongly considered the overwhelming feedback from our fans, teams and drivers that the gear change mechanism and the commensurate skill required to down change properly cannot be lost in Supercars’ unique heat of battle on-track.

“We have always celebrated the difficulty that comes with driving a Supercar. The shifting of gears has become part of the artform required to succeed in our category.

“We’re very happy with the decision of the Gen3 Steering Committee and can now move forward with further Gen3 development.”

As then-Supercars CEO Sean Seamer explained at last December’s Repco Bathurst 1000, when questions on the subject created a tense press conference, a final call on the gear change system was crucial with respect to engine development.

Among a raft of technical changes which will be implemented with Gen3 is a switch to production-based powerplants, replacing the existing 5.0-litre units which are relatively hardy but also more expensive.

Notwithstanding debates about relevance, it was engine life, and hence costs, which was a key factor behind the entertaining of auto blip and paddles.

The heel-toe down-change opens up the potential for damaging over-revs and, for much of 2021, it looked as though the art would soon be consigned to history.

As it turns out, drivers will still need to blip the throttle themselves, even when they are racing the new breed of cars in 2023.

Testing of the prototypes continues at Winton on February 22-23, when the southern-based Repco Supercars Championship and Dunlop Super2 Series teams are also set to be in action as part of their pre-seasons.

There will then be further Gen3 demonstrations at the Beaurepaires Sydney SuperNight, which takes place on March 4-6.