Marquez having to ‘sacrifice’ his style for new Honda MotoGP bike

Marquez having to ‘sacrifice’ his style for new Honda MotoGP bike 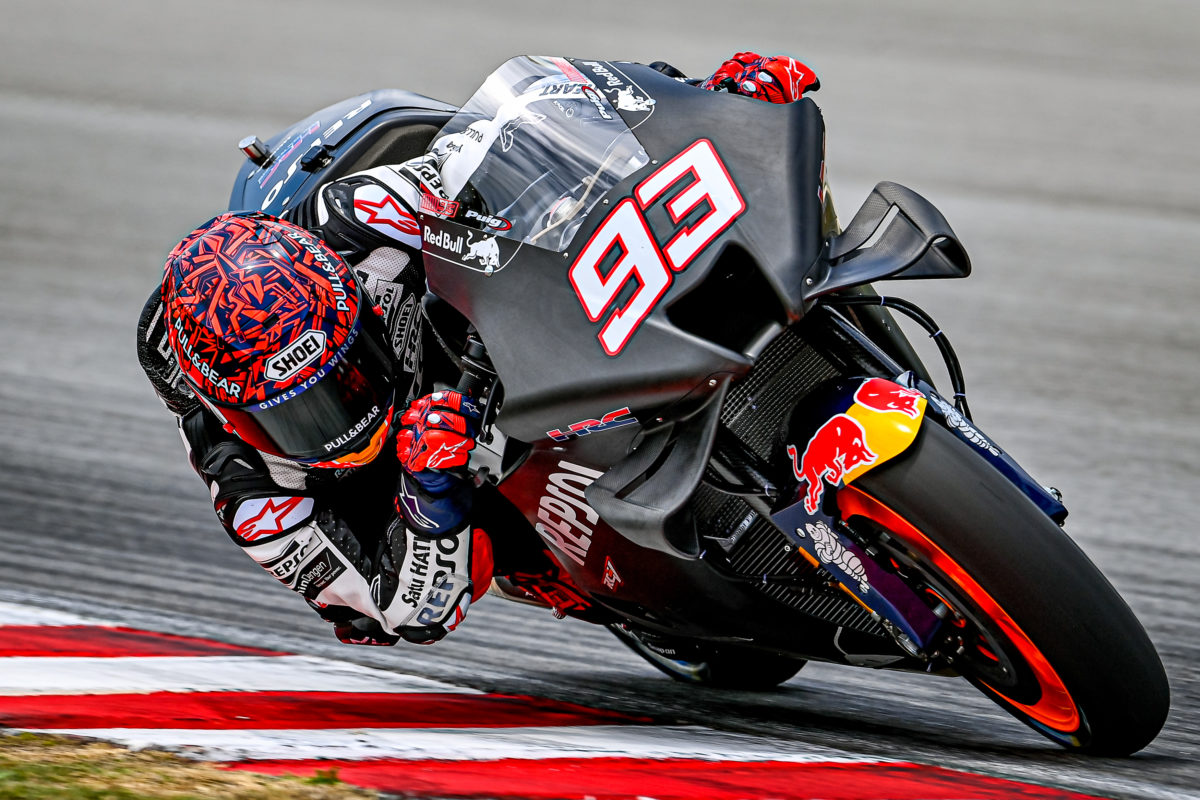 Marc Marquez says he is having to make “sacrifices” with his riding style to accommodate the new Honda MotoGP bike.

Day 1 of the Sepang Official Test represented Marquez’s comeback to MotoGP, after a motocross crash had kept him out of action since winning last October’s Emilia Romagna Grand Prix.

The eye injury meant he missed not only the final two rounds of 2021 but also the post-season test at Jerez, meaning the 2022-spec RC213V was a significantly different beast to get his head around when he rolled out in Malaysia for pre-season running.

The six-time premier class champion found the front end of the Honda to be a big change, and cited it as a factor in one of his two crashes during the day.

“The bike is different,” remarked Marquez after ending the day eighth on the timesheet at 0.916s off the pace, but first of the Hondas.

“Today I had last year’s bike too, and immediately I understood that the lap time is easier to get with the new bike. But this creates another problem of course, like always.

“One of the things that I must learn and understand is that the front feeling has changed a lot. For example, one mistake today was completely my mistake, and one time I crashed and I didn’t understand why, because I didn’t make anything strange.

“So, all these things plus a long time without riding a MotoGP bike created [a situation] where I still don’t understand well the way to ride this bike. The lap time was coming, but I don’t know why.

“Still with this bike we need to understand especially the set-up we have to use. Because the numbers we had in the past we have to forget.”

Marquez has become famous for his front-end saves, but says he cannot rely as much on corner entry to make lap speed.

“At the moment, I need to sacrifice that a bit,” he explained.

“Today when I tried this, I lost the front.”

The Spaniard suffered double vision when he came off his motocross bike last year after injuring the same nerve as that which he did in a Moto2 crash in 2011 at Sepang.

Fortunately, there were no such dramas when he went down on the first day of this weekend’s test.

“When I spoke to my doctor, it was my first question; If I crash in the Malaysia test, what is the possibility to create the same problem again?” noted Marquez.

“And the answer was clear; the possibility is the same that you will have in two years.

“The nerve problem is there. If you crash tomorrow or you crash in two years and you touch that nerve again, it will be damaged.”

Marquez also found his right arm to be improving, after battling with a lack of fitness last year following the 2020 Spanish Grand Prix crash which left him with a broken humerus.

However, he was still concentrating more on getting miles on a bike than development.

“Without riding a MotoGP bike for a long time, and especially not riding a lot this winter time – I rode the last two weeks, but not usually – the speed is there,” commented #93.

“I said to my team today, ‘Forget about the things, I need laps’, and we finished with the same bike we started with.

“We tested a few things, but not much. Tomorrow, if I feel ready, I will say I’m ready.”