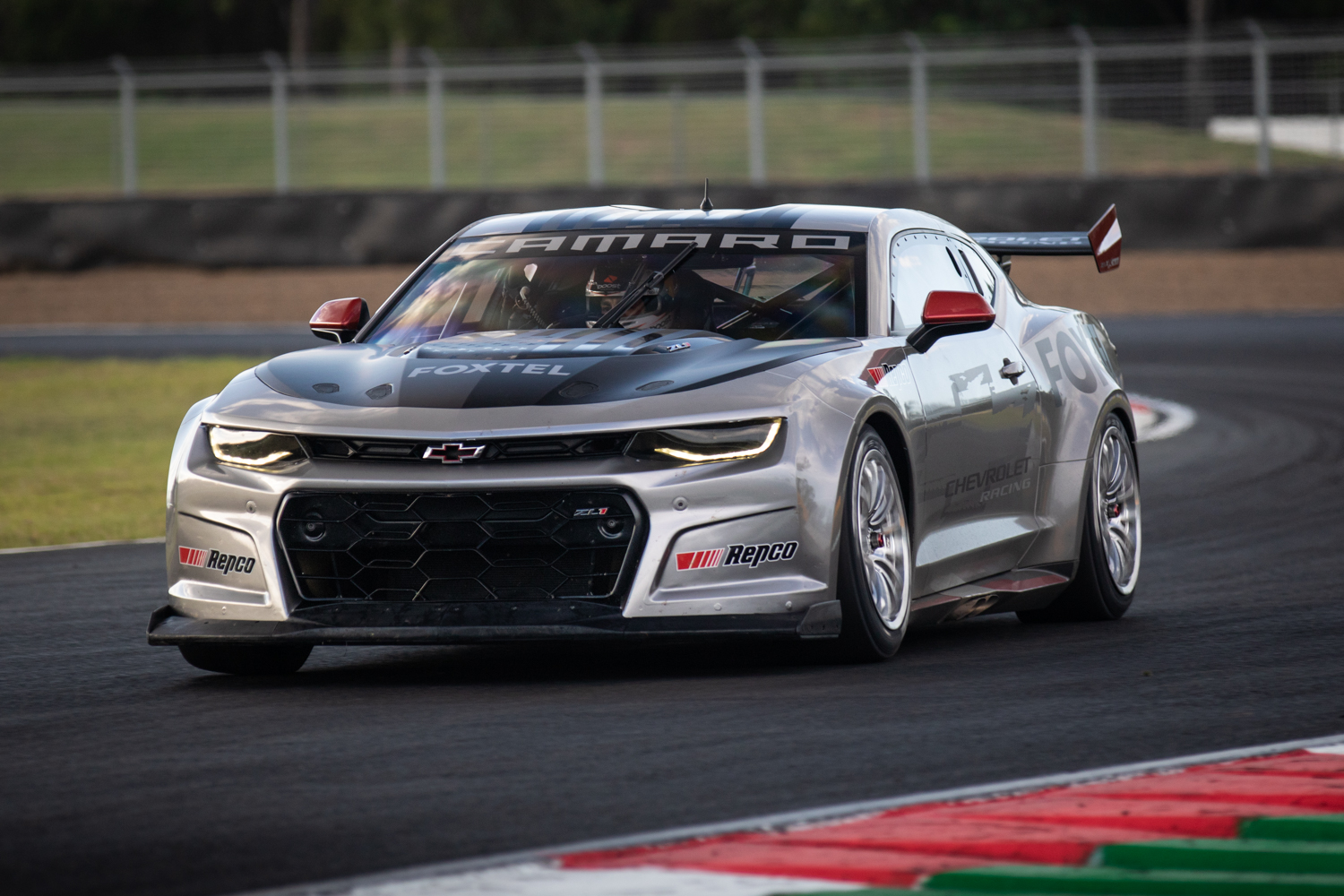 The Chevrolet Camaro ZL1 on track at Queensland Raceway

To date, the Triple Eight Race Engineering-run car has been fitted with a ‘hybrid’ engine using an LS-based block.

However, a test day earlier this week at Queensland Raceway marked the first time the final specification LTR block was used.

It’s expected the revised Camaro power unit will be tested again next week to see that torque and horsepower output levels haven’t changed.

Little has changed in the engine bay apart from the block and the addition of a carbon air intake in between tests.

The team tested two grilles, one from the road car and one which was 3D printed in-house by Triple Eight Race Engineering, to see what temperature differences there were between them.

Ultimately, little separated the two options, with just an increase in engine temp of two to three degrees celsius.

KRE Race Engines owner Ken McNamara told Speedcafe.com he was happy with how the day’s running played out.

“The initial one was the LS9-based engine; this engine is basically identical – same cylinder head, same everything – just a stronger [LTR] block,” said McNamara.

“We’re running a camshaft and trying a few little different things at the moment more just to match the curves with parity.

“We spent a little bit of the morning mapping and chasing a few things. We’re just chasing the driveability and then we’ve obviously got the restrictor and airbox on there now, which we didn’t have at the last two tests. That gives us the right air temperature in the engine now.

“It’s more just making sure nothing pops up that we didn’t see on the engine dyno and then I guess we’ll do a certain amount of runs, pull them out, re-dyno, see if there’s any degradation or power loss.

“We’re happy where power is, now it’s just a matter of getting the engines as close to each other and then seeing what parts wear out.”

The Redland Bay-based engine builder has been tasked with the development and production of the General Motors product.

Mostech Race Engines built and developed the Ford unit, though that programme has since been taken over by Herrod Performance Engines.

By and large, Camaro and Mustang power units are production-based, save for a few custom-made items which differ between the two.

“[The Gen2 engine] is about $150k by the time you get all the airbox, the manifold, all those sorts of bits and pieces, where these [Gen3 engines], we’ve got to make them about $60k to $70k,” McNamara explained.

“Once we buy things in bulk, we should hopefully keep the price down. We’ve just got to see the dollar, freight, and all this stuff going on.

“It’s really half the price and if we do the same mileage and hopefully get up to the 10,000kms, the teams, instead of having a $40,000 rebuild, it’ll be $25,000, once a year or twice a year instead of being three times a year. The running cost is where there’ll be quite a few savings.”