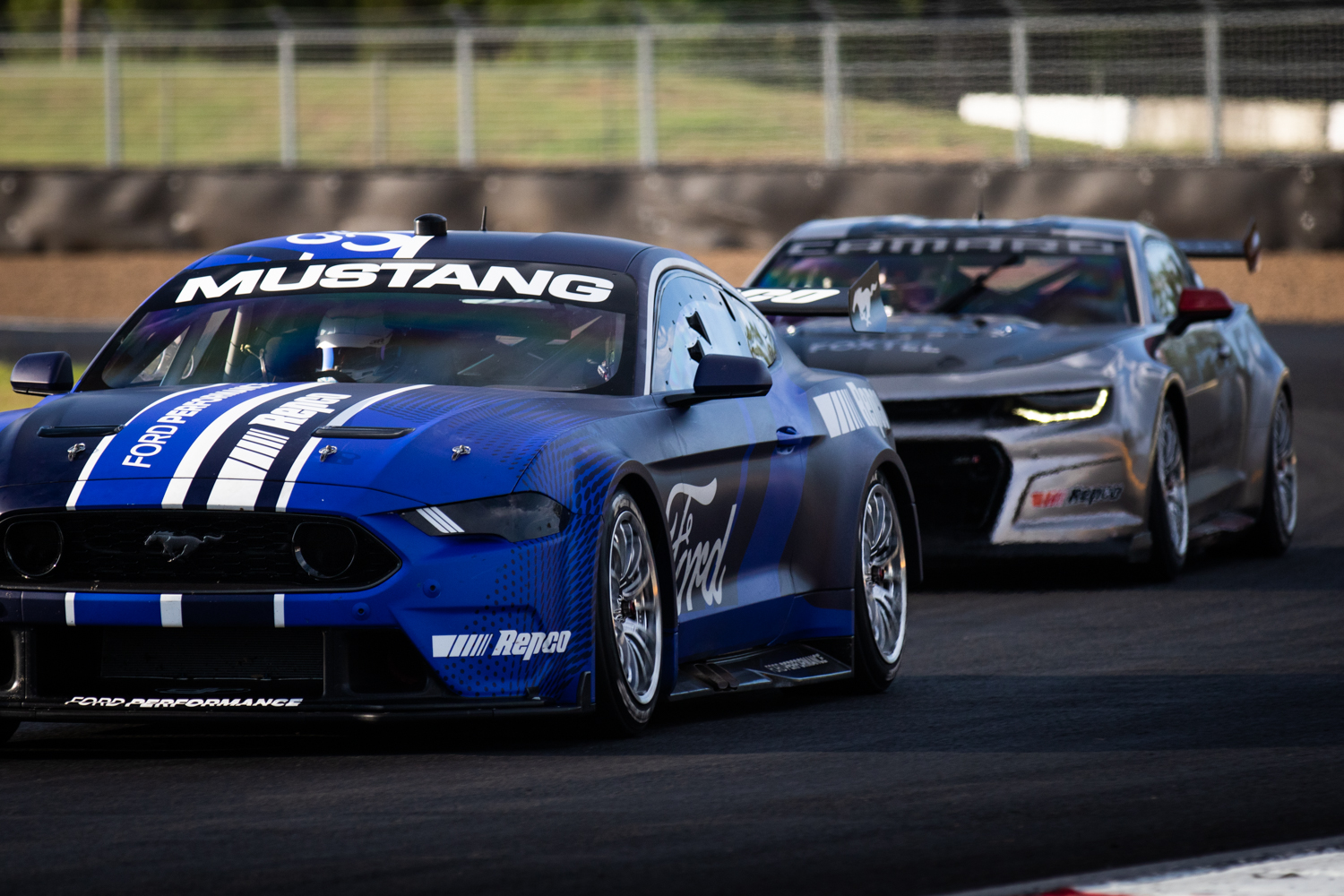 Supercars has taken one step closer to achieving one of its main objectives with Gen3 this week.

The third prototype test at Queensland Raceway yesterday saw the Chevrolet Camaro and Ford Mustang take turns following one another at the end of the day for the first time.

Although only a handful of laps were completed with the cars running nose-to-tail, it gave Supercars its first read of how the Gen3 cars behave in dirty air.

Supercars drivers have long bemoaned the incumbent Gen2 cars, which are prone to creating significant amounts of dirty air.

With the removal of under trays and the rear wing downsized significantly, it’s expected the Gen3 cars will create less aerodynamic washout for trailing cars.

Piloting the Mustang, Slade admitted he struggled to keep pace with Feeney in the Camaro owing to a few factors including car set-up and tyre life. Feeney, however, kept up with Slade.

Speaking with Speedcafe.com, Feeney was happy with how his car felt, although was conscious it’s still early days in the development of the prototypes.

“It was all positive from me,” he said.

“I definitely thought it was a bit better than our current [Gen2] cars.

“I don’t want to read too much into that because we weren’t on the same tyres, but it was good to run behind.

“I was making sure when I was out in front, the biggest thing was just keeping a close gap so we could get a feel for it.

“I think I maybe had some better tyres on and was getting a run so was slowing up to make sure he could get behind me into the corners.

“When I followed him, he was moving all over the shop, so it was a little bit hard to go 100 percent and see what it’s like, but I definitely think it’s heading in the right direction.

“I don’t want to mark my words too early, but I definitely think it’s better. It’s positive.”

Slade was nonplussed after the last run of the day.

The Mustang, which has been typically quite tail-happy during the three tests to date, was hard enough for Slade to tame let alone follow in the Camaro’s wake.

“I didn’t get a very good read,” Slade told Speedcafe.com.

“That was sprung on us mid-run. It was just hard enough trying to keep it on the track, let alone thinking about balance differences behind the other car.

“That thing [the Camaro] seemed to get off the corners better anyway, so it was a bit hard to judge.

“You’re not going to get an idea of what it’s like until you do a full race simulation anyway.

“It’s not NASCAR, we’re not running around at a constant speed. Our race situations are very different to what you do with one or two cars on a test day.”

As yet, the aerodynamic balance of the two prototypes hasn’t been audited by Supercars via the Vehicle Control Aerodynamic Testing (VCAT) process.

That’s not likely to come until late in the piece when Ford debuts its next-generation Mustang model S650 later this year.

Feeney said he’s eager to sample the cars in their final form.

“It was cool to do some laps out there, but it’ll be even better when we go out and have a proper race run together and see what the cars are like,” said Feeney.

“The teams are working as hard to make sure that the cars are best prepared.”

Gen3 testing will continue at Queensland Raceway on Friday.