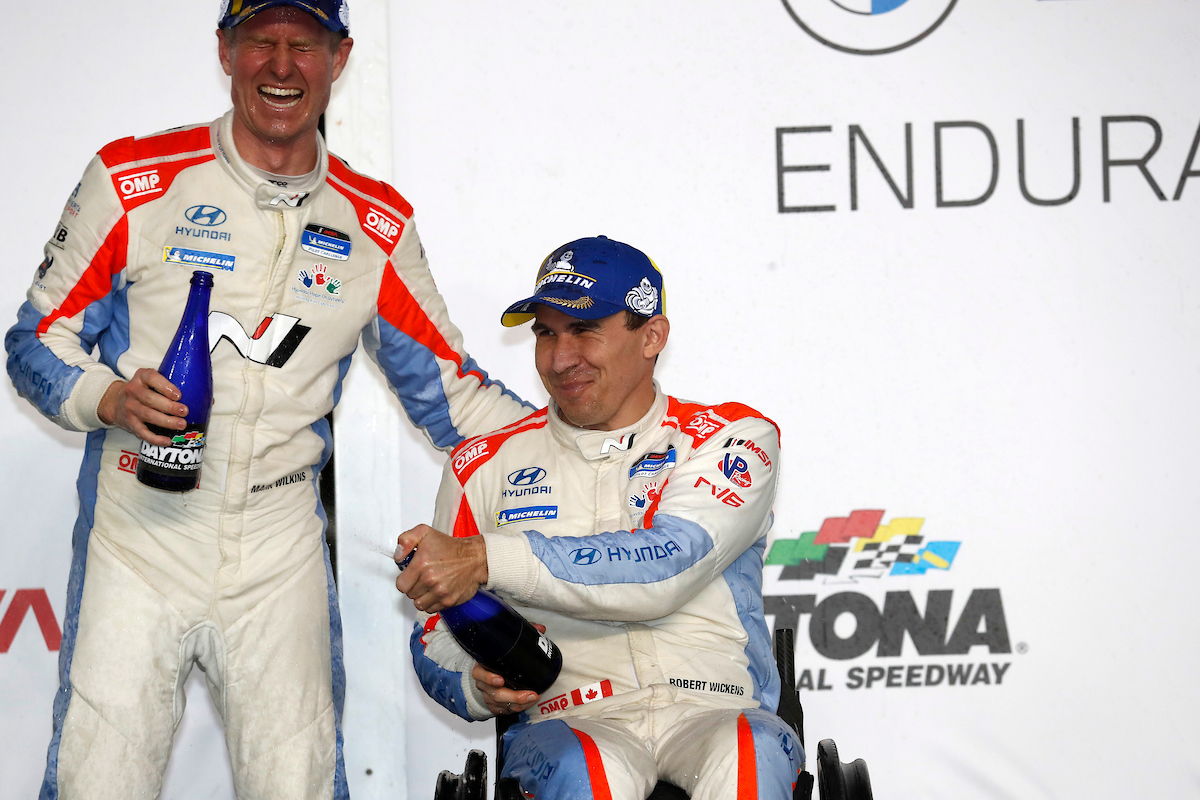 Mark Wilkins (left) and Robert Wickens celebrate on the podium

Robert Wickens has claimed his first podium finish three and a half years on from his near career-ending IndyCar crash.

Wickens, who was involved in a terrifying high-speed incident at Pocono Raceway in 2018, made his return racing this weekend at Daytona International Speedway.

Competing in the IMSA Michelin Pilot Challenge, the paraplegic drove a Hyundai Elantra TCR with modified hand controls to third in the opening race of the season.

Along with fellow Canadian Mark Wilkins, the pair claimed third in the TCR class for Bryan Herta Autosports.

The TCR race win went the way of Tim Lewis and Roy Block in their Alfa Romeo Giulietta Veloce for KMW Motorsports with TMR Engineering.

Michael Lewis and Taylor Hagler were second for Bryan Herta Autosport in another Hyundai Elantra.

“I was so excited to spray champagne, I just felt like celebrating, but then I realised ‘I can’t move because both my hands are on the champagne bottle’ and that’s not fair,” Wickens told AP.

“But I wasn’t complaining. And I got quite a bit.”

Wickens was a revelation in his debut IndyCar Series, claiming pole position in his first race at St Petersburg only to be involved in an incident in the closing stages which starved him of a win.

A podium would be forthcoming in the following race at Phoenix Raceway and again at the Indianapolis Motor Speedway road course.

Wickens continued his strong showing for Schmidt Peterson Motorsports (now McLaren SP) with podium finishes in Toronto and Mid-Ohio before the untimely crash.

Despite the spinal cord injury, Wickens was determined to walk again. Although he is still wheelchair-bound, Wickens can now stand with some support.

Thank you @BHA, @Hyundai, Karli and everyone who has supported me through this journey.