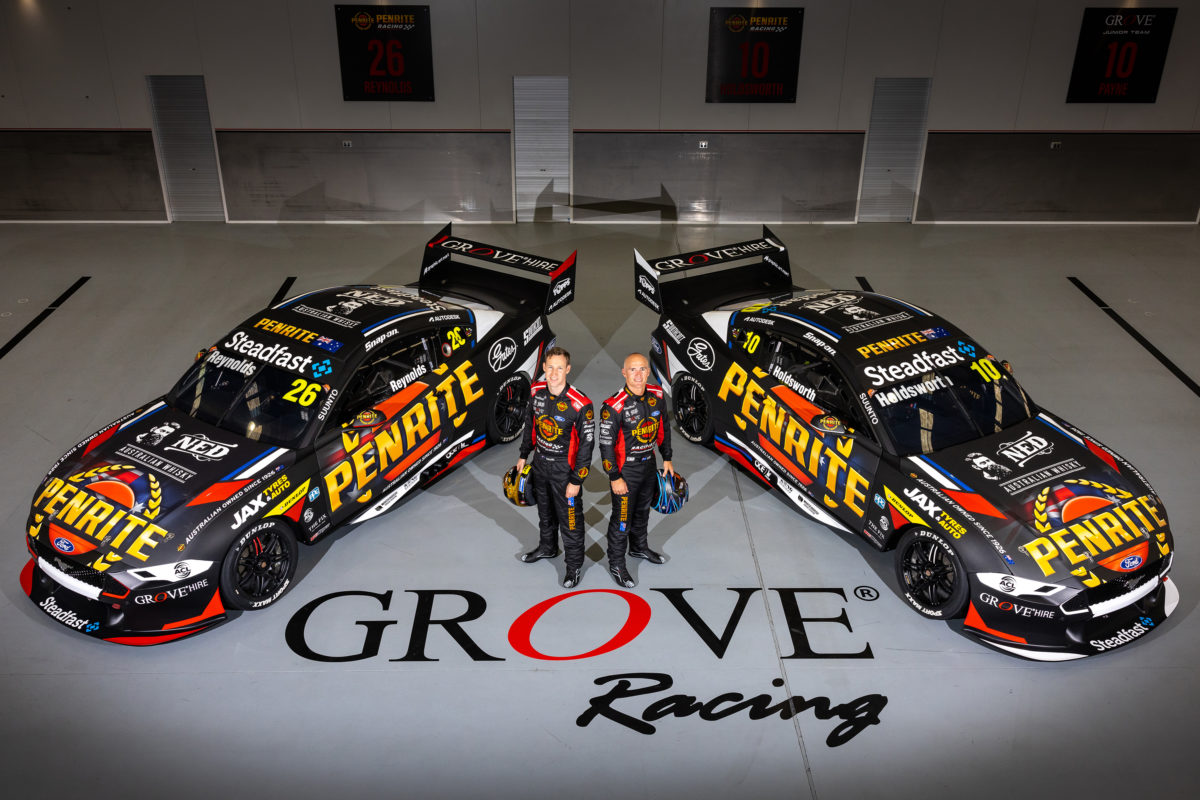 Grove Racing has attracted naming rights sponsorship from Penrite for both of its Ford Mustangs for the 2022 Repco Supercars Championship.

The oil company was major backer just for David Reynolds’ car last year, but an expansion looked on the cards based on imagery released in conjunction with the December announcement of 2021 Bathurst 1000 winner Lee Holdsworth as his new team-mate.

That commitment now been confirmed, as has the team’s new commercial identity as ‘Penrite Racing’.

Holdsworth and Reynolds were joined for the Australia Day announcement by legendary former Australian Rules footballer Sam Kekovich, a figure who has become synonymous with the January 26 public holiday as a result of the annual lamb advertisements.

“To have an iconic Australian brand like Penrite to be a part of Grove Racing’s first full year at the helm of our Supercars team is fantastic,” said team owner Stephen Grove.

“Penrite is a well-respected Australian company who Grove Racing have worked with in 2021 and for them now to step up to support both of our cars is a great opportunity for our team to assist in growing the Penrite brand. We are truly excited for the year ahead.

“Like the Grove Group, Penrite is a family-owned Australian company that shares the same business values and there are strong synergies between our two organisations.

“Like all Supercars team, we want to win, and that will always be the aim, but first and foremost, we want to continue to grow, develop our Ford Mustangs and work our way up the grid.

“This year is about moving forward, improving the business, advancing the team and creating a sustainable and competitive future.”

Penrite Oils’ general manager of sales and marketing, Toby Dymond, remarked, “Penrite is a proudly Australian family-owned business and we could not be happier to partner up with a like-minded, locally-owned Supercars race team.

“Australian manufacturing is very important to Penrite, so to be in a position to increase our support of a self-sufficient Supercars team like the Groves in a dream relationship.

“It is fantastic that we are continuing our long association with Supercars, and with our driver David Reynolds who is regarded as one of the best in the business.

“And now to have reigning Bathurst 1000 winner Lee Holdsworth in our team and in our colours, we feel very fortunate, and we can’t wait for the season to start at Sydney Motorsport Park.” 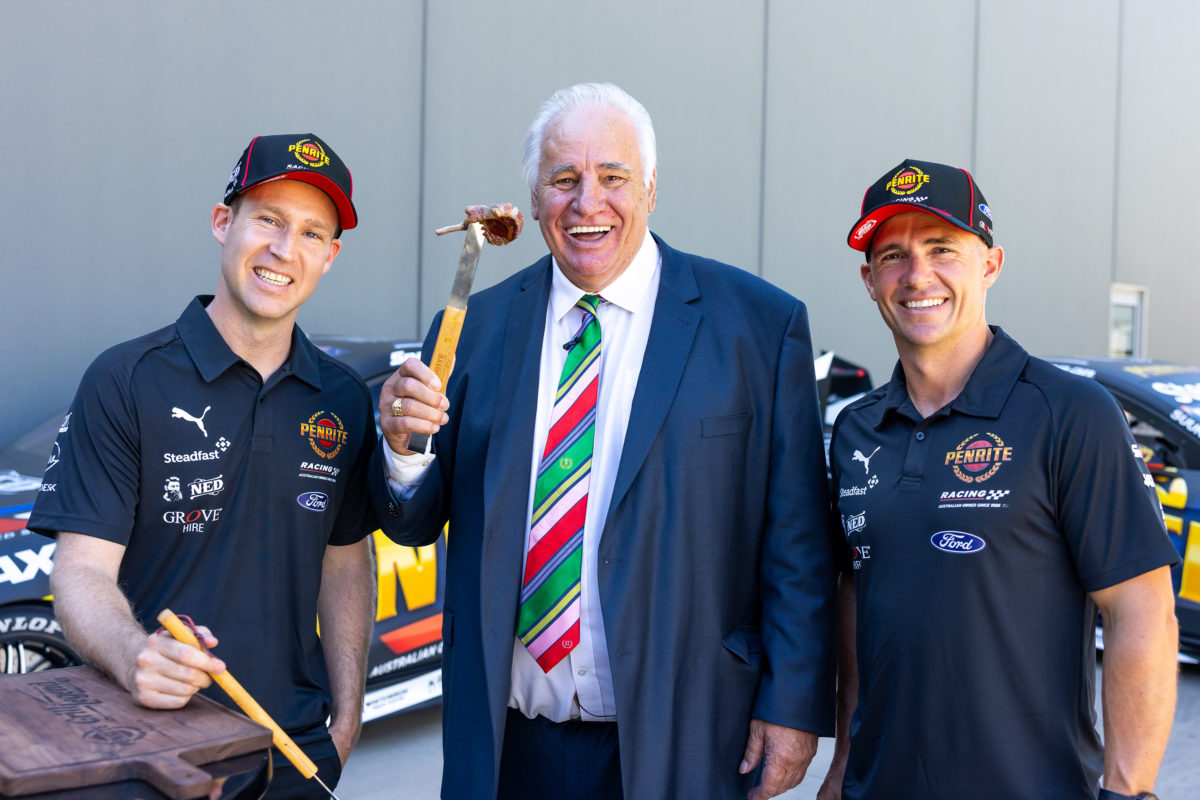 Reynolds will continue to race Car #26, a reference to Penrite’s foundation in 1926, while Holdsworth takes #10, a number used by the Groves previously in other competitions, as well as briefly during the team’s Nissan Motorsport era.

“It’s an exciting day for us, launching our 2022 Grove Racing livery across both Ford Mustangs,” said Reynolds.

“We’ve got the same sponsor in Penrite, which is fantastic for our team, I’ve got a new team-mate in Lee Holdsworth who I’ve known for a very long time, so I’m glad he’s joining and he’s going to be part of our journey this year.

“This is the first year under full ownership of the Grove family, which is good to have fresh blood in this team.

“Our hopes and dreams for this year would be for more wins and pole positions, we’ve got some new crew members coming onboard, new parts being built, so there’s a lot of excitement in the group.

“It’s awesome to have Penrite’s support this year. It is the most fantastic brand to deal with. Being Australian owned and manufactured is a great fit to launch on Australia Day.

“I’ve known him for a very long time, but I’ve never actually worked alongside him, so it’ll be interesting to see how he conducts himself, drives the car and gives feedback. I’m very, very excited to have him.”

Holdsworth takes the seat which had been tentatively assigned to Grove Junior Team driver Matt Payne, who will remain in the Dunlop Super2 Series for another season.

“This season is very exciting,” said the man who won the Great Race in his most recent start, as Chaz Mostert’s co-driver at Walkinshaw Andretti United.

“We’ve got two Penrite Ford Mustangs behind us, which is great, I’ve got Dave as a team-mate and we have plenty of things to look forward to. I think this team will really step up a notch this year and achieve some great results.

“Dave and I have known each other for a very long time and raced each other a lot. We have a lot of respect for each other and a great friendship, so it’ll be cool to link up.

“I hope our experience combined will push this team along and we can strive towards the results that the Groves have as their goal.

“Penrite is an Australian brand, so it’s great to launch on Australia Day. They are very cool colours, the Australian flag is featured just behind the Penrite branding, so it’s a great day for it and it will be good to have it on track this year.

“It’s hard to set an expectation at this stage, but I think everyone aims to be in the top 10 first and foremost, but we’ll take it from there.

“I’m looking forward to stepping into the car to see what it’s like, the potential it has and we’ve got some good additions coming on this year with the engineering crew working hard to produce new parts to make these Mustangs go faster to be in a position to challenge for race wins.”

The team officially came under full Grove family ownership in December, after competing in 2021 as Kelly Grove Racing.

It will test at Winton Motor Raceway on February 22, ahead of the season-opening Beaurepaires Sydney SuperNight on March 4-6.