WithU Yamaha RNF MotoGP Racing has shown off the colours it will compete with in its first MotoGP season.

RNF morphed out of the SRT (Sepang Racing Team) outfit which gave 2021 world champion Fabio Quartararo his start in the premier class, and will field veteran Andrea Dovizioso and rookie Darryn Binder in 2022.

The Razlan Razali-led squad’s look has now been shown off at the Verona Philharmonic Theater, revealing a YZR-M1 with a black base and the blue and orange hues of Italian energy company WithU.

“This presentation in this beautiful backdrop settings of Verona signifies a number of things for the team; firstly, we are rebuilding, rebranding and with the riders that we have engaged for this year, Andrea Dovizioso and Darryn Binder, the target is to become competitive, surprise everybody, and do the best we can in achieving our goals,” said Razali.

“Secondly, for the first time, WithU is the title partner for a MotoGP team.

“WithU has been with us [as SRT] since 2019 and we appreciate their continued commitment, Matteo Ballarin’s [Brand President] support, trust, and confidence in us in this new journey for the next three years.” 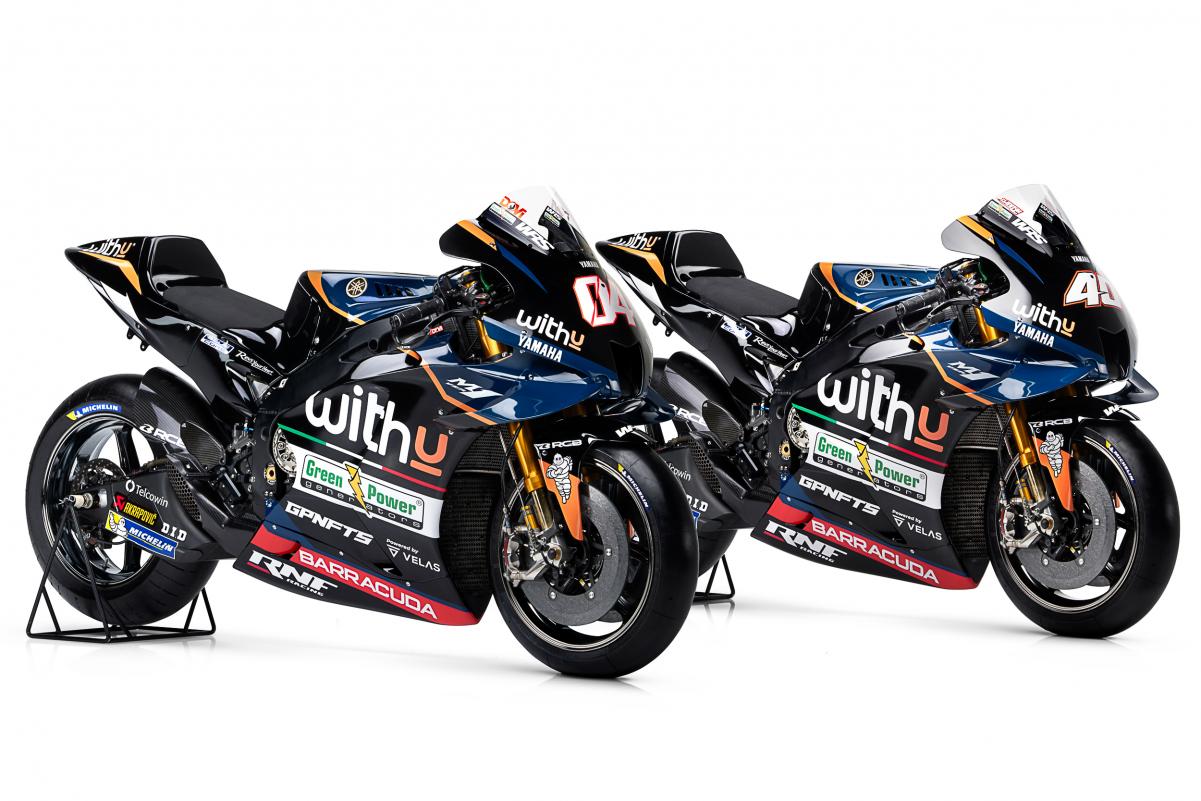 Team manager Wilco Zeelenberg added, “I’m very excited to start the 2022 season with a new chapter for the whole group.

“We closed the old one, but closing chapters always means opening new episodes and to start this new project with the RNF team is of course again a huge challenge.

“A big part of the group remained, some people of the crew, especially on the side of Darryn, are also new.

“We’ve got a new crew chief, a new data engineer, and new mechanics. We have new material, a new hospitality, new trailers, so we will replace a lot, but at the same time, a lot will remain.

“We’ve got two new riders, one experienced rider with Andrea and a rookie with Darryn, which is something we have been doing before, but each season is a new challenge.

“Yet, we are looking forward to it.

“The bike looks very nice, although we know it’s not just about the glance. We’ve created a nice balance with colours and we can’t wait to start the 2022 season.”

Dovizioso returned to MotoGP last year as part of the protracted Yamaha shuffle which saw Maverick Viñales ousted over the Red Bull Ring engine episode and Franco Morbidelli moved from SRT to the factory team.

The former Ducati rider goes from an upgraded 2019 YZR-M1 for his five races with SRT to the latest-spec Yamaha this year while Binder, who moves straight up from SRT’s Moto3 team, will ride a year-old bike.

Coincidentally, RNF’s bikes will be numbered in a reverse of each other, with Dovizioso using his trademark #04 and Binder #40.

The latter, as a MotoGP rookie, is eligible for the Shakedown Test at Sepang on January 31-February 2, while Dovizioso is set to return to action in the Official Test at the same circuit on February 5-6.