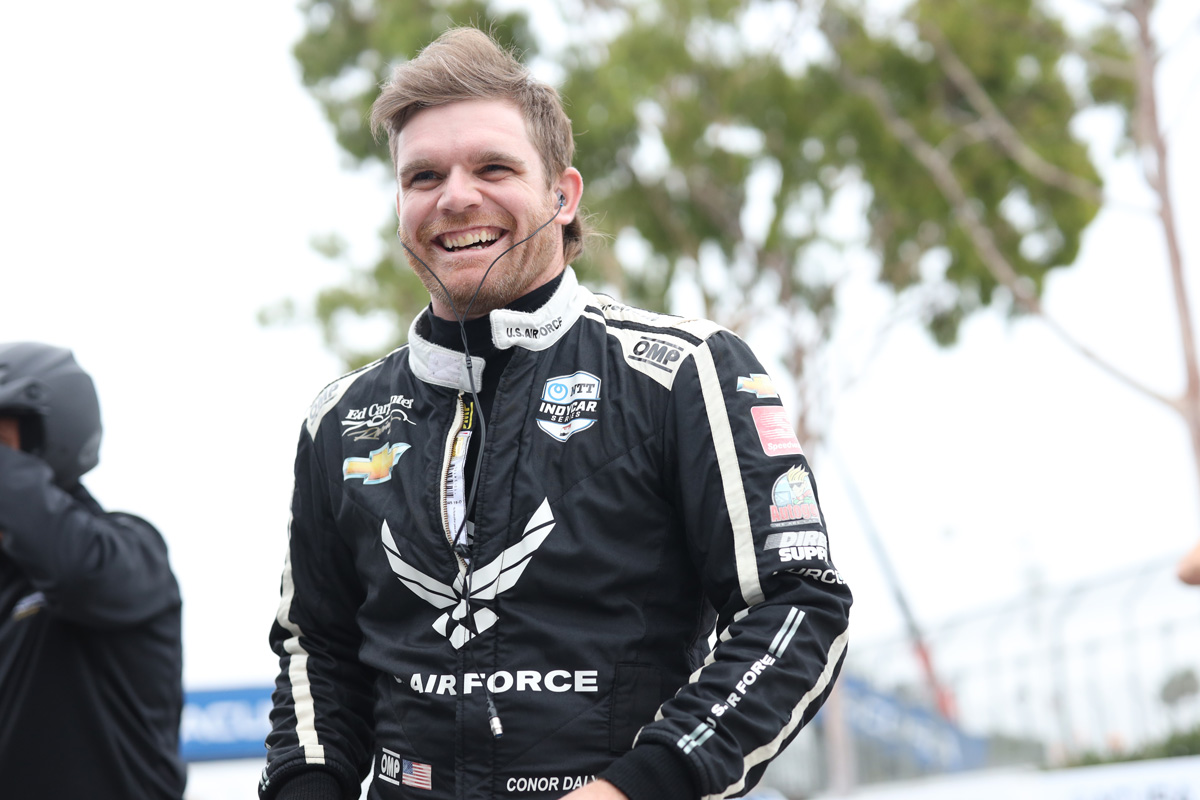 IndyCar Series journeyman Conor Daly has recounted how a trip to Las Vegas to celebrate his birthday ended up reviving his racing career.

Daly, who recently turned 30, has been in and out of the IndyCar Series since making his debut in 2013.

The Indiana native looked unlikely to be a full-time fixture on the grid in 2022 until a discussion with a long-time friend led to a chance meeting with a prospective sponsor.

As he recalled, it was a whirlwind weekend.

“This truly is a very Conor Daly-type story, how this all came about,” the eight-time Indianapolis 500 starter said.

“Everything kind of seemed to be going the wrong way, all of our deals we were working on were kind of pitter pattering out.

“I planned a 30th birthday trip to Las Vegas. At the time I had talked to a long-time friend of ours, both me and Doug [Boles, Indianapolis Motor Speedway president] knew him as well.

“He had this idea for this meeting with this guy that was interested in racing, IndyCar racing. I was like, ‘You know what? Happy to do it’.

“I went out there with me, Alex Rossi and two of my other friends from Indy here, and Travis Pastrana met us out there as well.

“We woke up Saturday. My friends, they were still celebrating. I was not. I was locked in. I was sweating.

“I go to this meeting at like six o’clock in the afternoon. By the next hour and a half we shook on a deal. I was like, ‘Wow, that was the craziest thing’.

“After that I went back and shouted at Travis and Alex, my friends, ‘I think I’m employed!’

“We had an incredible next two days.”

Daly texted Carpenter that night to let him know a deal was done, much to the team owner’s surprise.

“Yeah, incredible story. It was wild. People always say, ‘Conor, you spend too much time in Vegas’. I was like, ‘Guess what? Got me a job this time, you losers,” he joked.

“It was great. Worked out well.”

It will mark the first time since 2017 that Daly has had a single car to himself for a season.

In the wake of the new deal, Daly said he and those around him are still coming to terms with the reality he’ll be full-time again.

“Since the announcement people every day are asking, Are you doing Indy? I’m like, What part of the full season is not the Indy 500? It’s really funny to see,” said Daly.

“It’s just hard for people to disassociate Ed. Even me, Yes, I think I’m doing the full season.”

Carpenter himself will vacate the #20 entry for Daly, who will carry backing from investment firm BitNile Holdings.

“They want to do an incredible amount in IndyCar,” Daly said of his new sponsor.

“They love IndyCar. Todd [Milton “Todd” Ault III, BitNite boss] has been an IndyCar fan for a long time, which is really, really cool.

“Obviously we love the people that support our sport, right, which is really cool. Now he wants to get directly involved.

“We’re going to try to really blow this programme up, have an incredible time with it, make sure we do the business that we can do for him, give the support that he’s given us for him and his companies.”