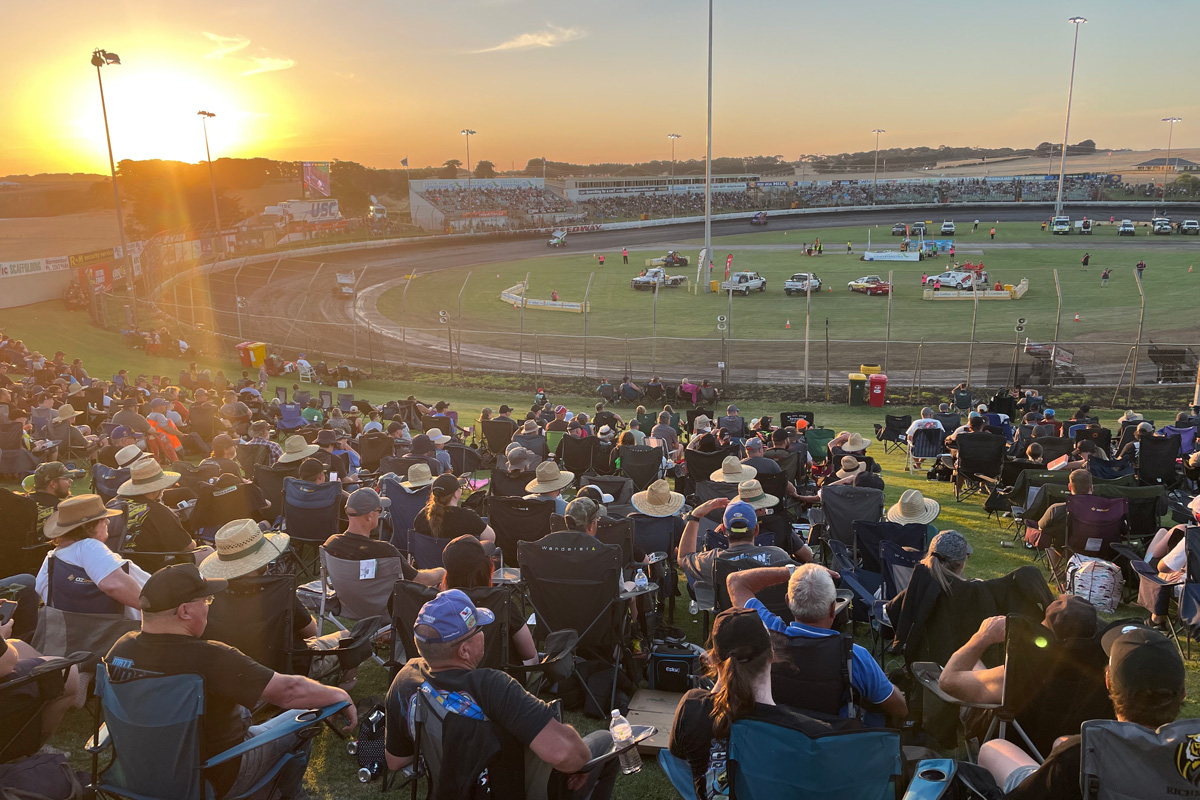 A crowd flocked to Premier Speedway at Warrnambool

Grant Anderson held on in a grandstand finish to take night two honours, in what’s being called one of the most thrilling feature races in Grand Annual Sprintcar history.

The Albury veteran won in a photo finish in front of a packed crowd at Warrnambool’s Premier Speedway – holding off a barnstorming Marcus Dumesny and defending champion James McFadden.

The final margin between first and second after a brutal 30-lap feature was just one tenth of a second.

Even more remarkable, just one second separated the top four of Anderson, Dumesny, McFadden and Grant Stansfield at the chequered flag after a pulsating final lap.

“It was a hell of a show and a hell of a race and one hell of a finish,” Anderson said following the $10,000-to-win Saturday feature.

“Starting from fifth I was able to watch where McFadden was going – and in the end wherever he went I went the other way to get it done!”

Anderson upstaged McFadden, the 2021 World of Outlaws rookie of the year, who is the red hot favourite for a third Classic this weekend.

McFadden had earlier set quick times, won both of his heat races to start from pole, and controlled the first 19 laps of the final before making an uncharacteristic error to lose his lead.

“Bugger… I’m not too sure what happened,” McFadden said after making contact with the Turn 4 infield tyre.

McFadden’s error allowed Anderson to pass as they fought their way through heavy traffic.

Dumesny was the wildcard – storming through from eighth on the grid, he also passed McFadden and then went within a whisker of pinching the win on a chaotic exit of Turn 4 on the final lap.

“So close yet so far! I thought I had him there at the end!” Dumesny said.

He started 16th and finished 14th.

After splitting the bumper field across the first two nights of the event, Sunday will see a final round of heats for all competitors, plus D, C and B-mains to set the field for the 40-lap final – the biggest prize in Australian speedway.