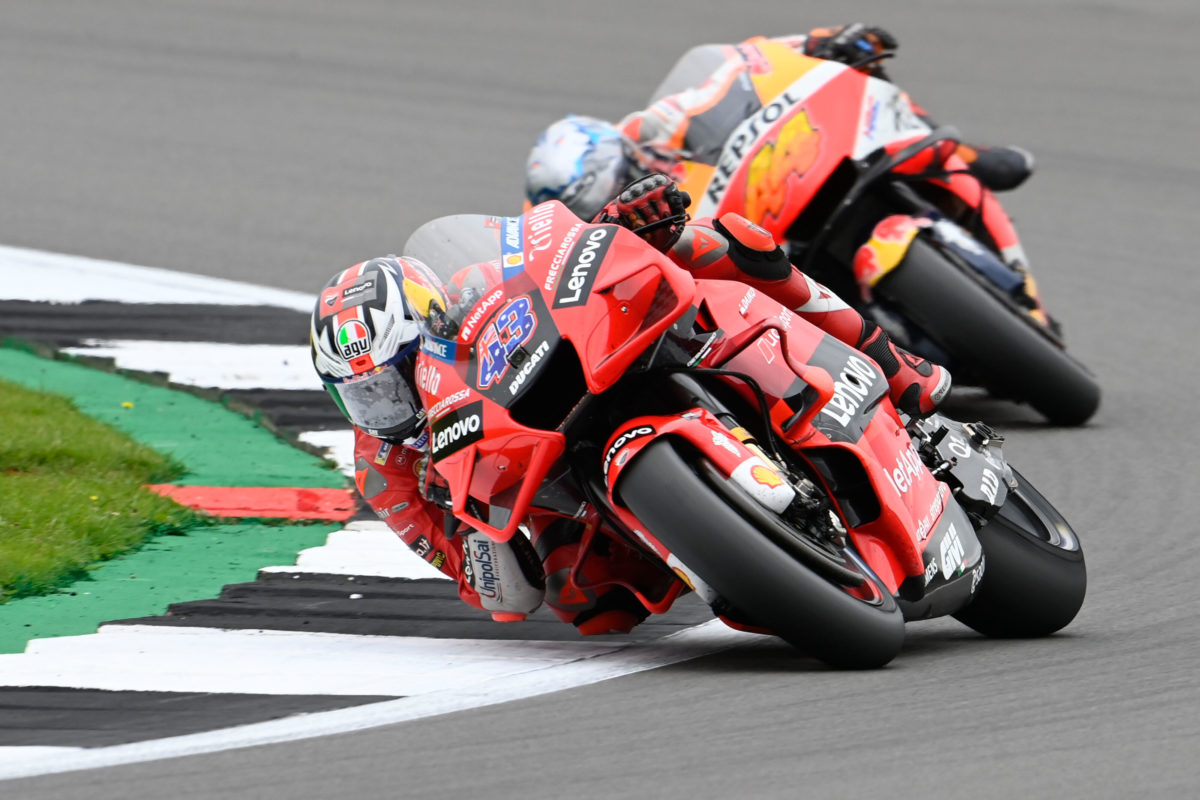 Pol Espargaro believes that Honda will need more horsepower this season if it is to be competitive in a MotoGP field which includes eight Ducatis.

The ‘Bologna bullets’ which the likes of Jack Miller and Francesco Bagnaia ride have come to be widely regarded as the best bikes on the MotoGP grid, whereas Honda has been exposed in the last two years by Marc Marquez’s struggles with injury.

In 2022, there will be even more Desmosedicis in the field, across the Ducati Lenovo Team, Pramac Racing, the Mooney VR46 Racing Team which essentially replaces Esponsorama Racing, and the Gresini Racing team which was most recently Aprilia’s factory effort.

Although not all will be current-spec, that fleet represents two more bikes which will have big straight-line pace.

Many a time, a Ducati rider has been overtaken in a corner, only to blaze back past when they open up the throttle, a point alluded to by Espargaro when speaking about the 2022-spec RC213V.

“What we ask for, the grip was something important for all of us, but also we have seen in the past years the Ducati is super strong on the straights,” noted the Repsol Honda Team rider.

“So, if we want to do a good season this year, more Ducatis are going to be on the grid, so it means we need to be faster on the straights to try to fight with them to get positions back or even to defend them.”

Round 1 of the 2022 season takes place at Qatar’s Losail International Circuit, a venue which suits the Ducatis given the length of its main straight.

Power, however, is not everything, as last year’s two Losail rounds proved.

While Bagnaia took pole for the Qatar Grand Prix and Pramac’s Jorge Martin for the Doha Grand Prix which followed a week later at the same track, it was Yamaha which won both of those races, courtesy of Quartararo and Maverick Viñales.

Then, it was believed that the Desmosedici riders could not use full power for the duration of the race or they would run out of fuel.

However, after Ducati locked out the front row and podium at the Valencia Grand Prix which served as the curtain-closer for 2021, Suzuki’s Joan Mir is fearful.

“[In 2020] I was able to see that when they started with all that power, it was massive,” noted Mir.

“But then at the end of the race, they were struggling to turn the bike a bit more than us and also on acceleration when the tyre was getting more used; it’s logical that when you have more power, you use the tyre more.

“[In 2021 at Valencia], I didn’t see any loss of performance in the last laps; for me, it was the opposite. They are even stronger on the end of the race, so it’s not easy to understand.

“I don’t see any weak points, and this is something that I’m worried about. And they are able to be fast with a lot of different styles.

“So, we have work to do if we want to fight again [this] year, because for sure they will be really strong.

Naturally, Bagnaia and Miller will ride the GP22 this year, as will Pramac’s Martin and Johann Zarco, as well as VR46’s Luca Marini.

Bastianini proved last year, however, that an older Ducati is not necessarily an impotent machine, having ridden a GP19 to podiums in both Misano races.