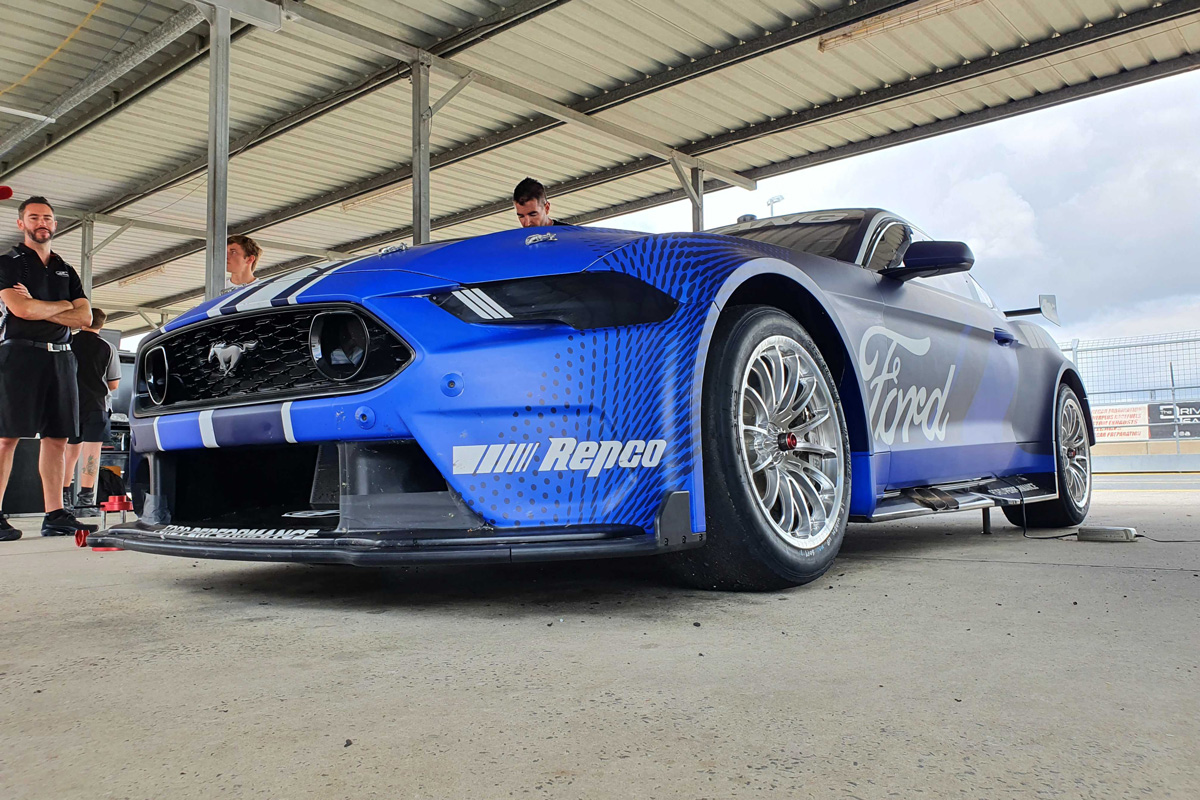 Hard, fast, punishing and loose. That’s the assessment from Will Davison after his first day driving the Gen3 Ford Mustang in anger.

Monday marked the first time Supercars had tested its prototypes this year at Queensland Raceway after an initial shakedown late last year.

Both cars ran without much trouble, a brake lock-up and trip through the gravel at Turn 3 for van Gisbergen the only incident of note on the day.

Although Davison drove the Mustang at the Bathurst 1000 in demonstration laps, this week’s two-day test was the first time he had pushed the performance of the car.

Asked by Speedcafe.com for his first assessment of the Mustang, Davison replied, “Harder to drive, more punishing.

“You’ve got to be quite particular the way you drive the car. The grip level is very low and the power comes on very aggressively.

“It’s exciting, you can’t be lazy, you get punished if you’re too aggressive with the car. It’ll implement more mistakes, but I’m all for that.

“I’m all for bigger braking zones, I’m all for more power again. I reckon we should have another 100 horsepower, where you can’t look after your rear tyres to save yourself. That’s me, I love it.

“The engine does have some cool characteristics and there’s just some refinement required and then it will be mechanically very critical to get a balance in the car.

“That’s what’s going to be the biggest trick for the teams to get their head around.”

As expected, the Gen3 prototypes cut lap times slower than their Gen2 predecessors.

Davison said he noticed the reduction in downforce. That was especially evident through the high-speed right-hand first turn.

“You feel you’re having to manhandle the car a lot more. You’re on eggshells quite a lot.

“Just the overall grip is generally down. You definitely feel the car sits on top of the road a lot more, moves around a lot more.

“It’s quite fun. There’s a lot of corrections in the car. You’ve got to be very particular about the way you drive it. It’s a beast. It is. It does put a smile on your face.

“It’s not what we’re used to. It’s all foreign and wild. It’s very raw. I’m sure we can evolve it a bit, but we’ve got the basic concept.

“It’s a very hot day out here today and for sure, you get a lot of muscle memory in these cars, and all of a sudden it doesn’t do what you’re used to.

“When I say a handful, I don’t think a handful is a bad thing, to be honest. We will be able to get the balance a lot nicer.

“But yes, the cars are going to move around a lot more and I think that’s cool, I’m all for that. I’m all for having an animal, to a certain degree.

Testing is continuing at Queensland Raceway today with Davison and Goddard behind the wheel of the Mustang.

Feeney will drive the Camaro in the morning before Erebus Motorsport’s Will Brown has his first laps of the track in the prototype this afternoon.