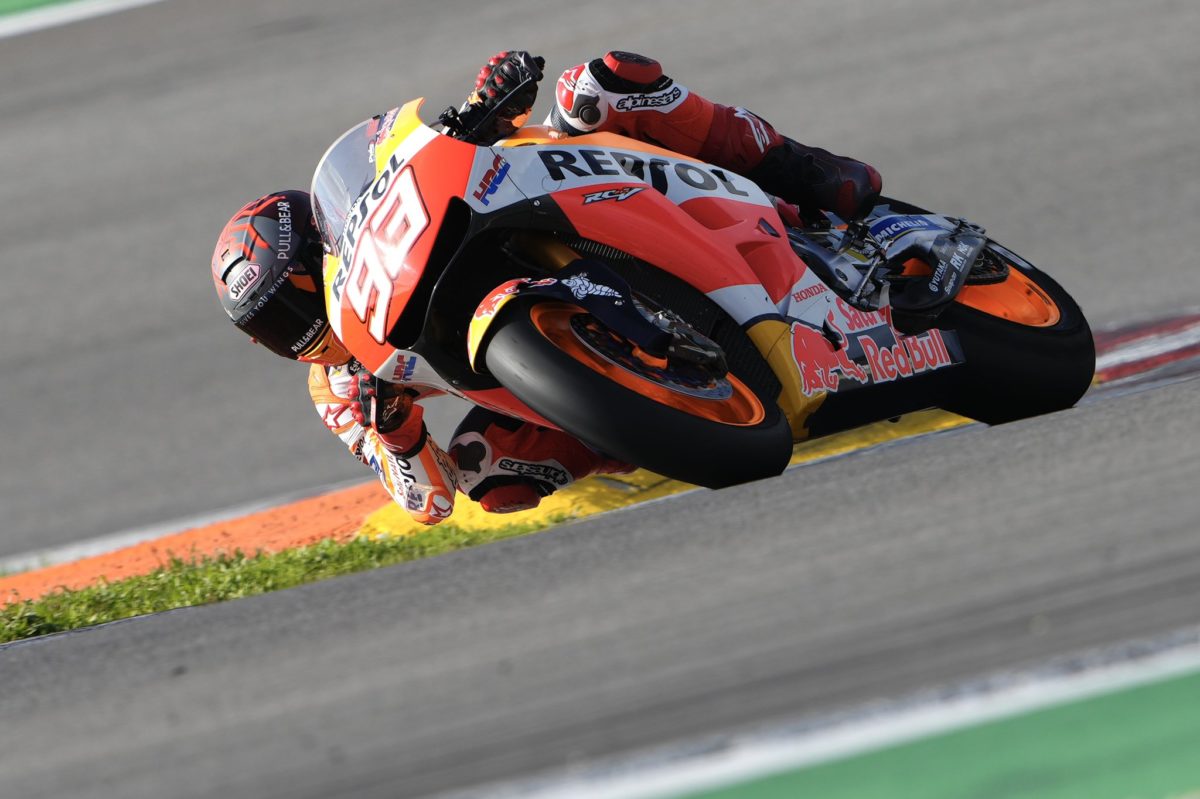 Marc Marquez has taken the next step in his recovery from injury by riding a Honda which is derived from his MotoGP bike at Portimao.

The six-time premier class champion missed the last two races of 2021 and post-season testing after a crash while training left him with vision problems.

However, he was allowed to ride a motocross bike again around a week ago, and subsequently explained that he could be cleared to get back onto a MotoGP back after a successful track day on a high-end production bike.

According to social media posts published by Marquez himself and his Repsol Honda Team, he rode an RC213V-S at the Portuguese Grand Prix circuit.

“[Marquez] is back on track riding the RC213V-S as he continues to further assess his condition ahead of the 2022 season,” announced the factory Honda team.

Out for a Sunday ride. ✌️@marcmarquez93 is back on track riding the RC213V-S as he continues to further assess his condition ahead of the 2022 season. pic.twitter.com/ZjEbdINSOx

The RC213V-S is the roadgoing version of the RC213V prototype which Honda fields in MotoGP, and the Portimao outing squares with what Marquez told media after Honda Racing Corporation’s presentation of its 2022 motorsport activities, last Friday night (AEDT).

Honda had initially stated that its superstar rider would miss that appointment, ostensibly to focus on his recovery, a decision which raised questions about his condition.

After then releasing footage of Marquez riding a motocross bike, it advised that he would indeed be part of the HRC press call.

The 28-year-old has been sidelined from MotoGP action after injuring the same nerve in his eye as he did when he crashed in a Moto2 session back in 2011.

Having suffered double vision as a result, his eyesight has now improved, and he looks to have avoided the need for surgery this time around.

“If I’m riding a bike, it means I have a perfect vision and it looks like we don’t need surgery,” explained Marquez at the HRC call.

“But at the moment, I want to follow the advice of doctor. He wants to see in a GP circuit riding with high speed alone.

“I mean, doing a one-day test with a lot of laps. When I get tired, if I have some problems or not… My doctor wants to evaluate all these things before allowing me to be at the Malaysian test.

“So, first of all, to confirm I’ll be in Malaysia, I want to try more days and I want to try on a GP circuit to see because I want to be 100 percent sure when I start the pre-season I will be fixed and ready to do a normal season.

Malaysia’s Sepang International Circuit hosts the first Official Test of the year on February 5-6, which would be Marquez’s first ride on a MotoGP bike if he is fit.

As yet, there is no word as to how the day went, save for #93 tweeting, “Happy to feel the sensation of speed again!” in a post which includes a photo suggesting brother Alex Marquez, who competes for LCR Honda, was also riding an RC213V-S at Portimao.

That motorcycle is the same model which the older Marquez brother rode last year at the Circuit de Barcelona-Catalunya ahead of his comeback from a badly broken arm.

Meanwhile, new Honda Superbike World Championship rider Iker Lecuona says he has no knowledge of any possible plan to fill in for Marc Marquez early in the upcoming MotoGP season.

The former Tech3 KTM MotoGP rider had been linked to a possible replacement role should his compatriot still not be ready to ride at Qatar in March.

“I cannot say anything,” said Lecuona at the aforementioned HRC event.

“I read a lot of news in the media but for my side, if I’m honest, my manager never told me anything about this or about [riding] the MotoGP bike.

“For Marquez, I think he will do the first race in Qatar so I can’t say nothing because I know nothing.”

The next official MotoGP track activity is the Shakedown Test, for rookies and test riders, at Sepang on January 31-February 2.