Sam Sunderland says his second Dakar Rally title is better than his first in 2017.

The GasGas rider got home with the eighth-fastest time on the 12th and final special stage of 2022, enough to prevail by 3:27s overall.

Sunderland had taken a 6:52s margin into the last day, marking him as a firm favourite to win the rally, but Honda’s Pablo Quintanilla went on a charge in a bid to wipe that out on the 164km special between Bisha and Jeddah.

It made for a nervous finish for the Briton before he knew that a second Dakar crown was his.

Sunderland’s previous such triumph came with KTM, its 16th in an astonishing winning streak of 18 in a row for the Austrian manufacturer.

He was named a rider of sister marque GasGas last November, and made it 19 Dakar titles for the broader KTM family less than two months later.

“That 10-minute period waiting at the end of the final stage to see if I’d won felt like a lifetime.

“But this feeling, knowing I’ve won a second Dakar, will stay in my memory forever.

“This win feels better than the first as this victory was anything but easy. The times were so close this year and there was no time to let off the gas, it was a really close race, right to the end.

“All of the hard work, the sacrifices, and everything that the GasGas team has done for me makes it all worthwhile.

“It’s been five years since my first Dakar win, and it’s been a long time to wait! I’m super happy to get another win and claim the first one for GasGas.

“Everyone on the team has worked so hard to achieve this and it’s a true team effort – together we got the job done. Amazing.”

Sunderland won just the one stage at Dakar 2022, but led overall from Stage 2 to Stage 6, also at the end of Stage 8, then decisively got back on top on Stage 11. 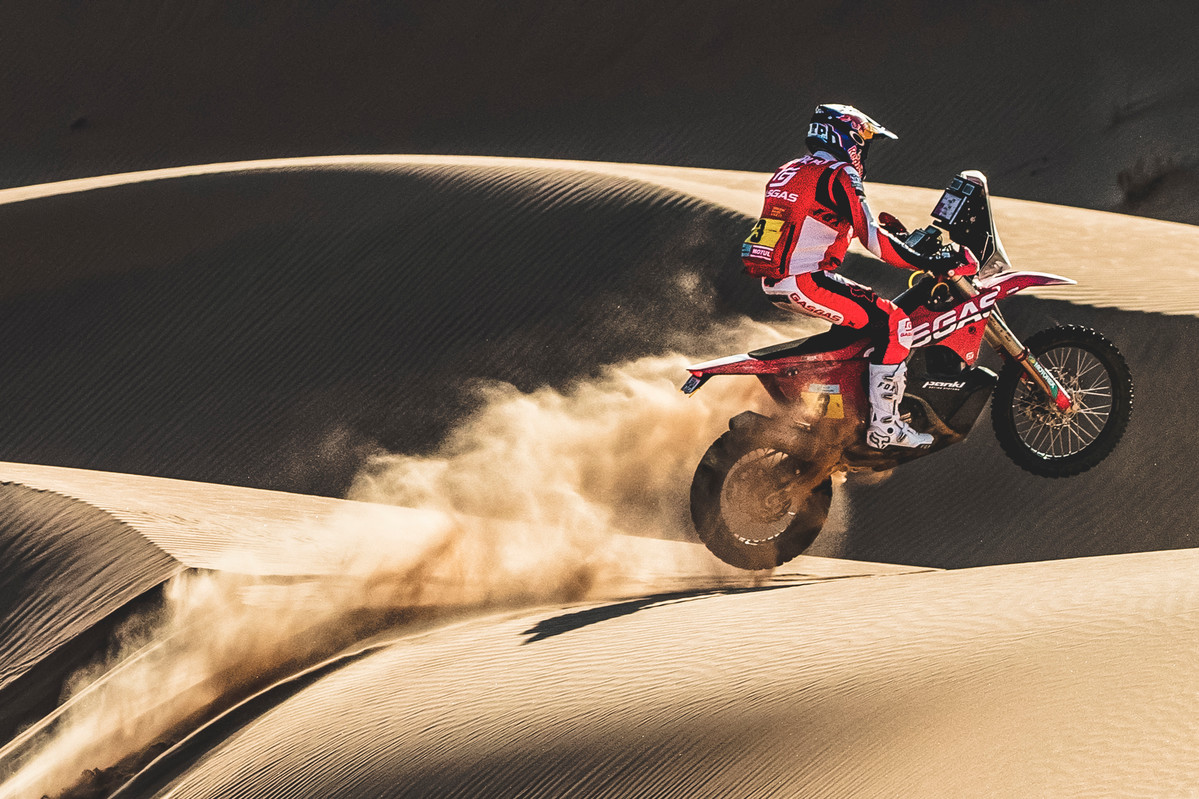 Sunderland in a crucial ride on Stage 11

GasGas Factory Racing team manager Norbert Stadlbauer had high praise for him and the team.

“This Dakar was a really challenging race, right until the very end, so to win, it’s an incredible achievement.

“Throughout the whole event, Sam was smart, strong, and his speed was exceptional.

“I’m really happy for him and the whole of GasGas Factory Racing.

“The entire team has worked so hard to be successful and it’s a really special moment. There’s no feeling like it.

“I’d like to thank all of the team’s sponsors and partners, everyone in Austria, and now, after a two tough weeks, it’s time to celebrate!”

Fellow GasGas rider Daniel Sanders was also well in contention until he crashed into a kerb on his way to the start of Stage 7, fracturing his left elbow and wrist.

The team has advised of the Australian, “the good news is that’s he’s had surgery and is now well on the way to making a full recovery.

Fellow Australian Toby Price, on a Red Bull KTM Factory Racing entry, was classified second in the final stage after a penalty was issued to Honda’s Ricky Brabec, the original runner-up on the day.