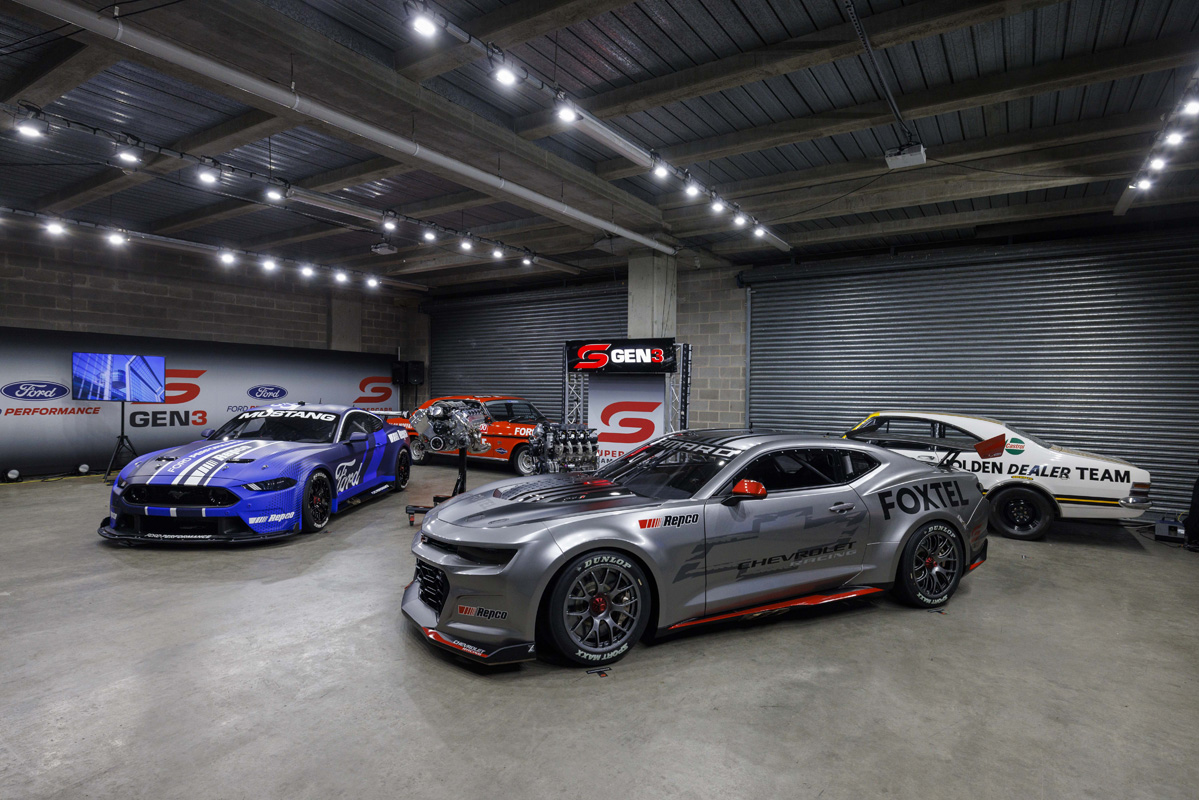 Testing of Supercars’ updated Gen3 prototypes will commence on Monday as part of four planned track days in quick succession.

The new Ford Mustang and Chevrolet Camaro will be running at Queensland Raceway on Monday and Tuesday next week (January 17 and 18).

Another two tests will take place at the same venue on January 24 and 25.

Each day, there’ll be two drivers allocated to each car.

Drivers of homologation teams Triple Eight Race Engineering and Dick Johnson Racing will take the lead in week one; Shane van Gisbergen and Broc Feeney running in the Camaro, and Will Davison joined by Zane Goddard in the Mustang.

Goddard, who is set to be sidelined for the 2022 Repco Supercars Championship, was drafted in given that Anton De Pasquale is away competing in the Dubai 24 Hour.

For week two, Erebus Motorsport duo Will Brown and Brodie Kostecki will jump in the Chevrolet, while James Courtney and Tim Slade will be steering the Ford.

For the likes of Goddard, Kostecki and Slade, it will mark their first opportunity in the Gen3 prototype – which has been modified since completing demonstration runs at Bathurst last month, including the addition of anti-rollbars.

“We want two drivers in each car, because we want to keep pounding away and getting the kilometres on it,” Supercars head of motorsport Adrian Burgess told Speedcafe.com.

“They are going to be hot days so we want to make sure we have got two drivers ready for each car.”

The driver schedule proves Supercars will make testing a transparent process, Burgess noted, with no discernible advantage to the respective homologation teams.

“Eventually, we’ll get as many of the drivers through as we can,” he said. Tim Slade will soon get a taste of the Gen3 Mustang prototype. Picture: Ross Gibb

“We’re not wedded to just Broc and Shane and Will [Davison] and Anton.

“Like we have said all along, we’re going to be transparent and we want as many of the teams and as many of the drivers to cycle through and help with the load and drive the car, because getting more feedback is important to the programme.

“We’re not going to design the car around two drivers, we’ve got to have as many drivers as we can drive them.

“There will be other engineers; we’ve invited a few other people to come and observe and get involved with the programme at the test day, so this is Supercars delivering on being transparent with what we’re doing.

“All the documentation has been standardised, so all the set-up sheets and the run sheets are on the standard document between the two cars and all the data and information as we’ve said before will be distributed up and down pit lane.

“We don’t want people thinking that two teams are getting an advantage. They’re not. Everyone will be able to come and contribute and access the data and see exactly what is going on.”

Beyond the quartet of QR days – which acts as a good starting point given its proximity to Supercars’ technical staff and both Triple Eight and DJR; not to mention it being renowned as a technical circuit – a variety of tracks will be used.

“So at the moment we’re roughly thinking after these four days at QR, we may do another day at QR then we’ll more than likely come down to Victoria and run a couple of days at Winton,” Burgess explained.

“Then we are likely to head to a high-speed circuit so we’ll probably go to SMP; if not, after the AGP there’s a couple of dates available at Phillip Island.

“So we’ll make sure we do at least one of those, and then we’ll be looking at places like whether we can stay on in Tasmania and do some brake testing, because obviously that circuit is very heavy on brakes so it’s quite a good place to do that.

“We know ourselves, engineering-wise, some of the targets that we need to fix and we need to sign off, so we’ll just navigate our way through that.

“When and where we’ve completed four days at QR, we’ll hopefully know that the car runs reliable, runs fine, and we’ll know what issues we have got, so we’ll tailor the programme just depending on the outcomes we’re achieving.”

Gen3 will make its competitive debut in 2023 – a decade after the Car of the Future platform was introduced.