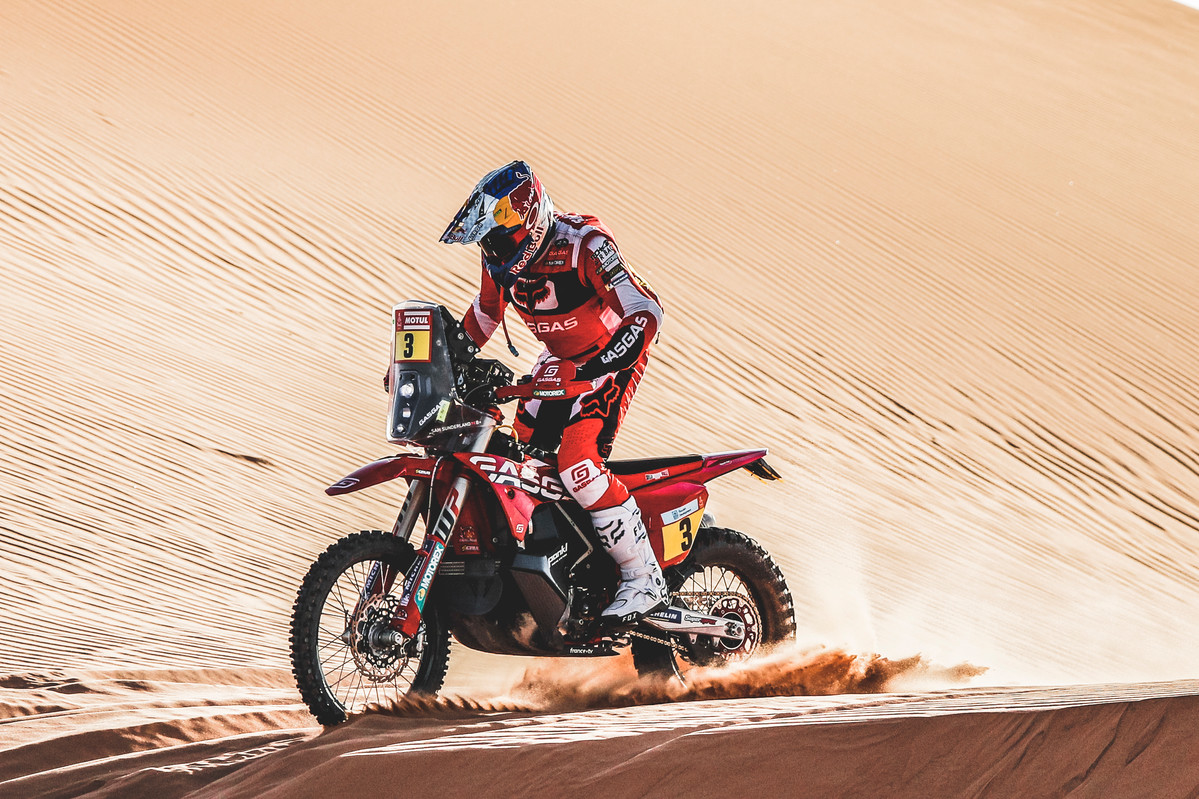 GasGas Factory Racing’s Sam Sunderland has won a second Dakar Rally title after finishing ninth on the 12th and final stage of the 2022 event.

The Briton ended up prevailing by 3:27s in the Bikes classification to deliver GasGas its first crown in rally-raid’s blue riband event, five years after he triumphed for sister marque KTM.

Toby Price, on another of the Red Bull KTM entries, remained 10th overall after setting the third-fastest time on the stage.

Sunderland had been the overall leader for much of the fortnight and started the final day with a 6:52s margin over the rest of the field.

While that last stage was a 680km affair from Bisha to Jeddah, only 164km of the journey represented special stage running.

There was therefore little opportunity for Quintanilla or Walkner, the only two who had a realistic chance of denying Sunderland, to make up ground.

That Quintanilla failed to gain enough on Sunderland was not for lack of trying, however.

The Chilean went out hard from sixth in the road order and was fastest to Kilometre 39 waypoint, 1:20s quicker than the man to beat.

He continued to set the pace at Kilometre 81, at which point he had chipped a total of 2:16s out of the buffer which Sunderland enjoyed.

Quintanilla’s team-mate Ricky Brabec, the 2020 Dakar champion, took over the ascendancy by Kilometre 120, while Quintanilla himself stretched the gap between himself and Sunderland to 2:20s.

The Chilean was back on top of the stage leaderboard at the finish line, five seconds up on Brabec, but only with a margin of 3:25s to Sunderland.

Price was starting 28th on the road after a drama finding a waypoint on Stage 11, and hence flew under the radar as Dakar 2022 came to a close.

However, the two-time Dakar champion was somewhere in the top four for the duration of Stage 12 and ultimately clocked the third-fastest time, only 18 seconds slower than Quintanilla.

Walkner ended up eighth, 28 seconds up on Sunderland, with Lorenzo Santolino (Sherco TVS Rally Factory) rounding out the top 10.

Fifth overall goes to Barreda, who persevered with shoulder pain after a big crash on Stage 5, with the top 10 rounded out by Ricky Brabec, Cornejo, Andrew Short (Monster Energy Yamaha), Klein, and Price.

Tech3 KTM’s Danilo Petrucci, who made history by becoming the first MotoGP rider to win a stage of the Dakar Rally, was 34th-quickest on the final stage and 90th overall (68th in the Rally 2 group).

Daniel Sanders also looked a good chance of winning the event for GasGas Factory Racing before he fractured and elbow and wrist in a highway crash, while Nomadas Adventure’s Andrew Houlihan broke ribs after an incident on his KTM.