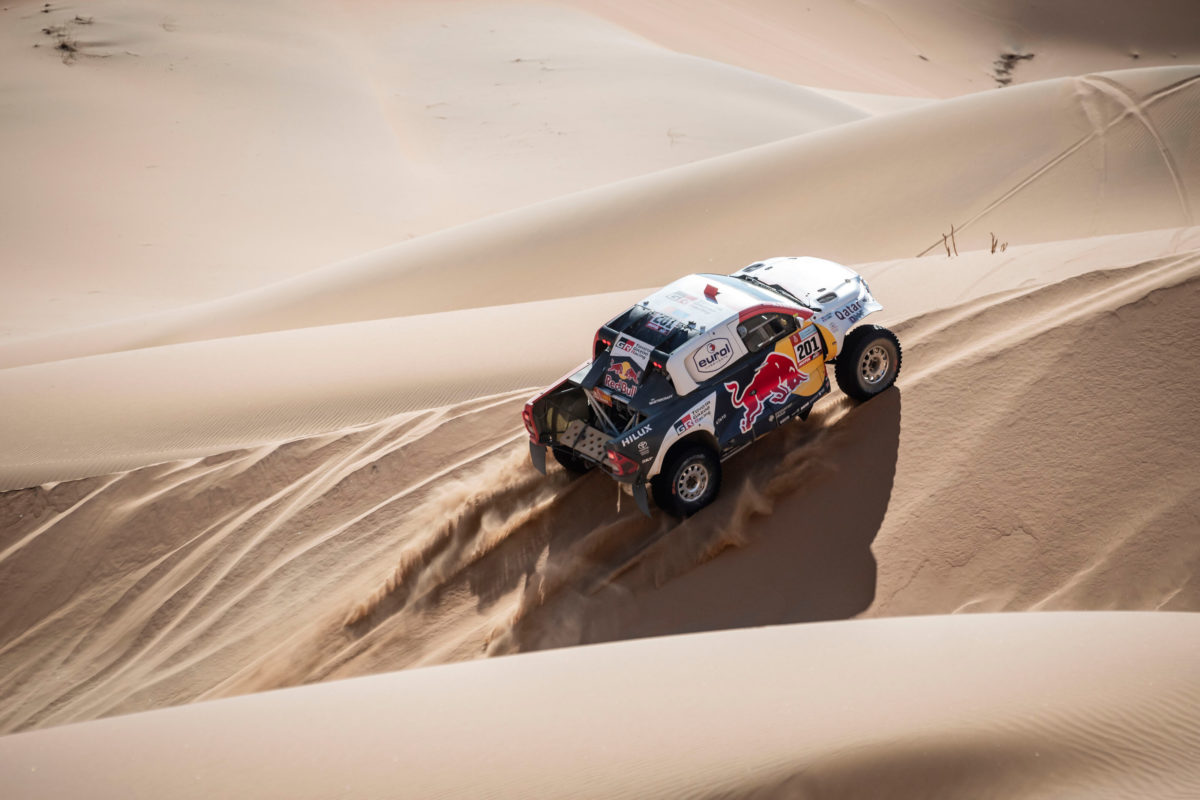 Nasser Al-Attiyah will take a lead of more than half an hour into the final stage of the 2022 Dakar Rally after a solid performance on the penultimate day.

The Toyota Gazoo Racing driver had gone slower than his nearest rival for the crown, Sebastien Loeb, on Stage 11, but by barely more than four minutes.

However, Loeb would be issued a five-minute penalty for speeding in a restricted zone, meaning the gap between them actually grew, to 33:19s with just a relatively short special to come.

Speaking before word of the penalty came through, Al-Attiyah was satisfied with his output on the 346km special around Bisha.

“It was a difficult stage and not easy because we had to think a lot,” said the Qatari.

“But, to lose only four minutes or something to Seb, it’s nothing, you know?

“We are in a good way. Tomorrow is a shorter stage. We just need to continue like this on the same pace.”

Team Audi Sport’s Carlos Sainz came out on top on Stage 11, his second win of Dakar 2022 and the fourth for the hybrid RS Q e-tron package.

The Spaniard was a front-runner all the way, while Loeb was initially classified second for the day in his Bahrain Raid Xtreme (BRX) Prodrive Hunter until the penalty which bumped him back to eighth.

Overdrive Toyota’s Lucio Alvarez instead ended up in second position, at 3:10s slower than Sainz, with Audi’s Mattias Ekstrom third.

Nani Roma was fourth in the second of the BRX Hunters, Toyota Gazoo Racing’s Giniel De Villiers took fifth, and Stephane Peterhansel made it all three Audis in the top six.

Al-Attiyah wound up seventh, while Loeb’s 4:21s gain on the three-time Dakar champion turned into a 39-second loss as he was put back to eighth for the stage.

Overall, Overdrive Toyota’s Yazeed Al Rajhi is third, more than half an hour behind Loeb, from BRX’s Orlando Terranova and De Villiers.

Ekstrom is ninth, Sainz 13th after navigational dramas and damage earlier in the event, and Peterhansel 57th after copping a big penalty for failing to finish Stage 1B when he broke an axle on a rock.

All that is to come now is the return to Jeddah, a 680km journey, but one which includes a special stage of only 164km.