Sunderland moves to sizeable lead on second-last stage of Dakar

Sunderland moves to sizeable lead on second-last stage of Dakar 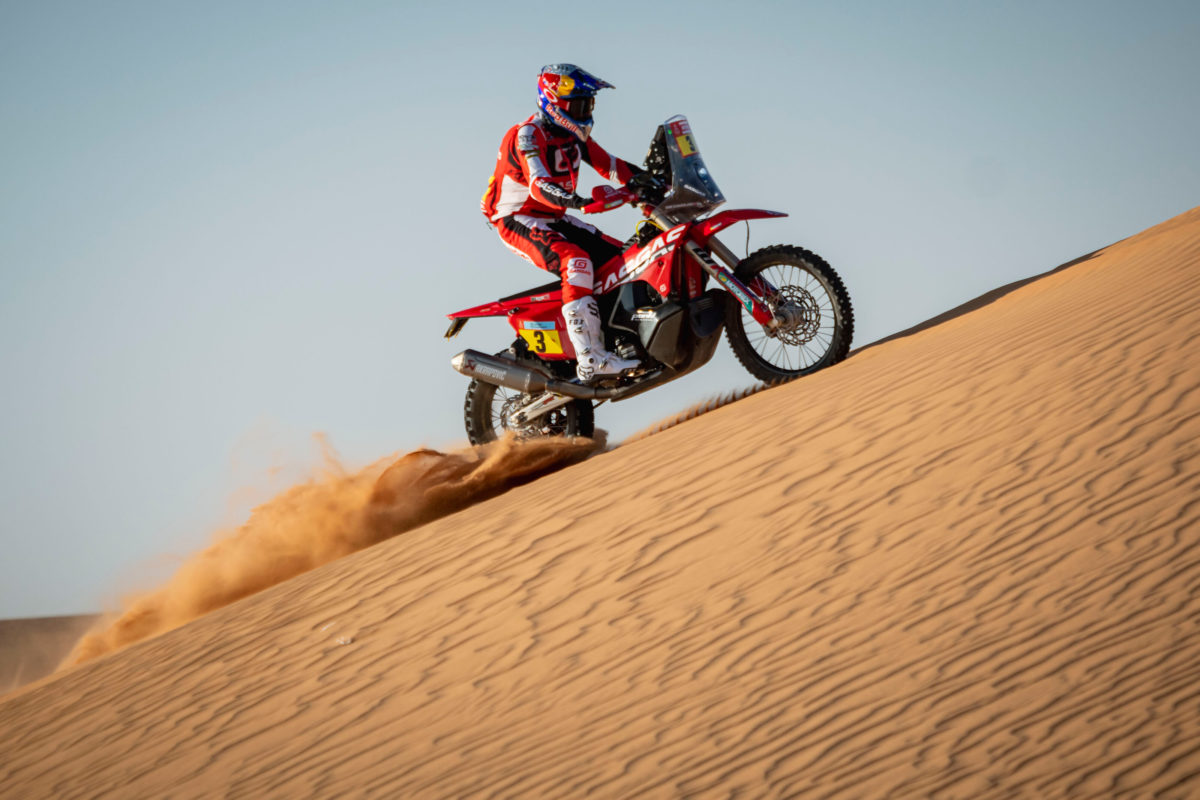 GasGas Factory Racing’s Sam Sunderland has moved to an overall lead of almost seven minutes after finishing second on the second-last stage of the 2022 Dakar Rally.

The Briton set the pace for most of Stage 11 of the event, a loop near Bisha, but was ultimately pipped by Red Bull KTM’s Kevin Benavides by four seconds.

Still, Sunderland was much quicker than those who mattered, including beating pre-stage rally leader Adrien Van Beveren by more than 21 minutes.

Having started the day 5:59s behind Van Beveren, he now holds sway by 6:52s over Monster Energy Honda’s Pablo Quintanilla, with Red Bull KTM’s Matthias Walkner back up to third spot at another 23 seconds back.

With just a relative short, 164km special stage to come, Quintanilla and Walkner appear longshots for the title now, and Van Beveren especially so given the Monster Energy Yamaha rider fell to 15:30s off the pace.

Toby Price dropped from sixth to 10th overall, 52:27s off top spot, after setting the 28th-fastest time on the penultimate, 346km special.

The Red Bull KTM rider had the task of opening the road on one of the more challenging stages after prevailing on the day prior, and so it was that he was 8:30s off the pace to the first waypoint, at Kilometre 43.

It got little better for Price from there, as he reached the finish line with a time 30:47s slower than team-mate Benavides’.

Five riders were vying for the stage lead initially, those being Walkner, Sunderland, Quintanilla, Hero Motorsports’ Joaquim Rodrigues, and the aforementioned Benavides.

The latter had resumed with a mammoth penalty against his name after failing to finish due to a mechanical problem on Stage 10, and was presumably given the task of helping team-mate Walkner if needed.

As it turned out, Benavides bounced back with a stage win, albeit one which is little more than a consolation as he prepares to hand over the #1 plate which he earned by taking the Dakar crown last year.

He and 2017 Dakar champion Sunderland built a margin of a minute or so over the rest at the second waypoint, 127km in, and that was how it remained until the end.

Van Beveren, who was fourth to start the stage, was never in the hunt once he ceded around 13 minutes relative to Benavides and Sunderland by the first waypoint.

He and Price were not alone, with those who started between them, namely Luciano Benavides (Husqvarna Factory Racing) and then Joan Barreda Bort (Monster Energy Honda), finishing with the day’s 26th- and 21st-fastest times respectively.

Stage 12 takes the field back to where it started, a 680km journey to Jeddah including the 164km special.