A badly broken right arm caused Marquez to miss virtually the entirety of the 2020 season and the first two rounds of that which followed, then he struggled for the rest of 2021 due to a lack of strength through his right shoulder.

Now, the Spaniard is injured again, having been diagnosed with double vision after a training crash which forced him out of the final two rounds of last year.

Once again, there is a not insignificant chance that he will miss the start of the campaign, with Repsol Honda having not yet forecast a return date, at least publicly, for its superstar rider.

Stoner, whose visit to the MotoGP paddock coincided with #93’s absence from those latter rounds of 2021, says that a crash in and of itself should not trouble Marquez greatly.

However, “injuries definitely affect you,” according to the man who won championships with Ducati and Honda, as would the resultant lay-off.

“Whenever I had a crash in a session, unless I was really injured, there was nothing really stopping me from going back out on another bike, as long as it’s close enough in set-up,” recalled Stoner.

“It’s like, ‘Right, I know where I went wrong there, a little mistake that I made.’

“I was sort of always very cautious of crashing – I never wanted to crash – but I never got scared of mistakes that I made.

“I would say for Marc, it’s a little bit different situation.

“He’s come through a very big injury with a very long recovery, with a lot of complications.

“That’s going to take its toll, that will take a little bit of time for you to get over mentally and physically as well.”

Illustrating the point, Marquez could not manage a podium in his comeback period until the field arrived at the first anti-clockwise circuit of the season, namely the Sachsenring.

With the predominantly left-hand corners taking the load off his weaker side, he went and won that race, nearly snatched victory when the same applied again at Aragon, and then prevailed at the other anti-clockwise track at which he raced last year, that being the Circuit of The Americas.

The win he took a round later at Misano, nowadays a clockwise layout, he described as his “most important of the year” for that very reason, but admitted turning right was still somewhat of a struggle. 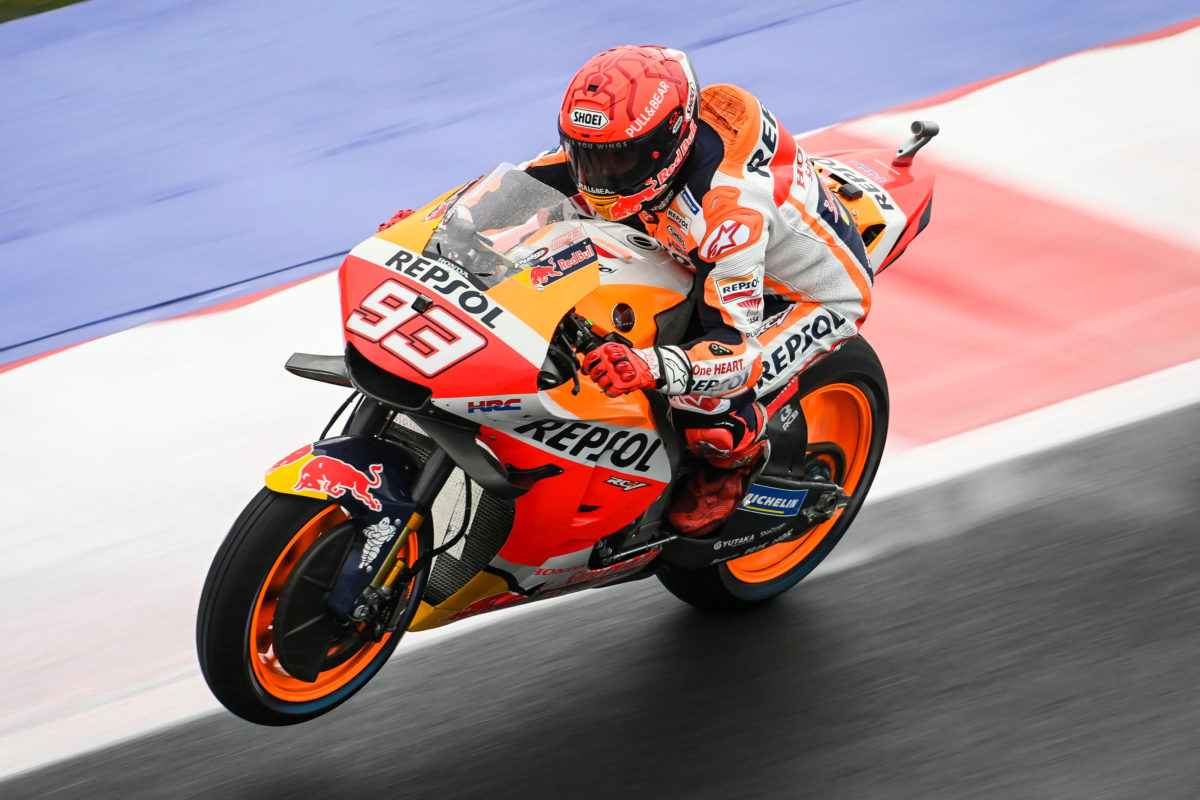 Marquez on his Honda

“As much as people probably don’t think physically it takes that long to come back, it’s incredibly long,” added Stoner.

“Even when I had my ankle surgery and I wasn’t allowed to walk for a few months, my thigh disappeared, there was like no muscle; it just disappears so quickly when not in use.

“So, his arm and shoulder and everything would take so much time to try and build up that years of training again, and there’s also no way to replicate riding a MotoGP bike.

“As much as you can train, doing all sorts of other things, [even] on a Superbike, they do not – even remotely close – replicate what you go through on a MotoGP bike.

“Because he’s not able to go test and train on that, you’re not building all those muscles again, so it’s just going to take time.

“Then of course, there’s the fear of that kind of injury happening again, so it’s impossible to know what Marc’s going through, but the last year and-a-bit has been certainly tough for him.”

While the Repsol Honda Team has since announced that its own season launch will be held on February 8, as an online affair involving both Marc Marquez and team-mate Pol Espargaro, tomorrow’s appointment will feature three Honda riders only.

Those are Espargaro and LCR duo Alex Marquez and Takaaki Nakagami, with the other Marquez said to be focusing on his recovery from injury.

Despite him being cleared to continue physical training just before Christmas, doubts remain that Marc Marquez will ride this pre-season.

Italy’s Corriere dello Sport has even linked new Honda rider Iker Lecuona, who had joined the Japanese marque to compete in the Superbike World Championship, to a possible injury replacement role.

Lecuona was signed up after losing his ride at the Tech3 KTM MotoGP team.

MotoGP’s 2022 Shakedown Test, for test riders and rookies, will be held at Sepang on January 31-February 2, and the first Official Test on February 5-6 at the same circuit.