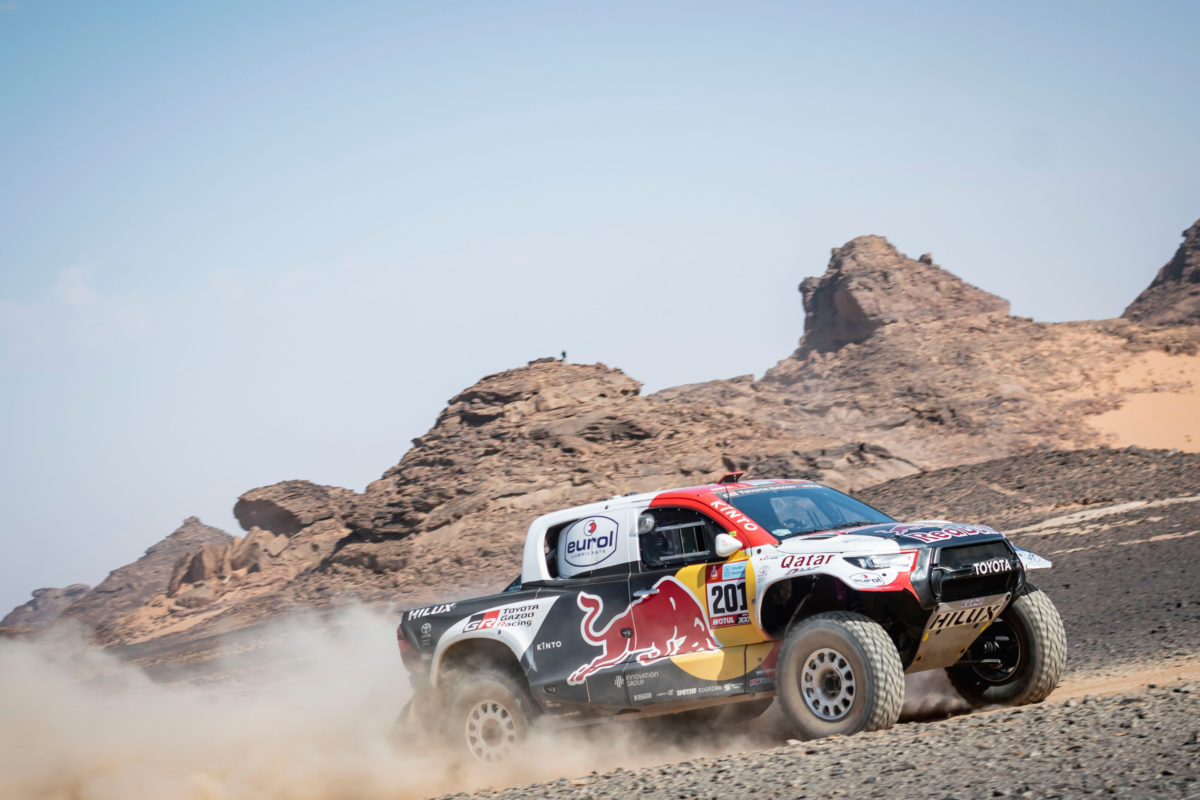 Nasser Al-Attiyah’s Dakar Rally lead over Sebastien Loeb has been cut as a result of a penalty issued after he had gapped the Frenchman on Stage 9.

Al-Attiyah was third-fastest in an all-Toyota Gazoo Racing top three on the latest stage of the event, two positions and 1:07s up on Loeb.

That had put the Hilux driver 39:05s up on Bahrain Raid Xtreme’s (BRX) team leader at the head of the overall standings, but it is back to 34:05s after he was penalised for a safety breach on Stage 8.

Specifically, stewards found that Al-Attiyah and co-driver Matthieu Baumel did not have their seatbelts properly fastened for almost two minutes after stopping to change a puncture.

“After boarding the vehicle, the driver engaged the gear and started the vehicle,” read the stewards report.

“Furthermore, the [onboard] video shows that the crew was busy for 1 minute 45 seconds properly fastening the seat belts.

“For a short time, the co-driver even held the steering wheel to give the driver the opportunity to fasten his seat belt.”

The rest of the overall top five is Overdrive Toyota’s Yazeed Al Rajhi in third, 53:44s back from Al-Attiyah once the penalty is accounted for, from BRX’s Orlando Terranova and Toyota’s Giniel De Villiers.

The latter won the latest special, a 287km affair in a loop around Wadi Ad Dawasir, after getting the upper hand on team-mate and early stage leader Henk Lategan.

Those two were separated by just nine seconds at the finish line, with Al-Attiyah another 55 seconds slower.

“We pushed hard, from the start to the end. There were no mistakes with the navigation, but one little puncture where I tried to be a bit aggressive in the stones because I need to regain some time.

“So, we had to change the wheel, but apart from that we drove a clean stage without problems”.

The other Audis were also in the top 10, with Carlos Sainz sixth and Stephane Peterhansel eighth.

“It was the first time in my life that I had opened a Dakar stage,” said Ekstrom after his maiden stage win on the day prior.

“I didn’t push too much, but I think we did a pretty good job. It was a great experience for us.”

Three stages remain in Dakar 2022, the next being a 759km journey from Wadi Ad Dawasir to Bisha which includes a 375km special.