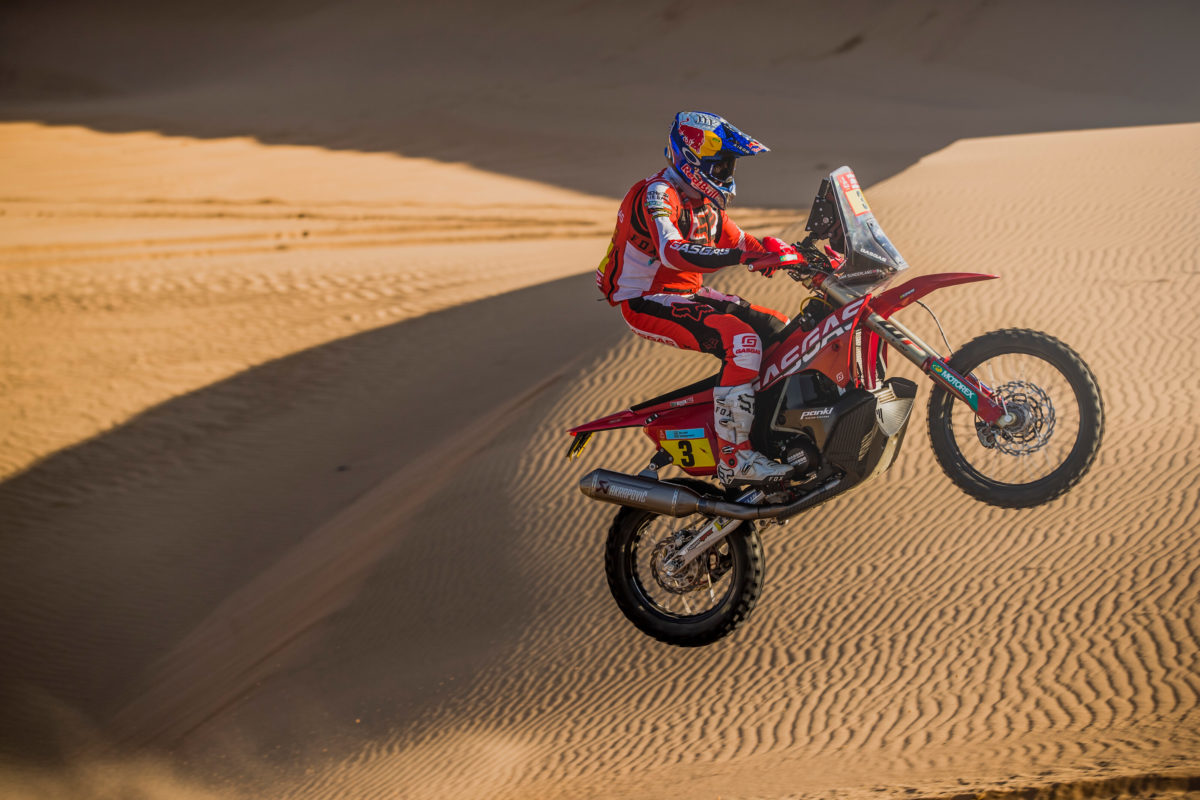 Sam Sunderland has regained the lead of the Dakar Rally with an all-the-way win on Stage 8, while Toby Price is finally back into the overall top 10.

Sunderland had ceded top spot when he was only 28th-quickest on the day prior, but hit back by taking out the Al Dawadimi-Wadi Ad Dawasir stage by a margin of 2:53s.

The GasGas rider is 3:45s to the good in the overall classification, with Red Bull KTM’s Matthias Walkner second and Monster Energy Yamaha’s Adrien Van Beveren dropping from first to third.

Price moved up from 11th to ninth for the rally but, in finishing sixth on Stage 8, the Red Bull KTM rider ceded 8:39s relative to Sunderland and is now an enlarged 32:30s from the top.

Sunderland was quickest to every waypoint on the 395km special, making for his first stage win of Dakar 2022, while the battle for second ended up being a duel between Monster Energy Honda’s Pablo Quintanilla and Walkner on the leading KTM entry.

Quintanilla might have prevailed in that battle, but Walkner is 2:19s closer to the overall lead, having trailed Van Beveren by 5:12s at the start of the morning.

Quintanilla and team-mate Joan Barreda Bort, the latter of whom was in doubt due to injury just days ago, are fourth and fifth in the rally overall.

Quintanilla is 47 seconds behind Van Beveren and 5:30s off the overall pace of Sunderland, Red Bull KTM’s Kevin Benavides’ hopes of going back-to-back took a hit on Stage 8.

The Argentine was second onto the road and steadily gave up time relative to Sunderland, losing a total of 15:02s at the finish line.

Benavides was 13th on the stage and dropped from third to sixth overall, 14:47s away from first position.

Meanwhile, GasGas Factory Racing’s other rider, Australian Daniel Sanders, says he is “really lucky to be alive” after the crash on the opening liaison for Stage 7 which has sidelined him from the balance of the event.

Stage 9 is made up of a 491km loop around Wadi Ad Dawasir which includes a 287km special.