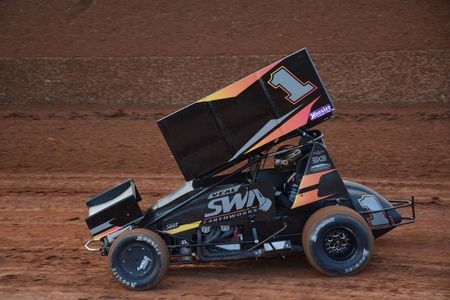 Luke Oldfield led for much of the race before he had to stop in order to avoid collecting a spun car, and would go on to finish fourth, behind Veal, Matthew Dumesny, and Jack Goodyer.

At the drop of the green to get the feature underway at Archerfield, Oldfield led the pack through Turn 1 as Californian World of Outlaws star Carson Macedo got high and invited Matt Dumesny to assume second position.

The first interruption came on Lap 2 to retrieve an immobile Bryan Mann from Turn 2, then another when Ryan Newton ended up upside down in a three-car incident.

When racing finally resumed, Oldfield faced little pressure from those behind.

Macedo was quickly back in second spot with James McFadden slipping into third, before back-to-back restarts were required when Ian Madsen stopped in Turn 4 on Lap 6 and then Fanning did likewise a lap later.

Oldfield maintained his lead throughout the interruptions, another of which came on Lap 11 when Macedo became parked at Turn 4, triggering other cars to end up in the infield.

Dumesny again took on the role of principal pursuer, with Adam Butler having a blinder in third.

Oldfield was still looking comfortable out front until Lap 17, when he had to stop having happened upon a stationary Madsen and Brendan Quinn at Turn 4.

That put the erstwhile leader to the back with 18 laps still to run, with Dumesny finding himself leading the parade from Butler.

Goodyer pounced immediately to secure second position before another restart was needed to remove Pholi and Marcus Dumesny from opposite ends of the track.

Through a process of elimination, Veal was now fourth and another halt was called to proceedings when Reddecliff hit a slowing Fanning, the resultant contact sending Reddecliff upside down at Turn 1.

The final laps were completed without incident and, as Veal chased down Goodyer and then rounded up Dumesny to assume the lead.

Oldfield would fight his way back to fourth ahead of Kelly, Butler, Darren Jensen and Randy Morgan.