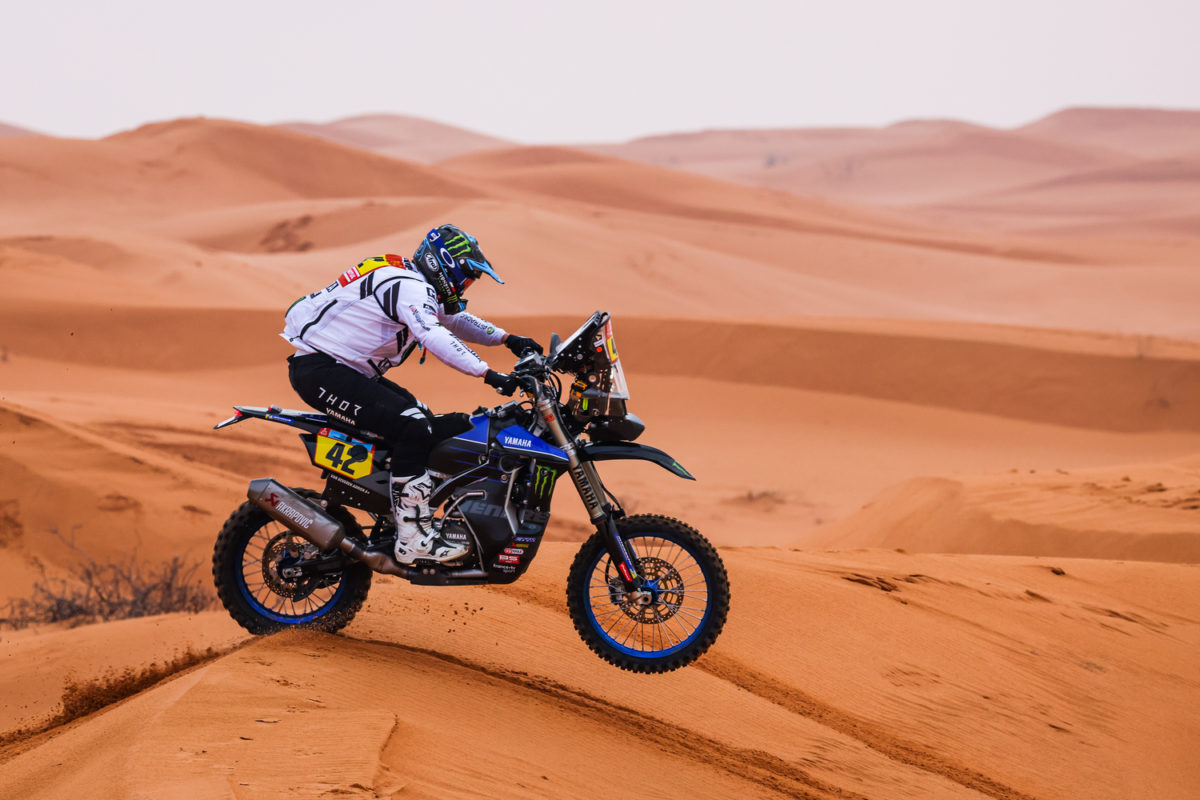 Monster Energy Yamaha’s Adrien Van Beveren has moved into the overall lead of the Dakar Rally after a dramatic Stage 7.

The resumption of competition after the rest day saw not only Australian title contender Daniel Sanders crash out of the event, but also his GasGas team-mate Sam Sunderland drop from first to fourth overall.

Monster Energy Honda’s Jose Ignacio Cornejo Florimo won the stage but Van Beveren is on top in the event classification by 5:12s, with Red Bull KTM team-mates Matthias Walkner and then Kevin Benavides filling out the top three.

On another Red Bull KTM, Toby Price is almost 10 minutes closer to the overall lead than he was when he started the day, but still has 29:29s to make up from 11th spot in the rally classification.

The two-time Dakar champion looked on for a vital stage win early in the 402km special between Riyadh and Al Dawadimi, going quickest to the Kilometre 42 and Kilometre 77 waypoints, then four seconds slower than the benchmark time to Kilometre 121.

However, from there, Price drifted, and he would set the ninth-fastest time of the day, although that still represented a gain relative to Van Beveren, Walkner, and Sunderland.

It was Cornejo who took over the stage lead from Price, and the Spaniard would not relinquish top spot.

Kevin Benavides was always thereabouts, the 2021 Dakar champion finishing the day second to Cornejo by 44 seconds.

Joan Barreda Bort, whose fitness was in doubt after a big spill on Stage 5, finished third in the special on his Monster Energy Honda, ahead of Husqvarna Factory Racing’s Luciano Benavides and Sherco Factory’s Lorenzo Santolino.

Not only did Sanders crash out on the liaison, that left Sunderland as the road opener.

While Van Beveren set the 10th-fastest stage time, and Walkner the 24th, Sunderland was all the way back in 28th, with much of his time lost between Kilometres 221 and 259.

Behind Van Beveren and Walkner in the overall classification, Kevin Benavides is only 11 seconds further back, and Walkner a further 15 seconds adrift.

Stage 8 takes the field 830km from Al Dawadimi to Wadi Ad Dawasir, including a 395km special.