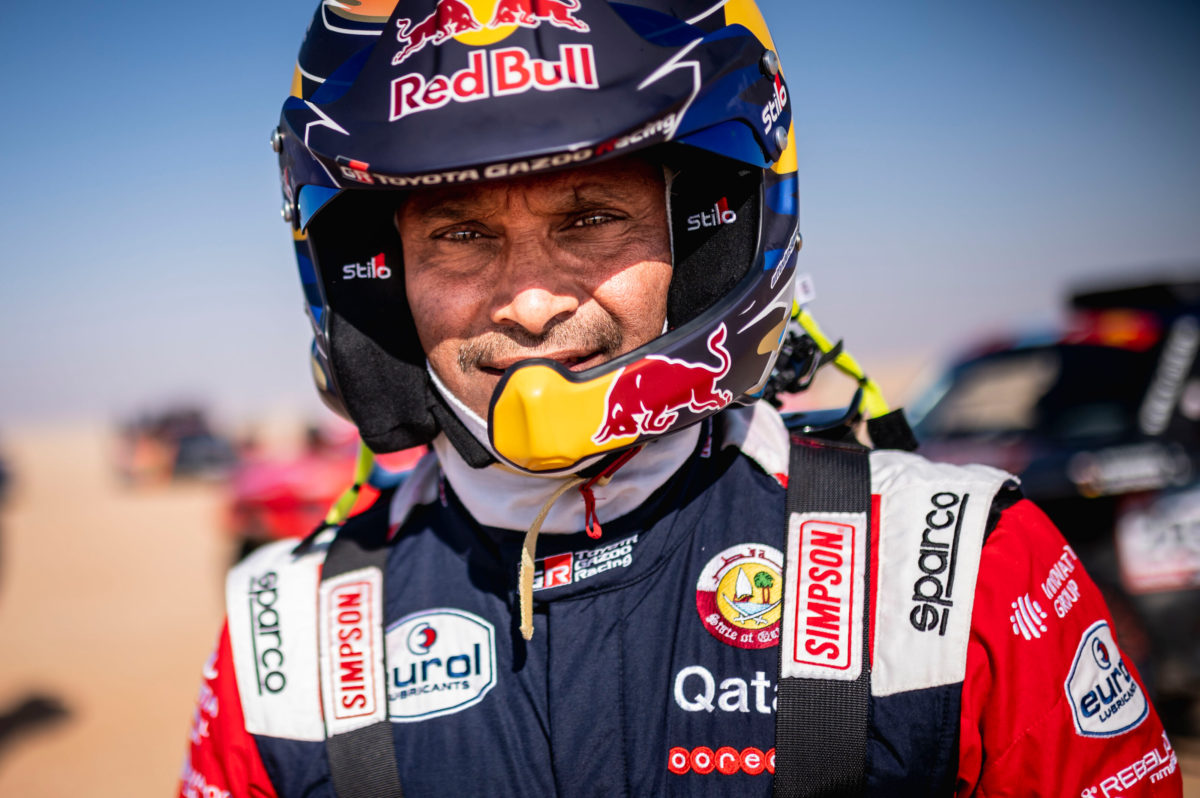 Nasser Al-Attiyah has pipped his nearest rival for the 2022 Dakar Rally title, Sebastien Loeb, to the fastest time on Stage 4 of the event.

The Toyota driver was 0:25s quicker than the Bahrain Raid Xtreme team leader on the 465km special between Al Qaisumah and Riyadh, stretching his overall lead to 38:05s.

Overdrive Toyota’s Yazeed Al Rajhi looked initially to have won the stage, but the Saudi Arabian was hit with a two-minute penalty which dropped him to fifth on the day.

Al-Attiyah had set the early pace before Toyota Gazoo Racing team-mate Henk Lategan hit the front at the Kilometre 120 waypoint.

However, disaster struck for the South African at 310km into the stage in the form of a problem with his Hilux’s right-rear wheel.

Lategan was forced to wait in the desert for his support crew, costing him well over five hours.

Last-stage winner Carlos Sainz inherited the lead in his electric Audi but had dropped back to third, behind Al Rajhi and Al-Attiyah, at the Kilometre 417 waypoint.

Sainz revealed after the stage, “We broke a transmission with 140km to go, so it cost us some time.”

Al Rajhi would have won by 14 seconds if not for the penalty, which not only handed honours to the lead factory Toyota driver but also saw Sainz onto the stage podium.

Yasir Seaidan, of the X-Raid team which won the last two Dakar titles in the Cars, ended up fourth in his JCW Mini 4×4.

Reflecting on the day, Al-Attiyah said, “It wasn’t too easy because we caught up with several vehicles at the start of the special and we decided to play it safe.

“The finale was very difficult, especially the part in the wadi, with plenty of navigation. Matthieu [Baumel, co-driver] did an excellent job and I’m pleased. We are moving in the right direction day after day.

“We tried to set a high pace, but our plan was not having to open tomorrow because there will be no bikes and, therefore, no tracks.

“But, even if we falter a bit tomorrow in these conditions, it will put us in a favourable position for the next day.”

Loeb was not too displeased at not winning the stage, for similar reasons.

“Overall, the special went without a hitch,” reported the Frenchman.

“We had to go fast while making sure not to hit a rock. We focused on the navigation and set a high pace. We ended up third [before Al Rajhi’s penalty], but having three cars within 40 seconds after 450km shows just how close this is.

“Finishing behind Nasser today to start behind him tomorrow is a good trade-off. There won’t be any bikes at the front, so the first cars will regroup, so it’s not bad at all.

“Tomorrow will be difficult: a big stage where things can happen. At any rate, our confidence in the car has been restored. It was a clean special.”

Sainz has moved up to 18th after his navigational mishap earlier in the rally, leapfrogging fellow Team Audi Sport driver Mattias Ekstrom, who is 22nd.

Stage 4 was another nightmare for their 14-time Dakar champion team-mate Stephane Peterhansel, who broke a shock absorber upon landing on a jump, a drama which also resulted in damage to his RS Q e-tron’s fan and radiator.

Officially, ‘Mr Dakar’ is now more than 37 hours behind Al-Attiyah in the event.